Vincent puts together best stretch to close out regular season 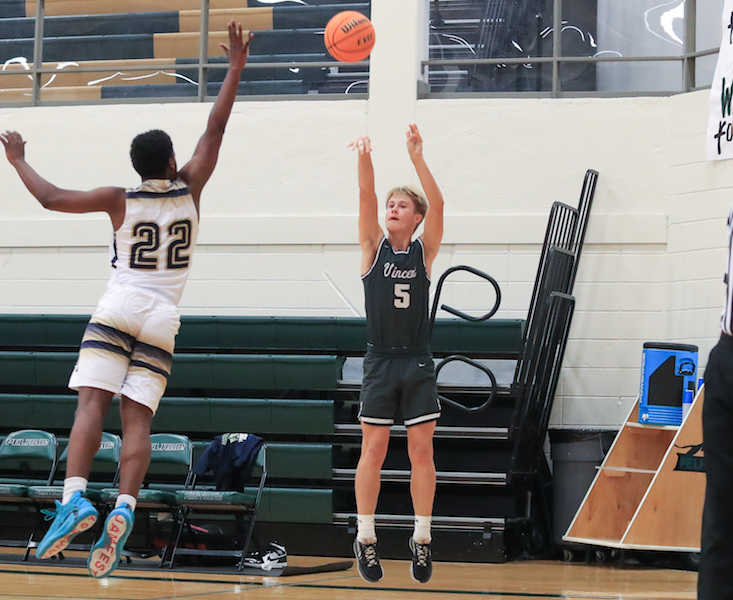 Vincent closed out the regular season with a 62-52 win against Ragland on Friday, Feb. 4 behind 28 points from Blake Allums. (File)

RAGLAND – Experiencing growing pains throughout the season, the Vincent Yellow Jackets seem to found a rhythm at the right time after winning their sixth game in the last seven on Friday, Feb. 4.

Taking on Ragland, the Jackets picked up a 62-52 win to continue the impressive stretch and finish the regular season with a winning record of 13-11 after sitting at 7-10 on Jan. 7.

The hot stretch is key in building the confidence of the Yellow Jackets, who will have to take on B.B. Comer in the opening round of the area tournament—a team that beat them twice in the regular season by four and seven points.

But to end the regular season, it couldn’t have gone much better than the effort the Jackets got in the 10-point victory against Ragland.

Blake Allums had one of his best games of the season, taking 20 shots and making nine of them in the win. He finished with 28 points thanks in large part to a 7-17 mark from beyond the arc.

Ty’Qun Goodman also had a big game with a double-double performance featuring 18 points and 17 rebounds.

Those two were big in helping Vincent get off to a strong start in the opening half.

The Yellow Jackets jumped up 4-0 and 7-4 before Ragland put together its first run to overtake the lead at 8-4. It was short lived, however, as Vincent responded with a basket to end the half, giving the Jackets a 9-8 advantage at the end of the first quarter.

Ragland regained the lead early in the second quarter and held a 9-12 lead for a slow stretch of the game.

Vincent, however, responded with a 13-3 run take control of the game with a 22-15 advantage.

That was part of a 21-point second quarter that allowed the Yellow Jackets to extend the lead to 30-22 at the halftime break.

Ragland spent the third quarter trying to claw from behind, eventually drawing to within three points late in the quarter and outscoring Vincent 15-13 in the period.

The Jackets, however, hit a late 3-pointer to take a 43-37 advantage heading to the final quarter of play.

That became the final blow for Ragland, as Vincent then extended the lead back to 10 points early in the final quarter.

Ragland got back to within seven but no closer.

In addition to Allums being the leading scorer, he also finished with two steals and two rebounds. Goodman was also good in several facets of the game, totaling five assists and three steals.

Jermarey Lawson was the second-leading rebounder with nine, while he also finished tied for the team lead with four steals. Skyler McCrimmon totaled eight points as the third-leading scorer for the Jackets, while Tray Youngblood totaled four points, four rebounds, five assists and four steals.