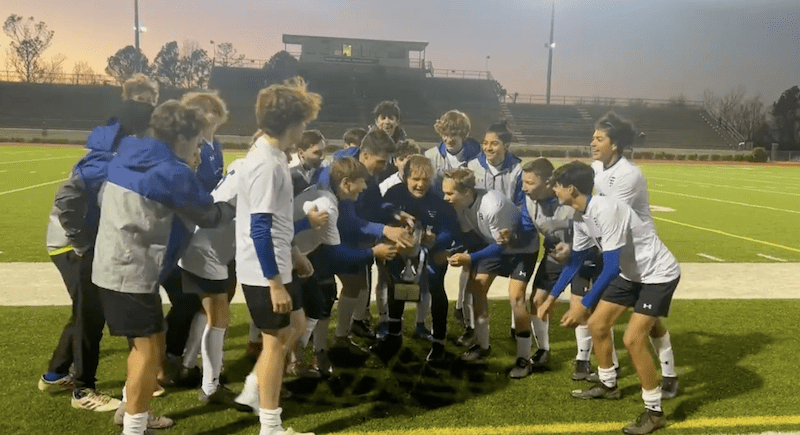 The Chelsea Hornets celebrate after beating Pelham in their final game of the Lakeshore Shootout on Feb. 5. (Contributed)

With that, seven local teams kicked off the season during the boys weekend of the event and put together impressive showings.

Competing alongside the Eagles in the Platinum division, the Spain Park Jaguars put together a finish of third behind Huntsville.

The Jags, who entered the season as the defending state champion and No. 1 team in Class 7A, picked up one win and two losses at the event to total 10 points.

The Jaguars won their opener 3-1 against Albertville to quickly grab nine points, but the offense struggled in the next two matches against No. 3 Huntsville and No. 15 Florence.

They fell 2-0 in the second game against Huntsville on Friday night before coming back the next day and dropping a tough 2-1 battle with Florence.

That got the Jaguars one more point to finish with 10 after a 1-2 start to the season.

Oak Mountain was the only local champion of the weekend, but it was Chelsea who garnered the most points in the Gold division.

Mountain Brook totaled 25 points to win the division, which featured some of the top talent in the state, but the Hornets were just behind with 21 points.

Chelsea and Mountain Brook were the only two teams to finish with two wins and no losses at the event, as each had one draw as well.

Grissom added no losses with one win and two draws, while Homewood finished with two wins and one loss.

Chelsea’s impressive event featured games against some of the state’s top teams, including Cullman, Hewitt-Trussville and rival Pelham.

The Hornets opened with a 3-1 victory against Cullman to start the season on a high note on Friday afternoon.

That set up a busy Saturday at two different venues.

They started the day at Calera’s Eagle Sports Complex, drawing with Hewitt-Trussville in a 0-0 tie, which earned four more points to bring their total to 13 points.

Then, Chelsea hit the road up to Pelham, where the North Shelby Derby took place between the two rivals.

In the final game of the weekend, it was Luke Miller’s first career goal that made the difference in a 1-0 win for Chelsea, bringing the Hornets’ total to 21 points.

With that loss, the Panthers finished the weekend with a 1-2 record and nine points at the event.

Both losses, however, came to two of the best teams in the state by 1-0 scores. In addition to the one-goal loss to No. 9 Chelsea, the fifth-ranked Panthers fell to No. 1 Homewood by a score of 1-0 as well.

Even with those low-scoring games, Pelham still gained nine points thanks to a 3-1 victory against Cullman.

Indian Springs was the next highest local finisher behind Chelsea in the Gold division with 13 points thanks to a 1-1-1 showing in their three games.

Competing against two higher classification teams, including 7A No. 3 Grissom, Hewitt-Trussville and 6A No. 16 Spanish Fort, Springs put together an impressive showing to total 13 points.

The No. 1 team in the 4A-5A classification showcased impressive defense in each matchup, as the three games were all decided by one goal or less.

They opened the event with a big 2-1 win against Spanish Fort to total eight points out of the gate, before then following that with a 1-1 draw against Grissom.

With 12 points, they then squared off against Hewitt-Trussville to end the event, losing a 2-1 battle for one more point.

Briarwood and Calera also competed in this year’s event, participating in the Silver division.

Both picked up at least one win, with Briarwood claiming third in the division with 17 points and Calera claiming fifth with eight points.

The Lions had difficult matchups against Northridge, Dunwoody (Georgia) and 4A-5A No. 6 St. John Paul II, but that didn’t prevent an impressive 2-1 showing at the event.

After opening the tournament with a 4-0 loss to Dunwoody, the Lions didn’t panic and responded with two big wins to close out the tournament.

It started later on Friday with a 1-0 victory against Northridge to pick up seven points. Then, the Lions put together their best showing of the event in the final game on Saturday with a 4-1 victory against St. John Paul II for nine more points and a 2-1 start to the season.

Calera found its success in the opening game of the tournament, beating Boaz 2-1 for eight quick points.

The Eagles then also lost to Dunwoody in a 4-0 shutout, before bouncing back a day later to put together a challenging effort against 4A-5A Montgomery Academy in a tight 1-0 loss.