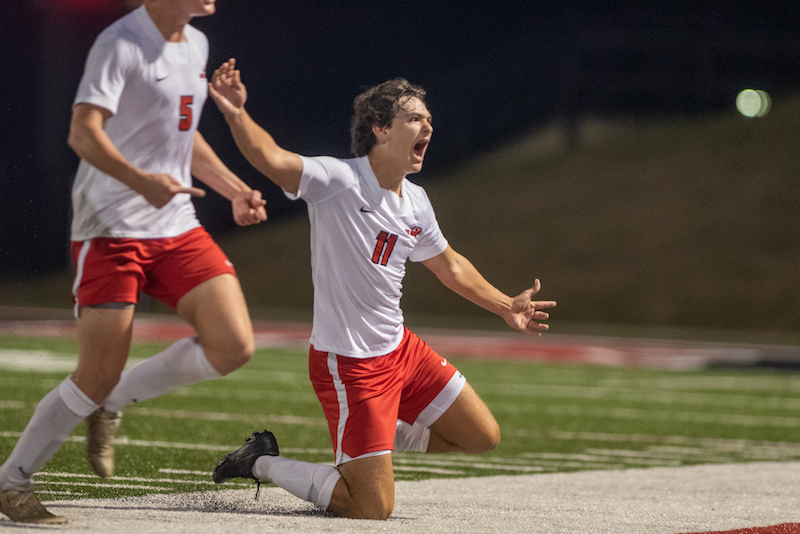 Oak Mountain’s boys soccer team started the 2022 season on a high note by winning the Platinum division of the Lakeshore Shootout. (Contributed)

CALERA – The Oak Mountain boys soccer team started the season with a bang Friday and Saturday, Feb. 4-5 at the annual Lakeshore Shootout.

Competing in the Platinum division of the tournament, which featured several powerhouse teams, the Eagles not only won both of their games, they did so by a combined score of 10-0.

With that effort, they did enough to edge out Huntsville and claim the championship for a big momentum boost to start the 2022 season.

Ranked sixth entering the season, Oak Mountain was in the same division as No. 1 Spain Park, No. 2 Hoover, No. 4 Huntsville, No. 13 James Clemens, No. 15 Florence and Albertville.

Oak Mountain and Florence were the only two teams not to drop a game, but the Eagles finished the event as the only team with a 2-0 record, while Huntsville finished 2-1 as the only other team with two wins.

With the event based on the point system, a win was worth six points, a tie worth three points, a loss worth no points, each goal (up to three) worth one point and a shutout worth one point.

That means the Eagles got their maximum amount of points at the event with wins of 4-0 and 6-0.

After opening the event with a 4-0 win against Albertville to gain 10 quick points on Friday, Feb. 4, the Eagles put together a clutch performance the following day.

Taking on Huntsville, who had beaten No. 1 Spain Park 3-2 and No. 2 Hoover 2-0 a day earlier, the Eagles faced arguably the top team at the tournament.

Oak Mountain, however, was slightly fresher having played just one game, and it showed in a dominant effort.

The Eagles showed they would be one of the state’s top teams this year by putting together a 6-0 shutout, which was crucial in helping them close out the championship win.

Oak Mountain had to get the shutout to earn the title, and the Eagles did just that, showcasing their defense, which was also impressive a season ago.

Spain Park finished the event in third with 10 points, while Albertville claimed fourth with nine points. Hoover and Florence each totaled eight points, while James Clemens had five.