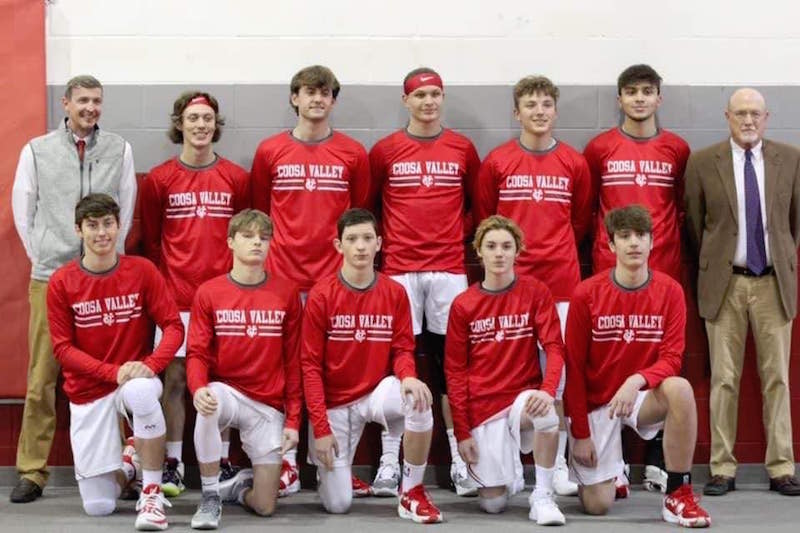 The Coosa Valley Rebels took down Jackson Academy on Tuesday, Feb. 8 to earn a spot in the AISA Final Four. (Contributed)

The Coosa Valley Academy basketball team advanced to the AISA Final Four after taking down Jackson Academy by 15 points on Tuesday, Feb. 8 in an Elite-Eight matchup.

The Rebels capitalized on a consistent effort in a 68-53 victory that saw six different players score, while the team totaled at least 13 points in each quarter of the game.

The first half of the game was a back-and-forth battle that saw the Rebels hold onto a slight lead throughout.

It started in the opening quarter, which was one of the two lower-scoring quarters in the game.

The Rebels missed both of their free throws, but they were able to knock down five field goals and one 3-pointer for 13 points in the period.

Jackson did hit one of its two free throws in the frame, while the Eagles also had two from beyond the arc.

Outside of that, however, the Rebels started on the right foot defensively, allowing two other field goals, which led to a 13-11 lead at the end of the quarter.

Coosa Valley then put together its first of two 19-plus quarters in the second quarter.

The Rebels had three players with at least four points in the frame to total 19 on the number, which was enough to outscore Jackson by two points for the second quarter in a row as the Eagles went 7-10 from the free throw line and totaled 17 points.

By outscoring Jackson by two in each of the first two quarters, the Rebels were able to take a 32-28 lead into the halftime break.

Out of the half, the game slowed down on the offensive end, as both defenses made adjustments that worked early in the quarter.

It led to the lowest-scoring quarter of the game, but that still meant 13 points for Coosa Valley.

The Rebels got five points from Konner Steele in the quarter, while Brayden Wilson and Ray Albright each added four points.

Defensively, they put together their best quarter of the game.

That led to Jackson being held to single digits, as the Eagles hit three field goals and three of their seven free throws to total nine points.

That allowed the Rebels to extend the lead by four more points going to the final quarter.

Still a tight 45-37 game to start the fourth, the Rebels saved their best offensive quarter for last.

They not only added eight more shots, but they knocked down six of seven from the free throw line in clutch fashion to polish off the win with a 23-point final period.

Jackson added 16 points in the frame, but it wasn’t enough to overcome the deficit.

Wilson and Albright each finished with 20 points, while Steele was just behind with 18 in a very balanced scoring effort from the three.

Coosa Valley’s Final Four game will come against Heritage Christian Academy on Friday, Feb. 11 in Montgomery. Heritage beat the Rebels 74-54 back on Jan. 24, meaning Coosa Valley will be looking to avenge that loss to punch a ticket to the state championship game.