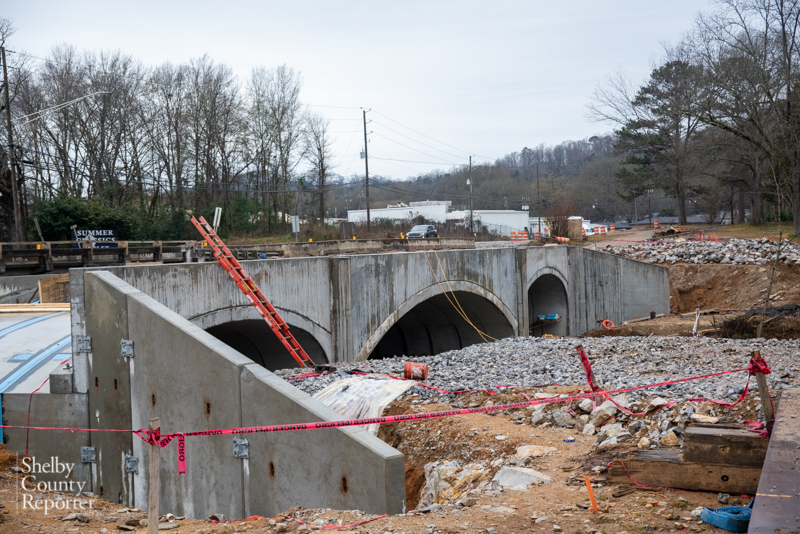 Major progress has been made in the construction of the County Road 52 bridge between Pelham and Helena. The projected finish date of the construction is September 2022. (Reporter Photo/Keith McCoy)

Construction on the bridge that lies on the border between Pelham and Helena on County Road 52 has made significant progress, according to the County Engineer Randy Cole.

The bridge lies on the border between the cities of Pelham and Helena and goes over Buck Creek.

The project began in summer 2021 and will be a complete replacement of the existing bridge. The new structure will be wider to accommodate the large amount of traffic that uses the bridge daily traveling between Pelham and Helena.

Cole said the project has been delayed due to several days of inclement weather.

“We’ve lost about 45 days to bad weather, so that’s something you have to build into the time of the job,” Cole said. “You can’t predict the weather.”

Cole said the replacement structure of the bridge has been built using precast modular arches made by Forterra, a company that manufactures concrete products for projects such as this. Cole said the backfill process of filling over the arches will begin soon.

The bridge was originally built in 1948, and Cole said it was due time for the bridge to be replaced.

“Everything we’ve done up to now has been maintenance,” he said. “It’s served its purpose but now it’s past its life cycle and it’s time to replace it.”

“Of course, the County Commission is charged with maintaining certain roads and bridges in the county,” he said. “This is one of those that we maintain. The old one has deteriorated and was in bad condition so we needed to replace that so vehicles could safely move east and west on County Road 52.”

The estimated cost of the project is $4.1 million paid by the county and by some federal funds secured by the County Commission.

The estimated finish date for the project is September 2022.

Cole said the new bridge will make things easier for a lot of people.