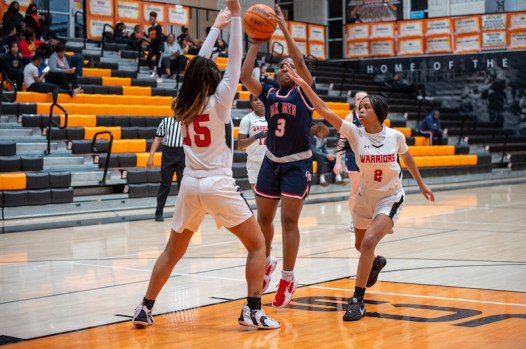 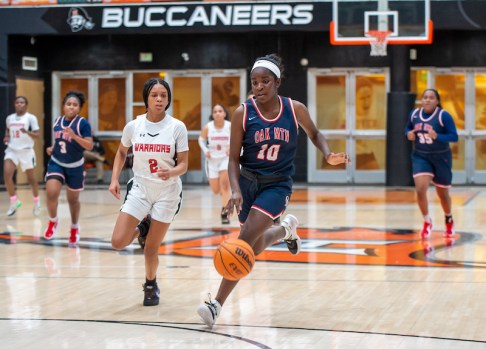 The Oak Mountain Eagles cemented a spot in the Sweet 16 for the third year in a row after taking down Thompson on Tuesday, Feb. 8. (For the Reporter/Larry Dancy) 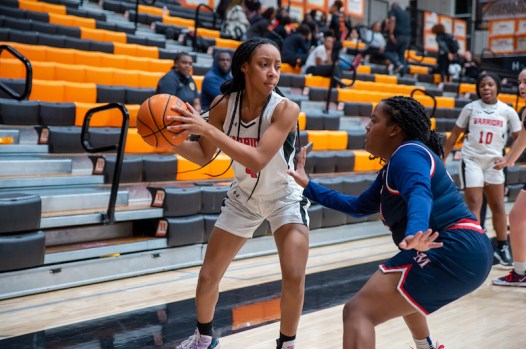 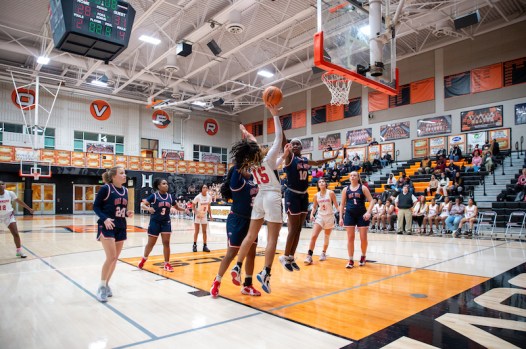 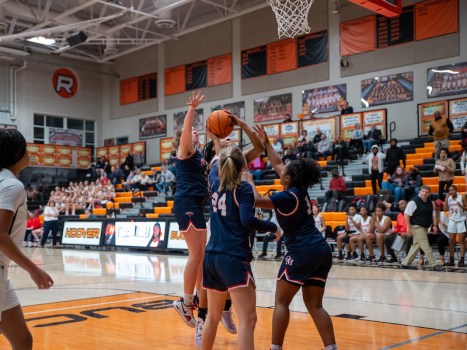 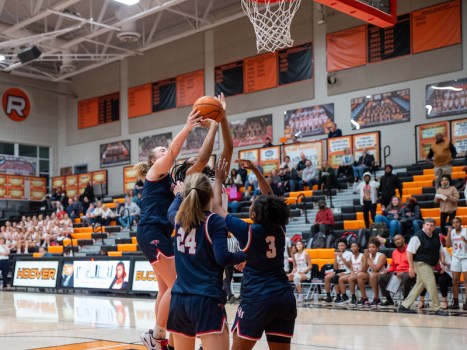 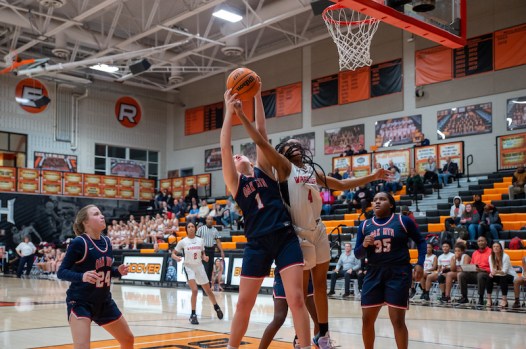 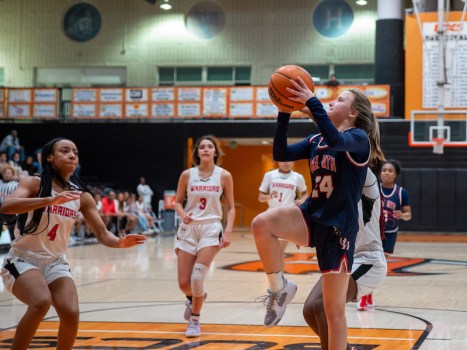 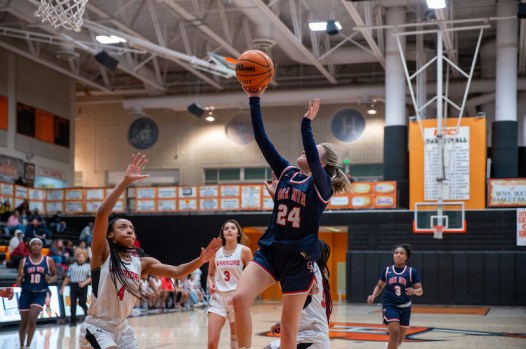 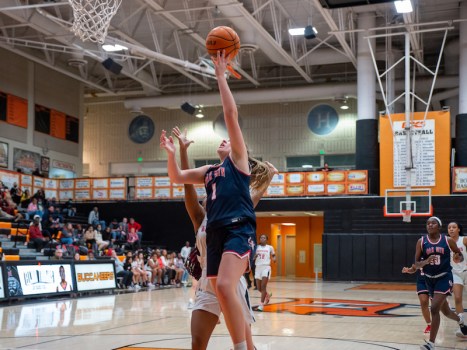 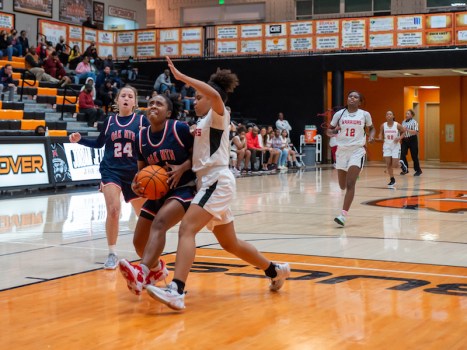 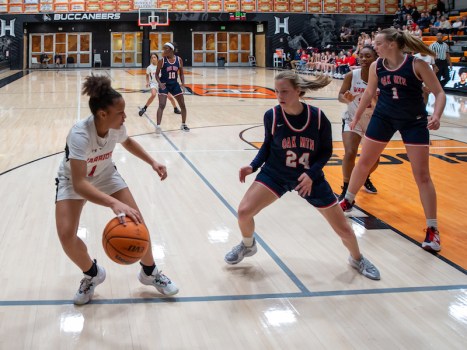 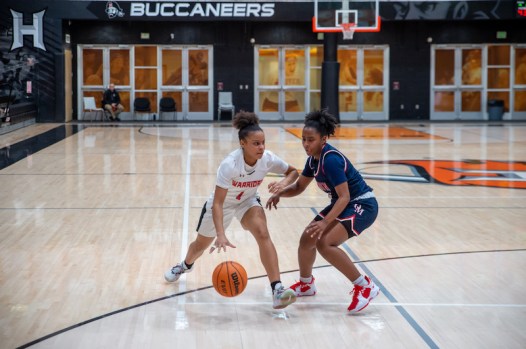 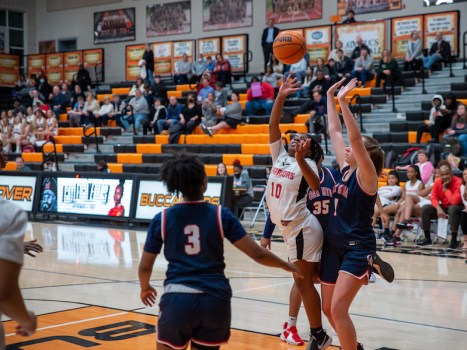 HOOVER – After another tough, up and down game against their area rival Thompson, the Oak Mountain Eagles clinched a spot in the Sweet 16 for the third consecutive year.

The Warriors made a big run after halftime to put the end result in doubt, but the Eagles finished with a flourish to extend their season with a 56-45 win on Tuesday, Feb. 8.

“We could’ve let the wheels fall off, but I told that group in the locker room that I was so proud of them,” said Oak Mountain head coach Beth Parmer. “They turned it around and that just says so much about them and how much they want it.”

The Eagles and Warriors have played close games this year as well as the last two years for a trip to the Sweet 16, and this matchup was no different.

The two squads battled through the first quarter to a 12-11 result heading into the second.

Raegan Whitaker was huge all night for Oak Mountain and hit two baskets, while Vica Hood came off the bench with four big points with the rest of the team struggling to find their shot.

Dasia Huynh scored six for the Warriors in the opening period and Zyon Gaiters scored five, including a 3-pointer.

Gaiters, who has been hampered this season with injuries, landed awkwardly and limped to the bench in the second quarter and did not return for the rest of the game.

Oak Mountain snatched the momentum in the second period, forcing nine turnovers, grabbing timely offensive rebounds and getting to the free throw line.

The Warriors wouldn’t score again until 4:28 left in the half as Charity Shaw’s first four points gave the Eagles a 23-15 lead.

After the Warriors closed the deficit to 24-19 at halftime, Oak Mountain surged again, taking a 30-21 lead off two Whitaker free throws.

However, Marty Smith’s group didn’t give up.

Charity Shaw’s rebounding came up big again as she nabbed a second chance off a miss and scored to give the Eagles the lead back before the horn sounded.

“She’s probably the hardest worker on our team,” Parmer said of Shaw. “She follows the ball well and goes after it so hard. It was so key, she stepped up and Charity played a really good game.”

Fouls had begun to pile up on Oak Mountain and starter Abby Gordon had to sit with her fourth personal, but the Eagles mounted a run that ultimately decided the game in the fourth.

Whitaker was unstoppable as she took over the game scoring eight points in a 16-2 run for the Eagles.

Now with a 51-38 lead, Oak Mountain was firmly in control.

“She always has the green light. You know sometimes we have to reign her in, but she’s been shooting the lights out these last two games,” Parmer said. “We thought they might isolate her to shut her down so I told them we all have to be involved and it can’t just be one or two people.”

Whitaker finished with 26 points to lead all scorers, while Shaw added 15 more.

Hood also contributed seven points in the win. Thompson was led by Maliyah Green who scored 10 points. Leading scorer Alecia Reasor scored eight, but played with a cast on her wrist during the game.

Oak Mountain will take on Hoover for the Area 5 championship Thursday, Feb. 10 at 6 p.m.