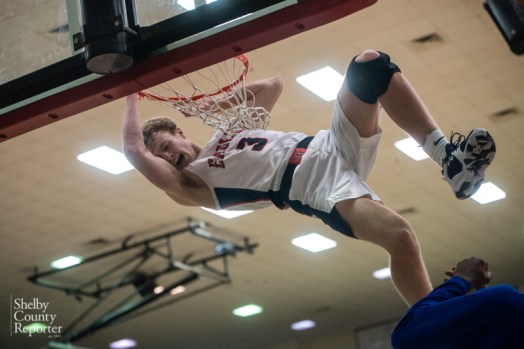 Oak Mountain’s Brady Dunn scored 14 points to help the Eagles pick up a hard-fought win in the opening round of the area tournament on Feb. 9. (Reporter photo/Keith McCoy) 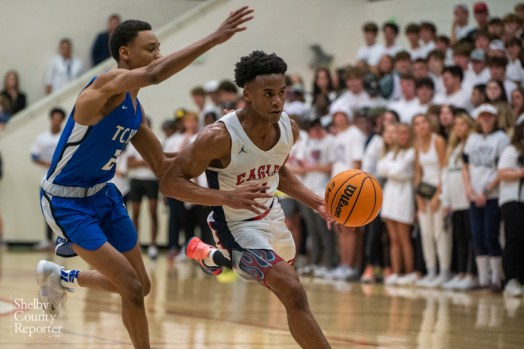 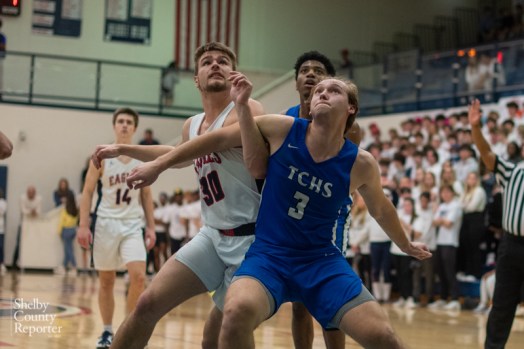 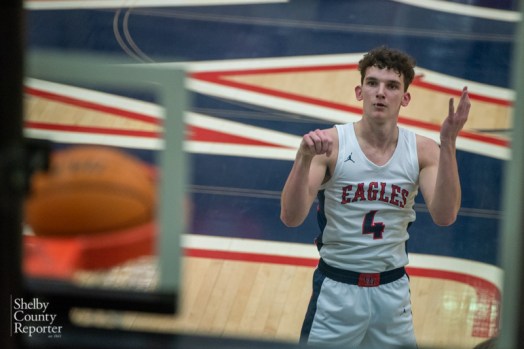 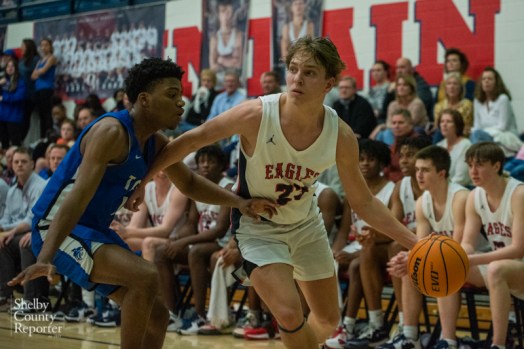 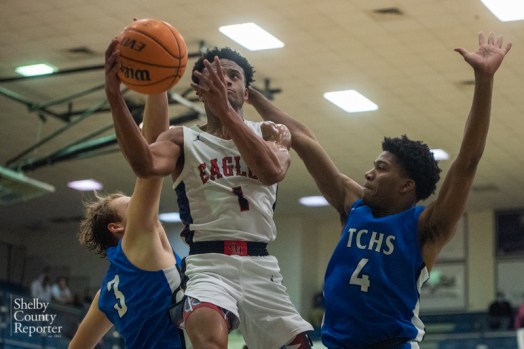 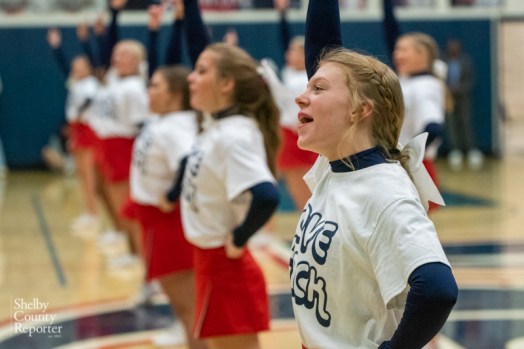 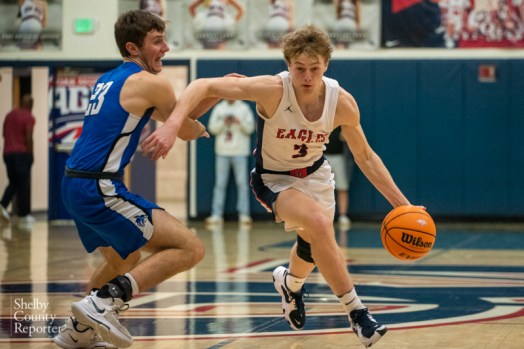 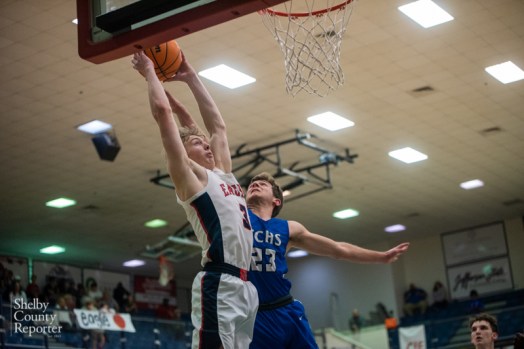 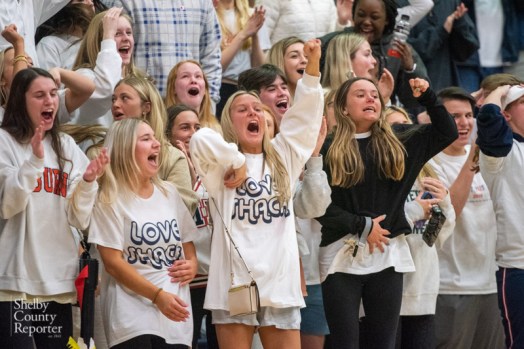 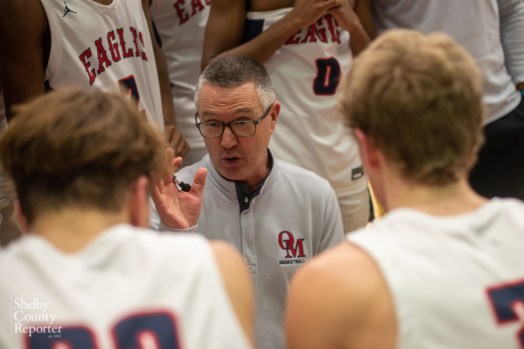 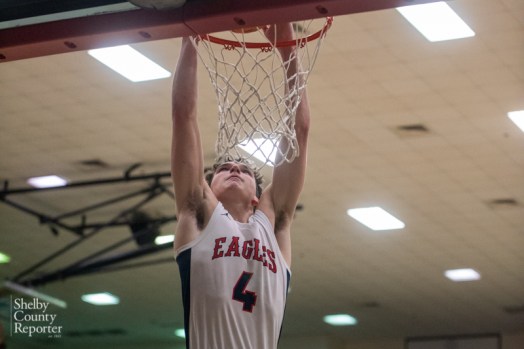 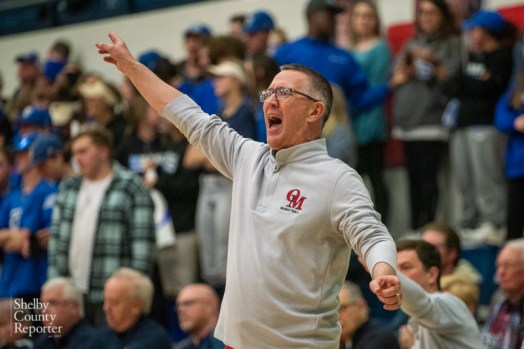 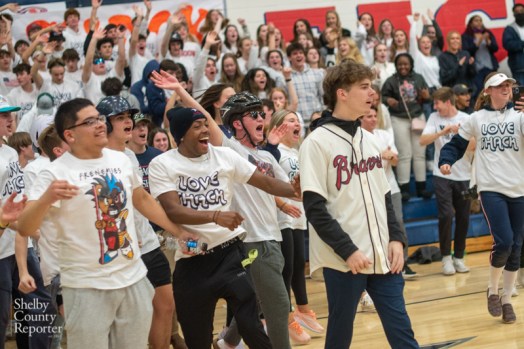 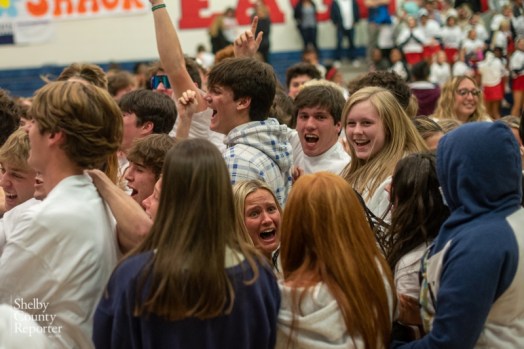 NORTH SHELBY – The path to a third consecutive Final Four and repeating as Class 7A State Champions began for the Oak Mountain Eagles on Wednesday, Feb. 9, and it began with a tough test.

Taking on a scrappy Tuscaloosa County team in the opening round of the area tournament with the season on the line, the Eagles led throughout, but the Wildcats hung around until the final minute.

It was a continued theme from the regular season for the two teams, with Oak Mountain winning the first between the two 54-52 and Tuscaloosa County winning the second game 59-52 for one of the Eagles’ five losses on the season.

This time around, however, Oak Mountain was healthier and wasn’t going to be denied.

After leading by as many as 12 points in the third quarter, the Eagles were forced to hang on late, but the game never got closer than four points with 1:11 left, as the Eagles made three free throws from there to cement a 46-41 victory.

With the win, Oak Mountain advanced to the Sweet 16, putting the Eagles two wins from another trip to the Final Four.

The Eagles soared out of the gate in the opening quarter behind a 7-0 run that featured a big dunk from Wilder Evers and a 3-pointer from Brady Dunn.

After that scorching-hot start in the first minute of the game, Oak Mountain went almost six minutes without scoring again, while Tuscaloosa County could never find a rhythm.

The Eagles, however, did get one free throw from Evan Smith and then ended the quarter with another 3-pointer from Dunn to take a 12-4 lead.

Tuscaloosa County, facing some early adversity with the season on the line, bounced back in the second quarter, which trimmed Oak Mountain’s lead down to four points at 22-18 with a minute left in the half.

The Eagles, however, added a layup from Evers with 40 seconds left in the half and then got a defensive stop to take a 24-18 lead into the half.

Oak Mountain quickly regained the momentum early in the second half behind a flawless defensive effort in the third quarter.

The Eagles gave up just three points in the period, which helped in a low-scoring game.

Oak Mountain’s offense didn’t have a huge quarter, but didn’t need one. A nine-point period was enough to give the Eagles their largest lead of the game at 33-21 heading to the final quarter.

The Wildcats handled the pressure and responded with a big answer to start the final quarter with a quick 5-0 run in the first 1:30 of the period.

Dunn, however, then had a big stretch.

He got an easy layup for Oak Mountain’s first basket of the period, then, after a three from Tuscaloosa County, he threw down a monster two-handed dunk that brought the house down.

That put Oak Mountain back in front by eight points with momentum.

Tuscaloosa County, however, continued to fight. Over the next two minutes, the Wildcats clawed to within four points at 43-39 with 1:11 to play in the game.

But Smith then hit two clutch free throws, followed shortly after by one from Ryan Giegel, as the uphill climb for Tuscaloosa County became too much to overcome.

Dunn led Oak Mountain with 14 points, while Evers and Smith had 12 and 11, respectively.

Before the Sweet 16, Oak Mountain will battle Thompson for the area championship on Friday night to determine seeding for the regional tournament.