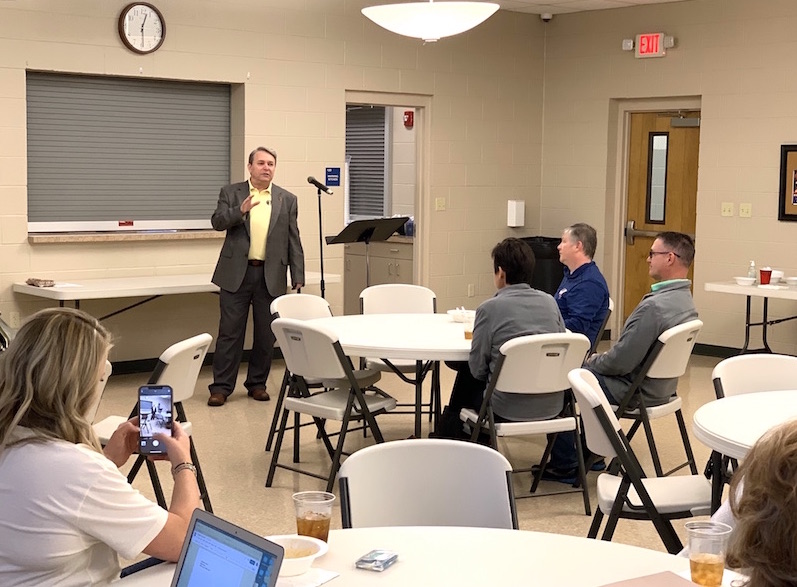 CHELSEA – Members of the Chelsea Business Alliance listened to an update on Shelby County projects from a longtime county official and Chelsea business owner on Wednesday, Feb. 2.

Shelby County Commissioner Robbie Hayes, who owns Hayes Eye Center, provided an overview of recently completed and ongoing projects in which the county is involved.

Hayes started his presentation with an overview of the Alex A. Dudchock Shelby County Services Building, the county’s new facility that opened on U.S. 280 in November.

“This has been a blessing already,” Hayes said, noting the building houses a county license office, an Alabama Law Enforcement Agency office, Westover’s water services office, Shelby County 911, a Shelby County Sheriff’s Office substation, Central Alabama Wellness and 58 INC. “This building is going to be a huge asset for this side of the county.”

Regarding parks and trail projects, Hayes talked about Double Oak Park, which the county is developing on a 750-acre parcel of land it purchased between Shelby County 43 and Shelby County 41, near the 280 corridor.

“It will be pretty impressive,” Hayes said of the park, where visitors will be able to walk, run, hike and bike along wide trails.

Dunnavant Valley Park, another new park the county is developing, will be located on 10 acres of property on Shelby County 41 at the old Mt Laurel Organic Garden site across from Dunnavant Place.

Other park projects the county has been involved with include the splash pad at Chelsea’s Melrose Park, the cross country trail at the city’s sports complex off Shelby County 11 and a walking trail in Vincent.

Regarding roads and bridges, Hayes said the realignment project at the 47-39 intersection in Chelsea is making progress, with a base layer of pavement going down and traffic light poles being installed.

Although a target completion date has not been announced, Hayes said the project will alleviate traffic issues in one of the city’s busiest areas.

“It will create a much better flow,” he added. “This is the city working with the county to make this happen, and I’m very thankful for the partnership.”

Hayes also discussed the waterline expansion on Shelby County 280, from Chelsea to Harpersville, a project the county was able to use American Rescue Plan funds on that will address ongoing growth in the area.

The county is also utilizing ARPA funds for a project to improve the P25 radio system by eliminating holes in coverage, ensuring Shelby County 911 and local law enforcement agencies do not encounter areas with no signal.

Bids for the project will be opened in late February, he said.

“It’s another resource in the county to have a lot of other events,” Hayes said. “I’m excited about that.”