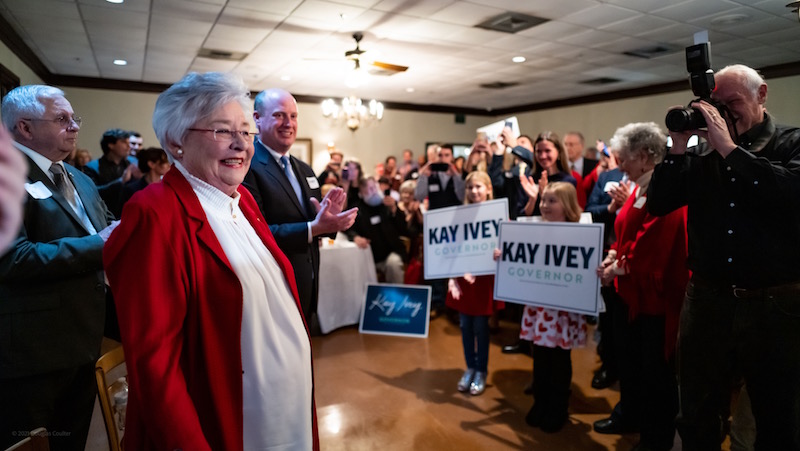 NORTH SHELBY – Alabama Gov. Kay Ivey spoke to a crowd of supporters as she kicked off her re-election campaign at Lloyd’s Restaurant on the night of Thursday, Feb. 10.

“I’m as proud as I can be to stand here before all of you and to kick off my campaign for re-election as governor of your great state,” Ivey said. “We’ve accomplished so much together to move our state forward, and the best is yet to come.”

Ivey said she is proud of her conservative record and work to bring more jobs to the state.

“We’ve created some 50,000 good paying jobs in Alabama,” Ivey said. “We’ve built the best business climate in the country, and we’ve delivered the lowest unemployment rate in Alabama history. Good paying jobs for Alabamians is my job, every single day.”

Ivey said she will continue to fight against the Biden Administration’s vaccine mandates, and added, “We did what we needed to do to make sure we stayed open during this awful pandemic and keep our kids in school where they belong.”

Other points Ivey noted were the banning of critical race theory and transgender sports in schools, along with signing what she called “the strongest pro-life law in the country.”

“I want to thank you all for your rock-solid support for the last five years, and more than anything, I want to thank you for your prayers, especially during difficult times,” Ivey said. “I’m asking all of you for your vote in the May primary election. Together, we’re going to keep Alabama working and bring even more great progress to our sweet home Alabama.”

The primary election will be held on Tuesday, May 24.