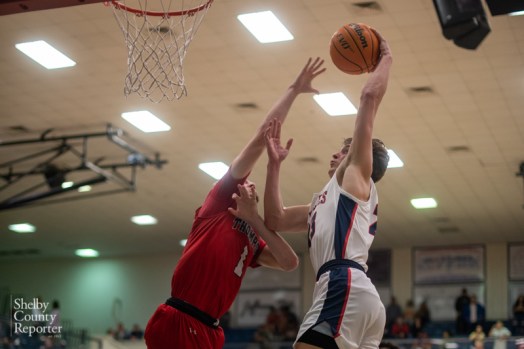 Matthew Heiberger goes up for a dunk that ended with an and-1 to help Oak Mountain seize control of the game and help the Eagles claim the area championship. (Reporter photo/Keith McCoy) 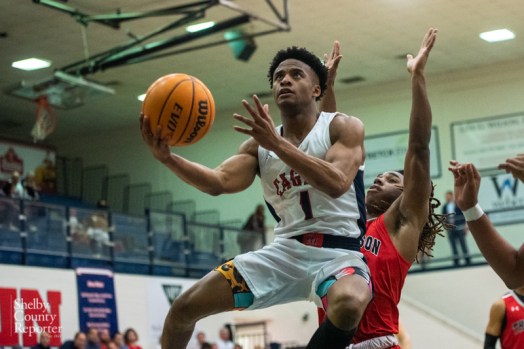 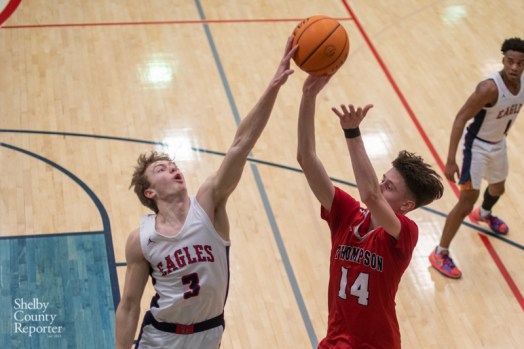 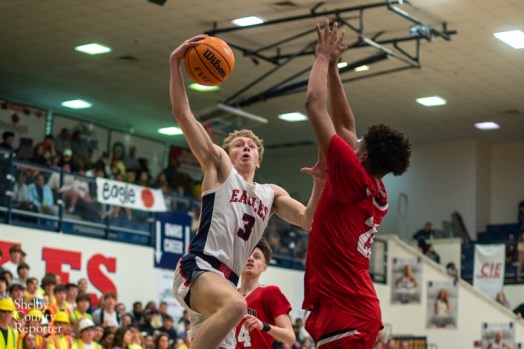 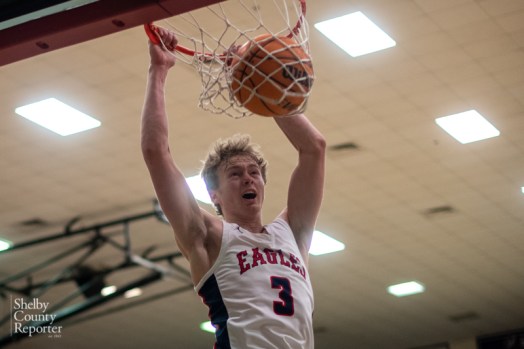 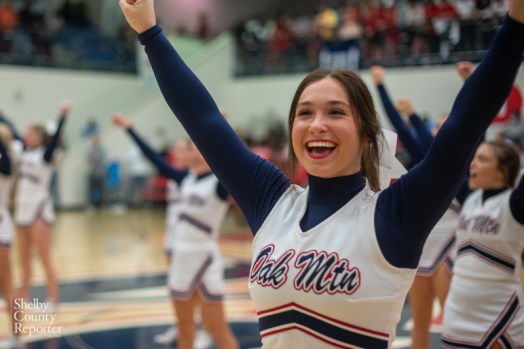 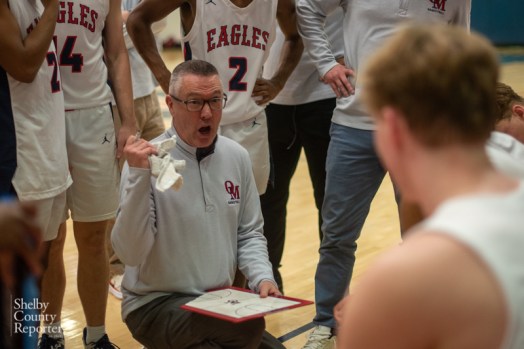 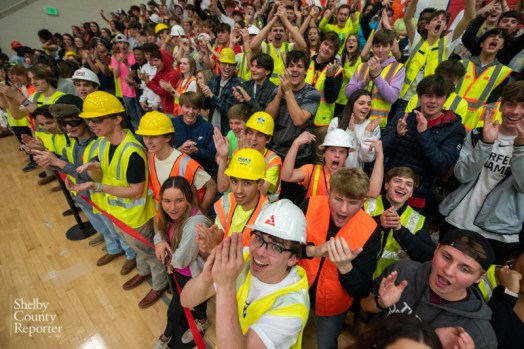 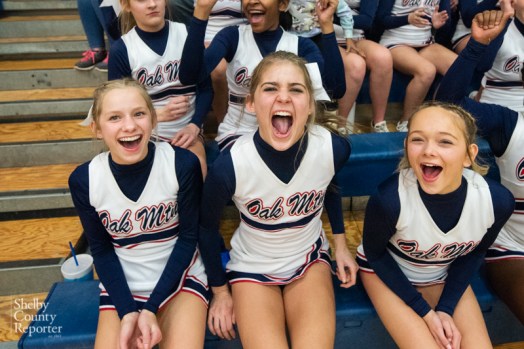 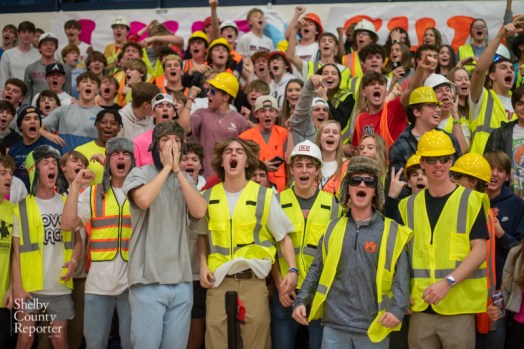 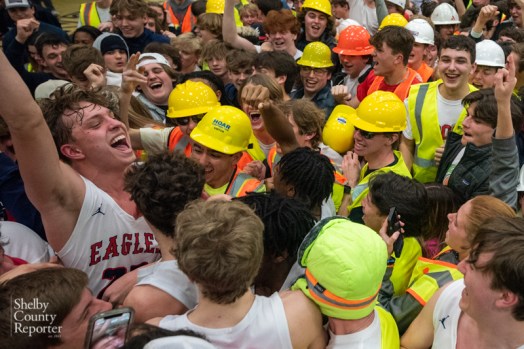 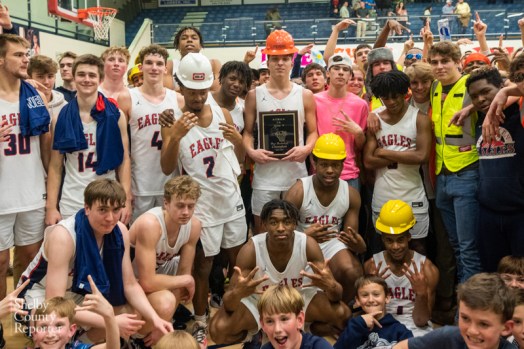 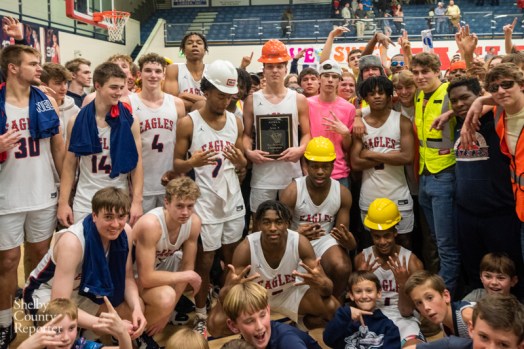 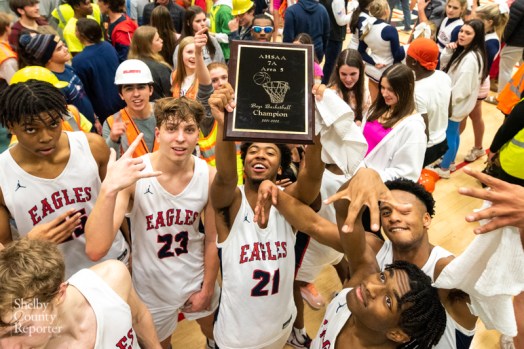 NORTH SHELBY – Looking to repeat as state champions this season, the Oak Mountain Eagles will enter the postseason with something they didn’t a season ago—an area championship.

The Eagles overcame a one-point deficit at the half against the Thompson Warriors on Friday, Feb. 11, by outscoring the Warriors 40-29 in the second half to grab a 66-56 victory in the title game.

With that, Oak Mountain enters the Sweet 16 with the area championship for the second time in three years after missing out on the title a year ago.

The matchup was a thrilling back-and-forth battle between the two teams in the first half, with each trading runs in their third matchup against each other this season.

The Warriors entered fresh off a momentum-boosting win against Hoover and were motivated after clinching a Sweet-16 berth themselves, which led to a 15-14 lead at the end of the opening quarter.

That was followed by a quick 8-0 run to start the second quarter after a put back and back-to-back threes from Jose Gonzalez.

Thompson then went back up by four, but a late 3-pointer from Brady Dunn helped Oak Mountain claw back to within a point in a 27-26 lead for Thompson at the half.

Dunn then followed that up with the first basket of the second half on another three to put Oak Mountain in front 29-27.

Thompson drew back within six points with two Justin McKnight free throws and another three from Gonzalez, but the Eagles extended the lead to their largest of the game with a 4-0 run to end the quarter.

The Eagles then carried that into the third quarter with a quick 7-0 run that included a poster dunk from Matthew Heiberger, who threw the ball into the basket emphatically to put Oak Mountain on top 53-36.

From there, Thompson had to start fouling with close to four minutes to play, but despite some inconsistencies at the line from Oak Mountain, the deficit was too large for the Warriors.

They got as close as nine points with about a minute left, but no closer the rest of the way.

Oak Mountain was led by Dunn with 23 points in the win, while Heiberger and Wilder Evers added 13 and 12, respectively.

Thompson got 13 each from Roberson and Gonzalez in the loss.