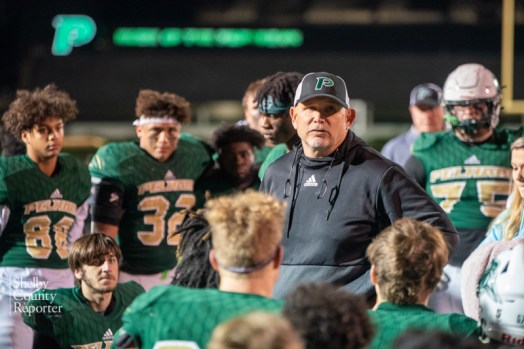 PELHAM – A historic 22-year career as a head football coach in Alabama has come to an end for Pelham’s Tom Causey.

The head coach of the Panthers for the past seven seasons and a head coach in the state of Alabama since 2000 at four different schools broke the news to his team on Friday morning, Feb. 11.

“This was an extremely tough decision for us to make. It was made with much thought, prayer and consideration,” Causey said. “Because of the players, parents and Pelham community it was a hard decision. There is no way that we could have accomplished so much without your help and support.”

Causey does plan to retire from education in Alabama and pursue an opportunity in Georgia.

“Coach Causey’s dedication to our student athletes and his commitment to our school community has been second to none,” said Pelham Principal and Athletic Director Kim Kiel. “Under his leadership, the culture of Pelham football has developed into a competitive program and has achieved much and received many accolades. He will be greatly missed, and I wish nothing but the absolute best for the Causey family.”

During his 22-year career leading Pelham, Demopolis, Andalusia and Dallas County, Causey finished with an overall record of 159-121, including a 13-17 record in the playoffs after leading 18 of his 22 teams to the postseason.

In his time at Pelham alone, he helped take the Panthers to the playoffs four times in the last five years, including the last two years in a row. He also led the Panthers to their first region title since 2006 during the 2020 season and just their third in school history following an 8-3 record.

He went 33-41 as Pelham’s head coach, including two 7-4 seasons and one 8-3 season during the last four years as he built the program and tried to change the culture.

In addition to winning games and trying to turn the program around, Causey said his main goal each year was to build a culture where the players were proud of their school and community. Causey said he cherished when former players came back to support the team, and sustaining that was big in building the program.

At his other stops, Causey went 22-12 in three seasons at Dallas County, 24-22 in four seasons at Andalusia and 67-29 in eight seasons at Demopolis.

His playoff records were 1-3 at Dallas County, 3-3 at Andalusia and 9-7 at Demopolis.

He also finishes out his career with one state championship, leading the 2009 Demopolis team to a 12-3 record and the Class 5A title, while he also took Andalusia to the Class 4A semifinals in 2006.

Pelham City Schools has now begun the process of finding its next head football coach.