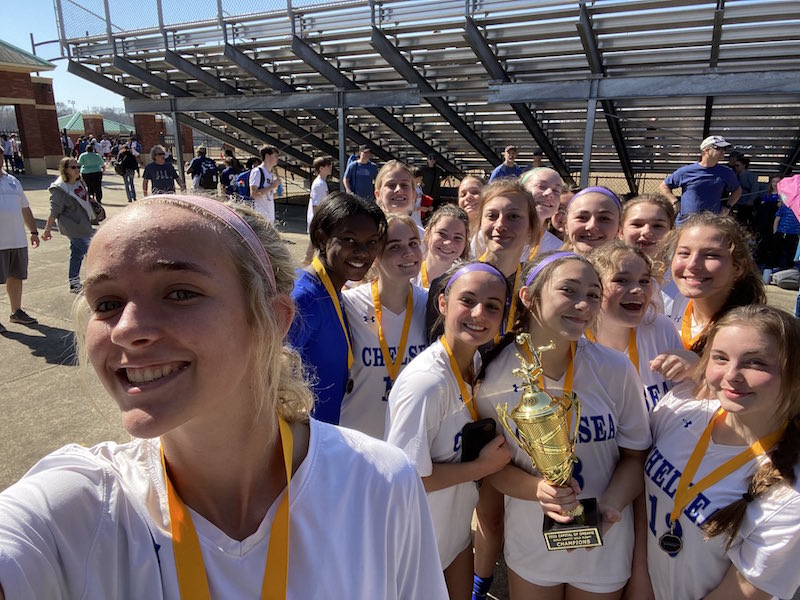 Chelsea's girls soccer team carries holds up the trophy after winning the Capital of Dreams tournament in Montgomery. (Contributed)

MONTGOMERY – Following a season-opening loss to Class 7A No. 1 Oak Mountain by five goals, the Chelsea Hornets have responded in a big way, including with their first tournament win of the young season.

Competing in the Capital of Dreams tournament in Montgomery Feb. 11-12, the Hornets continued a four-match win streak with three consecutive wins in two days to bring home the Gold Division Championship.

The Hornets used two shutouts and a combined score of 6-1 to pick up the three wins and claim the title in their first tournament appearance of the season.

Chelsea started with a bang against Montgomery Catholic in the first of two games on Friday, Feb. 11.

The Hornets took advantage of fresh legs early in the game, which led to two quick goals out of the gate in the opening half.

From there, Chelsea relied on a defense that had found its groove a few days earlier in a 1-0 shutout against Hewitt-Trussville.

That helped the Hornets post a second shutout in a row in a 2-0 victory against Montgomery Catholic.

That gave them a confidence boost heading into a matchup with Pike Road shortly after in their second of back-to-back matches.

Chelsea continued capitalizing on a speedy and physical approach defensively, which allowed the offense to buy time in a slow start.

With that, the Hornets were able to make some changes offensively following a scoreless first half, which ultimately led to the game-winning goal in the second half of a 1-0 victory.

That led into the final day of the tournament on Saturday, Feb. 12, which pitted Chelsea against Enterprise.

With the winner set to win the championship after both started 2-0, Chelsea came out with a focused effort.

The Hornets not only used another solid defensive effort to help grab the victory, but the offense played its best game of the season in a 3-1 win.

With the championship, Chelsea extended its win streak to four in a row and has now given up one combined goal during that four-match stretch.