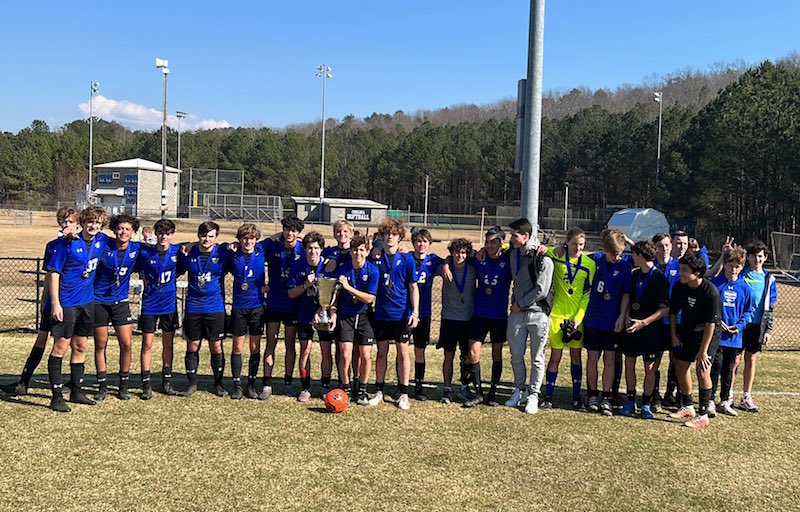 In the inaugural Melrose Cup hosted by Chelsea High School, the Hornets hosted defended their home turf in a tournament featuring Leeds, Helena and Pinson Valley.

Competing over three days, each of the teams played one another between Feb. 10 and 12, but the Hornets were the only ones to finish undefeated, giving them the inaugural championship.

The three consecutive wins helped Chelsea continue an impressive start to the 2022 season with a 5-0-1 record following back-to-back tournaments in the first two weekends.

The Hornets performed well at the Lakeshore Shootout the weekend before, with the lone blemish a 0-0 tie against Hewitt-Trussville, but this time around, they left no doubt in three consecutive wins.

The toughest test of the tournament for the Hornets came in the opener against Leeds.

Following a quiet first half that saw the two teams enter the break scoreless, Chelsea finally found an opportunity very quickly in the second half win Andrew Teixeira got the ball from the keeper and buried it in the back of the net for a 1-0 lead.

The Hornets continued to control the ball much of the half, and while they couldn’t convert another goal, they prevented Leeds from ever finding the goal in a 1-0 shutout victory to start the tournament.

That led into a rivalry battle a day later against Helena.

The matchup was another low-scoring one early, but Chelsea was able to grab a 1-0 lead at the break this time around after Alejandro Hernandez headed a shot into the net early in the game.

That became the halftime score, but Helena didn’t go down quietly.

The Huskies made some adjustments at the break, which led to the equalizer early in the second half.

Chelsea, however, responded almost immediately when Kaleb Bass intercepted a pass and pushed ahead to Teixeira for the goal and a 2-1 lead.

The Hornets added one more shortly after before Luke Miller nailed a free kick to give the Hornets three unanswered goals in a 4-1 victory.

That set up a matchup with Pinson Valley on championship day, which proved to be a challenge.

A little more than 10 minutes into the game, the Hornets were able to strike first after Hernandez drew a penalty inside the box. That led to a penalty kick from Bass, who drilled a shot into the left side of the net for a 1-0 advantage.

Pinson, however, turned up the defensive pressure and eventually found an equalizer following a slow stretch of play from both teams.

But early in the second half, almost identical to the fast start from Chelsea, the Hornets got the go-ahead goal within the first 15 minutes of the half when Bass crossed to Miller, who drilled a shot into the back of the net for a 2-1 lead.

Chelsea got more good looks down the stretch, and similar to the opener against Leeds, prevented many opportunities from Pinson down the stretch to preserve the win and championship.

Following the tournament, the Hornets are now 5-0-1 and have now outscored opponents by a combined 11-3.

In addition to the 4-1 loss to Chelsea, Helena also put together an impressive showing at the tournament, especially from the defense.

The Huskies opened the tournament with a 2-0 shutout against Pinson Valley, while they ended with a 0-0 tie against Leeds.

In the 2-0 victory, Helena got goals from James Solorio and Cade Shannon, while Grant Gurganus picked up two shutouts in goal.

The Huskies were 2-2-1 following the event.