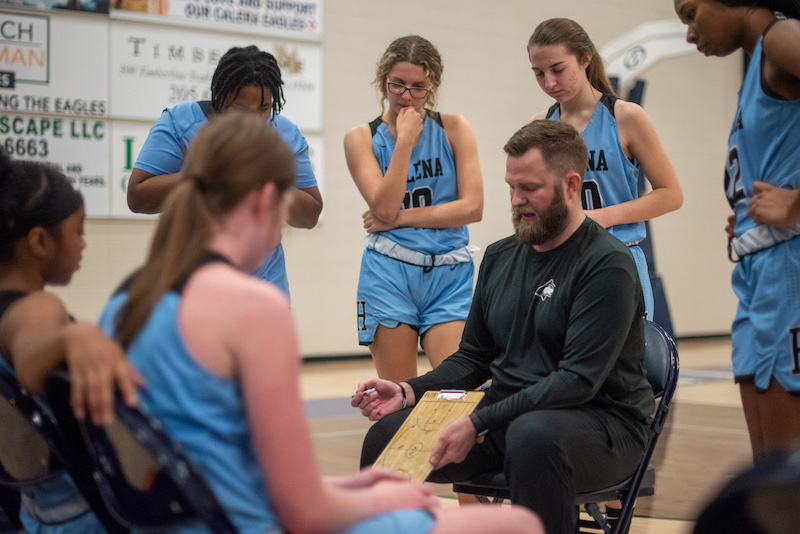 Helena’s girls basketball team advanced to the Sweet 16 for the first time in four years after a road win against Stanhope Elmore on Feb. 14. (File)

MILLBROOK – After losing 54-48 to Wetumpka in the sub-regional round of the playoffs a season ago, Helena girls basketball head coach Alan Skinner saw something different in the eyes of his players.

He saw a group of players hurt and made about small mistakes costing the Huskies a shot at the Sweet 16, which became the focus of the offseason.

The Huskies put an emphasis on focus and avoiding small mistakes throughout the 2021-2022 season, which led them back to the sub-regionals on Tuesday, Feb. 14.

Taking on Stanhope Elmore looking to put their past mistakes behind them, the Huskies did exactly what they had practiced so hard at throughout the season, putting together an ideal performance to take down Mustangs 57-45.

Helena scored 15 points or more in each of the final three quarters and limited Stanhope Elmore to 13 or less in every quarter of the game to slowly pull away for the 12-point win and punch a ticket to the Sweet 16 for the first time since the 2017-18 season.

It took a while for the Huskies to pull away, however, as the first half was tightly contested between the two with the season on the line.

The lead changed hands six times in the first quarter before a late free throw from the Mustangs evened the game at 11-11 going to the second quarter of play.

That trend continued into the second quarter, as the lead changed hands three more times, but the Huskies found themselves chasing from behind much of the quarter.

The Mustangs led by as many as three up to 20-17, but the Huskies stormed back to regain the lead.

They used an 8-2 lead to go in front by five, before the two teams traded baskets again with a Kennedi Nobles shot before the half giving Helena a 27-24 lead at the break.

Stanhope came out and grabbed the lead quickly to start the second half, as it looked like the back-and-forth trend was set to continue.

Helena bounced right back after falling down 28-27, but this time, the lead didn’t change hands again.

The Huskies got five straight points from Sophia Merchant, a free throw from Alana Scott and a 3-pointer from Olivia Johnigan to take a 38-31 advantage.

That was part of a 15-9 quarter for Helena, as the Huskies took a 42-33 lead into the final quarter of play.

It became just a small portion of a dominant stretch that changed the game, as the Huskies carried that into the final quarter. Helena started the fourth quarter on a 7-0 run to take a 16-point lead.

Stanhope got no closer than eight points the rest of the way, as Helena made six free throws over the final 1:30 to cement the win.

Johnigan led Helena with 18 points, while Jaterrica Moody and Nobles both finished in double figures with 11 and 10 points, respectively. Merchant finished just behind with nine points.

The Huskies will now take on McGill-Toolen Thursday at noon in Montgomery.