Pelham takes down No. 1 and No. 2 at Southern Shootout 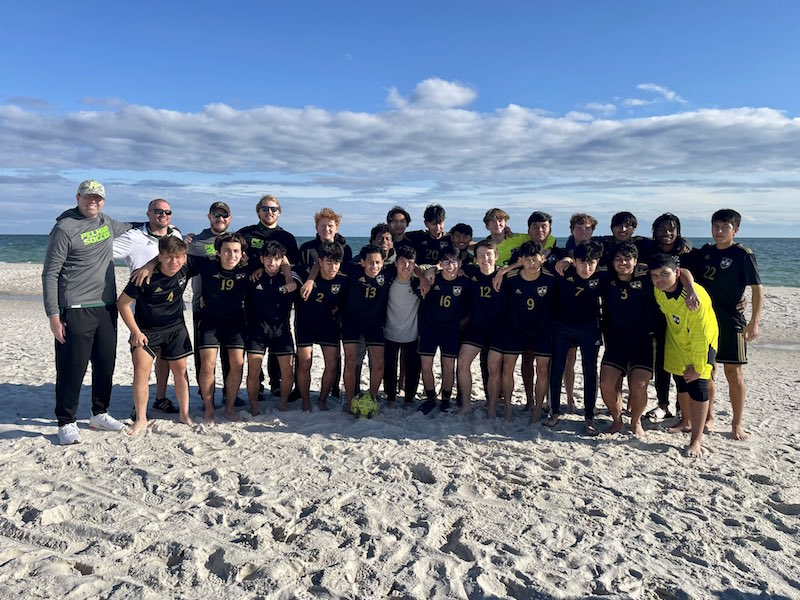 Pelham’s trip to the beach for the Southern Shootout ended with wins against the No. 1 and No. 2 teams in the 6A classification. (Contributed)

FOLEY – Two wins from the Pelham boys soccer team overshadowed one loss at the 2022 Southern Shootout tournament in Foley Feb. 11-12.

The Panthers, who have been one of the busiest teams through the first week of the season, entered the event 2-2 on the season with two one-goal losses to 6A No. 3 Homewood and No. 5 Chelsea. They also had wins of 3-1 against Cullman and 4-0 against Wetumpka.

Their two biggest wins of the young season, however, came during the Shootout against the top two teams in the 6A classification.

In the opening game of the tournament, the Panthers took on No. 2 McGill-Toolen and were able to squeak out a tightly-contested victory.

Taking on the second-ranked Yellow Jackets, Pelham gave up one goal, marking the fifth consecutive game to start the season with one goal or less, while the offense did just enough on the attack to tally two goals in the one-goal victory.

Six hours later, the Panthers were forced to play their second game in one day against Class 7A No. 10 Auburn, but the tired legs were too much to overcome with Auburn having a day of rest between their first and second game.

The Tigers capitalized and went on to win 5-0, handing Pelham the shutout loss.

The Panthers, however, didn’t stay down long for long, nor did they have the time to.

A day later, they were back on the pitch, and this time against top-ranked Mountain Brook.

Pelham bounced back from the loss in a big way against the No. 1 team, not only picking up a victory, but a shutout in a 2-0 win against the Spartans.

Pelham finished second to Auburn in the division after totaling six points, which finished one point behind the Tigers due to their head-to-head win over the Panthers.

Against one of the toughest early-season schedules in the state, the Panthers are now 4-3 overall following the victory and have outscored opponents 11-9 with five of those nine goals given up coming from Auburn.