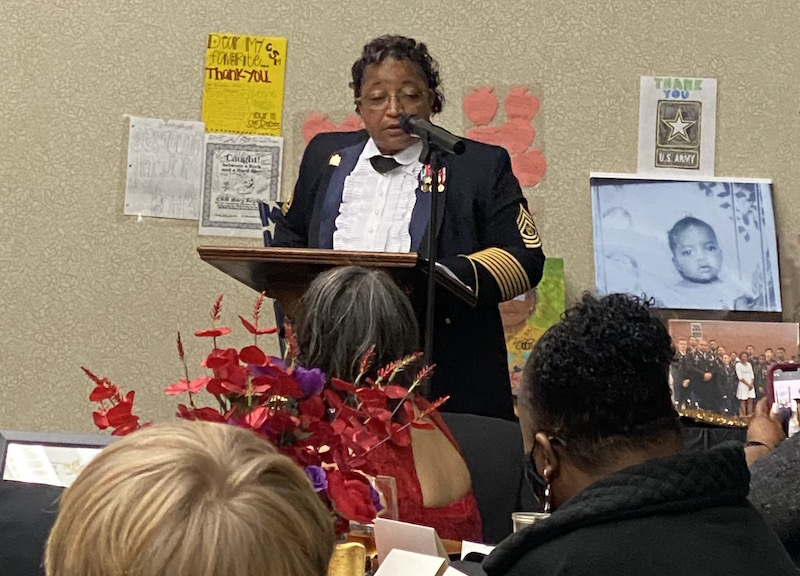 A special gala was recently held to celebrate the retirement of Mary Kyser from the U.S. Army and Vincent’s JROTC Program. (Contributed)

Her extraordinary service resulted in a public service commendation medal, awarded by the Secretary of the Army, for her dedication to the students and the JROTC program.  Her departure will surely leave a void, but her legacy will live on for years to come.

While her professional career is impressive with notable accomplishments and accolades, including being highly recognized as the first female to achieve the rank of Sergeant Major and Command Sergeant Major in the Ordinance Corps, it is the way she conducted her vast array of assignments that clearly leaves undeniable imprints on the hearts she impacted along the way.

Her retirement gala of approximately 170 guests included family and a cross-section of people representing all aspects of her life and professional journey.

There were former students, faculty, childhood friends, community friends, church friends and military friends in attendance, all of whom Kyser considers part of her family.

The pomp and circumstance did not disappoint, and the evening was executed like a well-practiced military drill.

She entered the room in full dress uniform, flanked by her brother and her son, and was handed a beautiful bouquet of roses.

The ceremony ended with the Military Medley, a tribute to her fellow military veterans.

The deviation from the standard retirement party emerged as the abundantly diverse group began to share their stories about Kyser. From her brother, son and granddaughter to fellow teachers, former bosses, former students and even a private that experienced her as a drill sergeant, we heard the words, “I love you.”

The evening was a vivid reveal of the true character of this somewhat intimidating woman who projects a no-nonsense demeanor and who commands respect yet walks in humility.

Her ability to lead and direct while encouraging and her servant philosophy, care for all, consistent with Matthew 25:40, was woven throughout every speech like a well-knitted blanket of comfort for the soul.

Pastor JR Finney opened the program in prayer, then made remarks about Kyser, a member of the congregation at Covenant Community Church.

Quoting Galatians 6:9, Finney unknowingly outlined the visual that would become etched in the memories of those in attendance.

“Let us not become weary in doing good, for at the proper time we will reap a harvest if we do not give up,” Finney said.

Oh, what a harvest the audience witnessed that evening. It is impossible to capture the magnitude of the outpouring of love that was expressed toward a woman who demanded discipline and respect of authority, while also sowing encouragement and influencing lives.

The common theme throughout the evening from speakers and those seated alike was, “Legacy, legend, love.”

Former students who traveled miles to attend, co-workers and bosses, and the platoon member under her command who became a general, then looked her up after 30 years, all echoed these statements, “She never asked for perfection, only that you were better than yesterday,” “She had faith in me that I did not have in myself,” “She taught me to diffuse situations with love,” and “She sets expectations, leads by example and celebrates your victories.”

Kyser’s professional and military accomplishments speak volumes about her tenacity, but her legacy speaks of her heart.

And the thousands of students impacted by this remarkable woman, they will always refer to her as “Mama Major.”