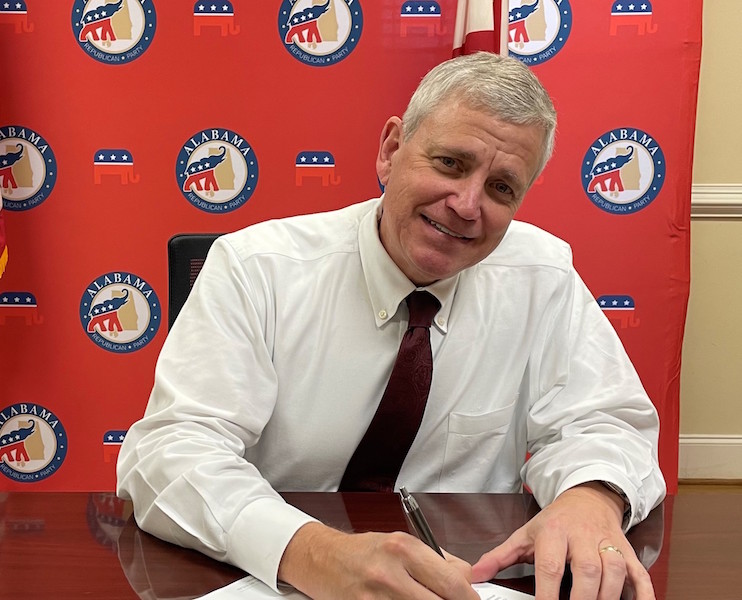 Jeff Brumlow has qualified to run for Circuit Court Judge in Shelby County after current Judge Corey Moore decided not to run for another term. (Contributed)

Brumlow originally announced his candidacy for the Republican Primary for District Judge of Shelby County, Place 1—a seat that was held by current Judge Jim Kramer.

That was before current Circuit Court Judge Corey Moore decided not to seek reelection.

“Judge Moore’s decision in late December that he would not seek another term left many of us who know him saddened,” Brumlow said. “Judge Moore is not only a good man and lawyer but also a conscientious judge who serves Shelby County well. Even before he took the bench, he was a friend and a mentor, not just to me but to numerous members of the bar and the community. He is leaving incredibly big shoes to fill and will be greatly missed on the bench. After prayerful consideration and conversations with my family, friends, and colleagues in Shelby County, I believe I can accomplish more for our county in the circuit court.”

He left that program to serve on the pastoral staff of churches in Georgia and Alabama before enrolling in Cumberland School of Law of Samford University in 1995. He has been a practicing member of the Alabama State Bar since 1998 and Florida State Bar since 1999.

During his 23 years as a state court trial lawyer and general counsel, Brumlow gained extensive trial experience in the municipal, district and circuit courts in both criminal and civil cases.

He also gained experience in the Alabama Supreme Court, Court of Civil Appeals and Court of Criminal Appeals. He has served as the prosecutor for the city of Alabaster since 2004 and as city attorney for the city since 2008.

During his tenure with Alabaster, he created adult pretrial diversion programs for its municipal court that became the model for numerous municipal courts in the Shelby and Jefferson county areas and were enacted as local law by the state legislature.

Additionally, he drafted legislation that would allow municipal courts access to specialty treatment programs in county courts such as mental health, drug court and veteran’s court.

“I’ve always had a heart for people,” Brumlow said. “My practice has sought to help people deal with their unique issues to avoid more serious problems in the future.”

To that end, nearly 10 years ago he started the Youthful Offender program, which requires testing, life coaching, education or job skills training, and monthly mentoring that has seen great success for dozens of youth charged with more serious misdemeanor offenses.

For more than 33 years, Brumlow has been married to Dr. Donna Brumlow—a career educator and child advocate. She is currently the assistant principal at Paine Elementary School in Trussville. The couple has two adult married children.

Since 2006, Brumlow has been an ordained ruling elder in the Presbyterian Church in America and an active participant in local missions in his church and international short-term missions through Mission to the World (MTW).

He and his wife currently attend Faith Presbyterian Church, PCA. A life-long Republican, he is also a member of the executive committee of the Shelby County Republican Party.

“Juvenile Court is uniquely important in that it is about shaping the future of our county one child at a time,” Brumlow said when asked why he was seeking the position. “I bring over two decades of legal experience and a life-long track record of making a difference in people’s lives and helping them through difficult periods. My life experience and law practice have prepared me to serve Shelby County well from day one.”

If elected, Brumlow seeks to increase the efficiency and expectancy of the court’s participants, whether parents, children, attorneys or court personnel.

For more information about the campaign, visit Votebrumlow.com or find the” Vote Brumlow” campaign on Facebook and Instagram.