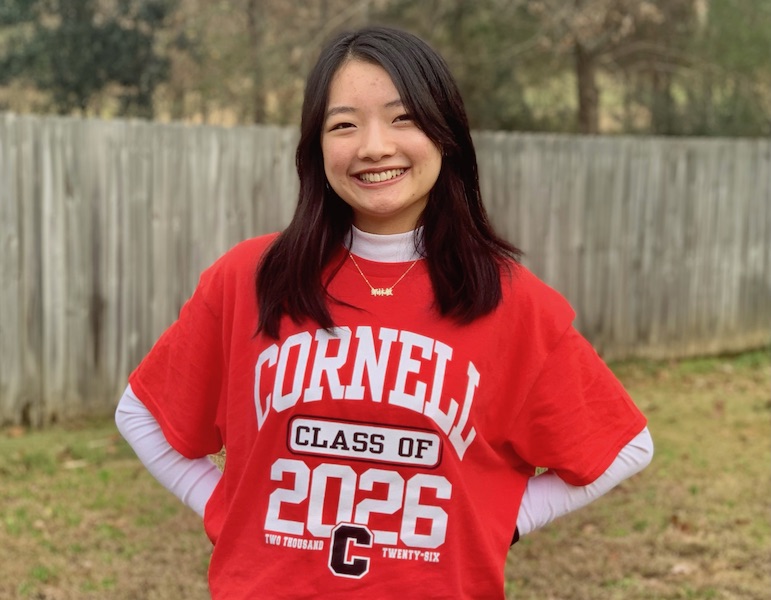 HELENA – Sharon Zou sits in her family’s restaurant, Helena’s Zou’s Kitchen, wearing a Cornell University shirt. The shirt is more than fitting given that following her graduation from Helena High School in the spring, Zou will be attending the prestigious university.

Waiting to see if she got into Cornell was unknown territory for Zou as she said she didn’t know what to expect.

“I took a shower to calm myself down because I was like really nervous, and my parents just put the camera down and we opened [the letter],” she said. “I wasn’t really expecting much, like I expected to cry if I didn’t get in, but I got in and I ended up crying anyway.”

Zou has lived in Helena since she was 4 years old, and she said she’s looking forward to seeing the differences in New York and Helena.

When she isn’t spending time with her friends or her cat Tiger, she loves to read Young Adult novels and is part of the Helena Teen Council. While some may show more reservations towards moving so far away from home, Zou said she is excited to branch out from what she knows and see what the world has to offer her. She’s also excited to be closer to her grandparents, who live in New York.

“It’s a four hour trip from Ithaca to New York, but that’s a lot shorter than the trip from here,” she said.

Cornell has an acceptance rate of 10.7% as of 2020, which only adds to Zou’s impressive accomplishment. Zou said she’s excited to experience the diverse community Cornell has to offer, and she feels like her experiences at Helena High School have prepared her for this new type of environment.

“I feel like it’s going to be more hardcore, but I’m really excited experiencing something different,” she said.

Zou has carved a special spot out for herself in Helena. She said the things she’ll miss most will be her friends and her teachers. She loves the tight-knit feel of Helena, and said it will definitely be a jump going to Ithaca, New York. Her favorite teacher at HHS is her math teacher, Miss Elliot, who Zou said helped change her perspective on a subject she normally despises.

“I normally hate math but I like her,” she said.

While she said she will of course miss her family, Zou said they have been very excited and supportive of her.

Zou will head to Cornell for the fall 2022 semester, and she has diverse interests in her area of study. She’s looking into government studies and computer sciences, where she said she would enjoy a job with Google or Spotify in computer programming. She said she also wants to better acquaint herself with Mandarin and possibly go into immigration or civil law to help people.

As for summer plans, Zou has further plans of exploring unfamiliar territory.

“Me and my friends are going to do an Alabama bucket list thing where we go see and do the things around Alabama that we’ve never seen before,” she said. “I’m really looking forward to that.”