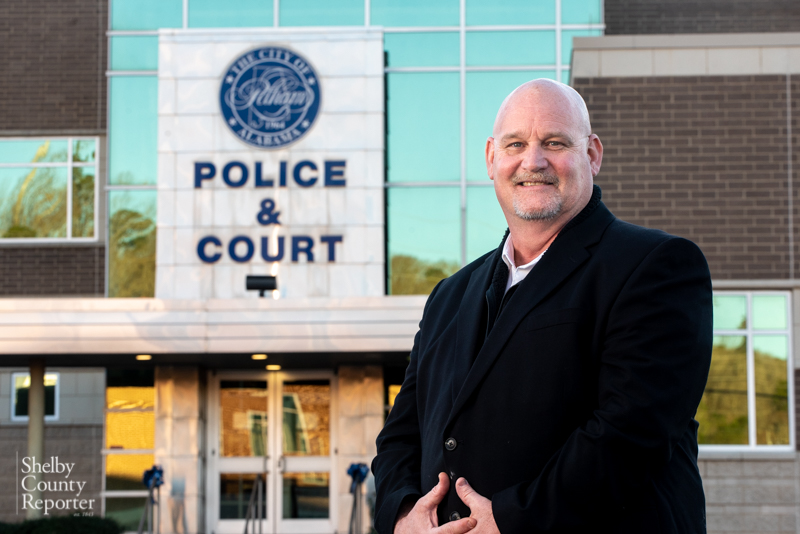 Officer David Tkacik has officially retired from the Pelham Police Department where he served for 32 years and two months serving and forming bonds with the community. (Reporter Photo/Keith McCoy)

PELHAM – On Wednesday, Jan. 26, Pelham’s Officer David Tkacik signed off for the last time with the Pelham Police Department.

“016, congratulations on your 32 years of service,” said the voice on the other end of the radio call. “Thank you for all you’ve done for our department and for our city. We wish you well in your future endeavors.”

The department streamed the sign off on social media, and Tkacik said he experienced many emotions in that moment. On how he made the decision to retire, Tkacik said he just felt it was time.

“I just felt it was time for me to close this chapter and open up a new one,” he said.

Tkacik spent 32 years and two months on the force, devoting almost half his life to serving and protecting the community he loves so much. He said he realized he wanted to be a police officer at a young age due to his love of classic cop shows like Baretta.

“I liked what I saw and knew that’s what I wanted to do,” he said.

He became a reserve officer in Shelby County in 1987, and he went on to do security work in downtown Birmingham. He took the police officer exam and was signed in to be an officer in  April 1989. He applied to the Pelham Police Department shortly after and the rest is history.

In his 32 years on the force, he said he’s seen the significant changes throughout Pelham and Shelby County.

“The main thing is the businesses and homes that came here in that period of time,” Tkacik said. “Pelham just grew and it just got better and better.”

One thing that remained constant, however, is the strength of the bonds throughout the community. Tkacik said he has always felt loved and supported by the Pelham community, and that makes his job a lot more enjoyable.

“The community itself grew closer and closer as time went on, and that closeness makes it a wonderful place to work,” he said. “The citizens want to get to know us and we want to get to know the citizens, and it can be anything from our National Night Out to driving down the street and talking to the people sitting in their yard or walking their dogs, sometimes just a ‘hello’ makes everything worth it.”

Tkacik has also lived through the various ups and downs in how police officers are viewed in the public eye, and he emphasized how receiving support from the Shelby County community all these years has truly touched him in his work.

“It makes us want to work better,” he said. “We see that outpouring of love from the community and it makes it worth coming to work and getting to know them and assuring them that they have a great place to live and start a business and thrive.”

Tkacik said he has seen almost everything in his time on the force. His head is filled with good memories and some memories he wishes he could forget. Working through the pandemic was an experience Tkacik said he never thought he would live through. In particular, he missed the one-on-one interactions with the members of the Pelham community.

“It made it awkward for a while, and it was tough because we’re trying to figure out how we can keep ourselves safe while also doing our jobs and keeping the community safe,” he said. “After a while it fell together and it got better.”

Through emergency calls or everyday life on the force, Tkacik gives credit to the backbone of the department: the families of the officers.

“The families, like my family and my fellow officers’ families, they were so strong and they pulled together when we couldn’t be there for things like birthdays and holidays because we were working,” he said. “How they came together and knew that we had a job we were called to do, they took it with stride and made it through.”

Tkacik’s next chapter has already begun as he has started a new job working in the security department for Church of the Highlands. When asked if he was nervous about his new beginning, Tkacik chuckled and said the familiar faces he sees at church make it an easy transition.

“I’m leaving one place with familiar faces and I’m going to another one,” he said.

The thing he’s most excited to experience in his new chapter is time with family, something he said you can’t replace.

“I’m going to be home and we’re going to be able to do things on the weekend instead of me getting dressed up and having to go to an extra job,” he said. “It’s time for my family to get closer.”