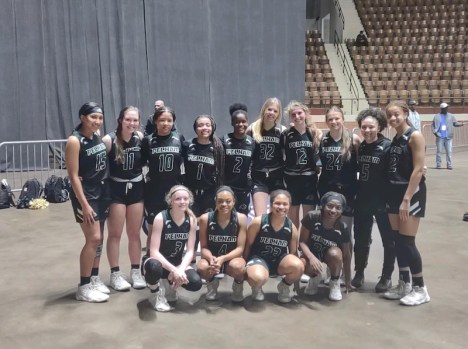 The Pelham Panthers made it to their first Elite Eight in school history on Thursday, Feb. 17 thanks to a 12-point win against Gulf Shores. (For the Reporter/Larry Dancy) 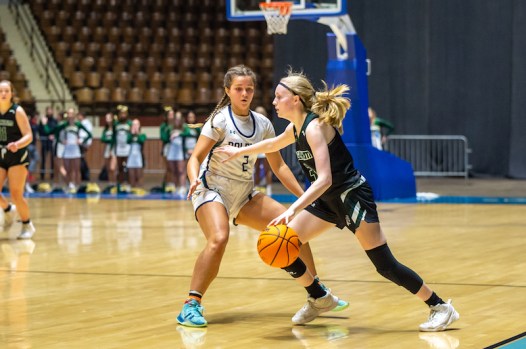 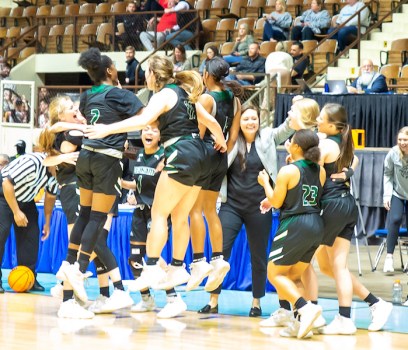 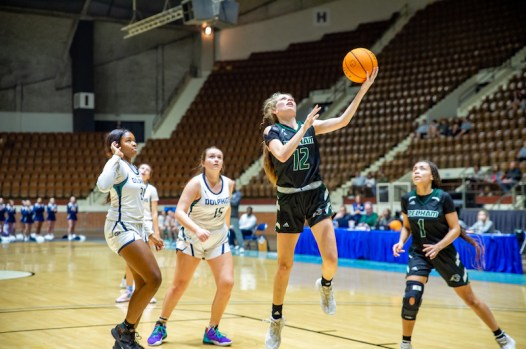 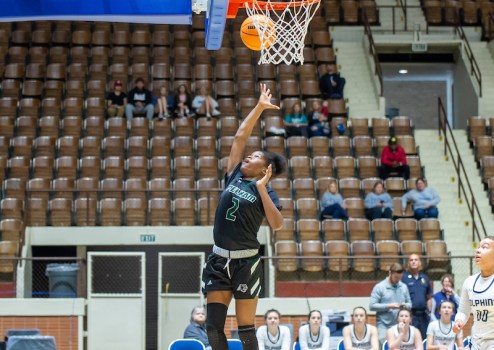 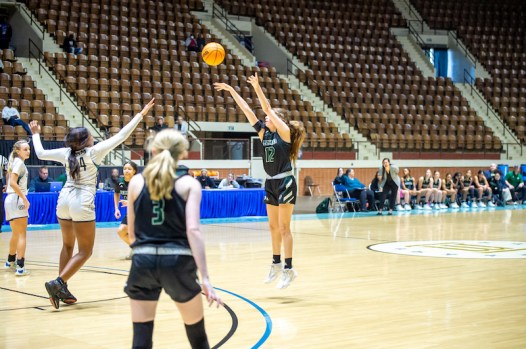 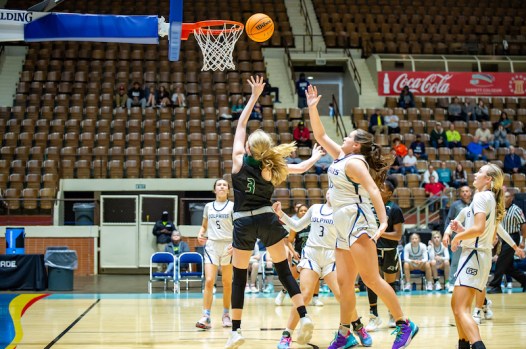 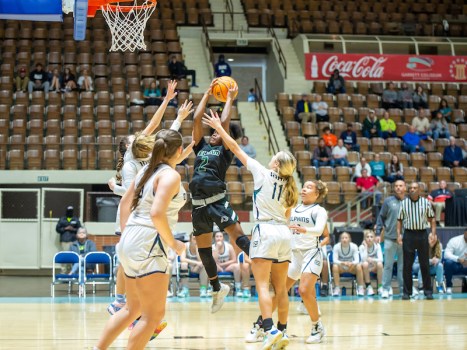 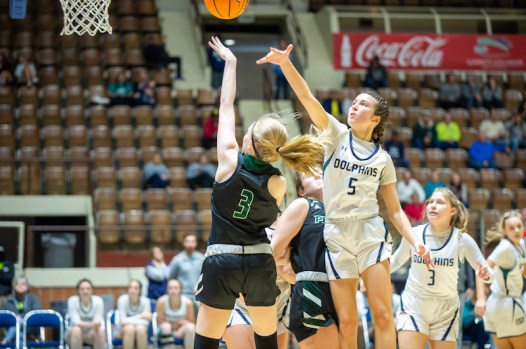 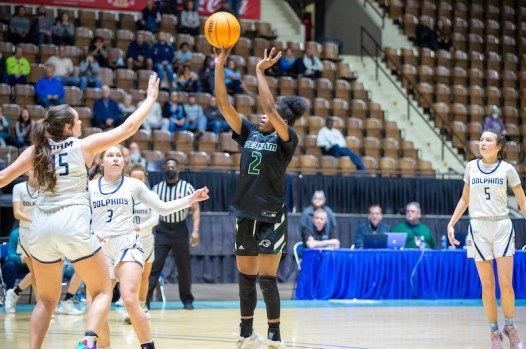 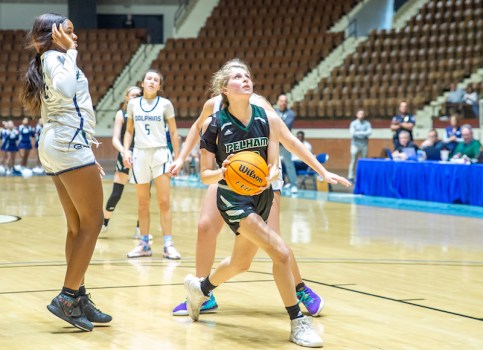 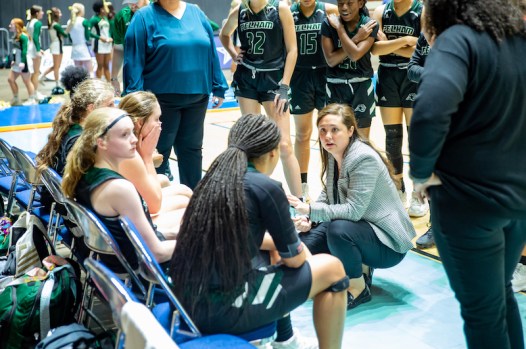 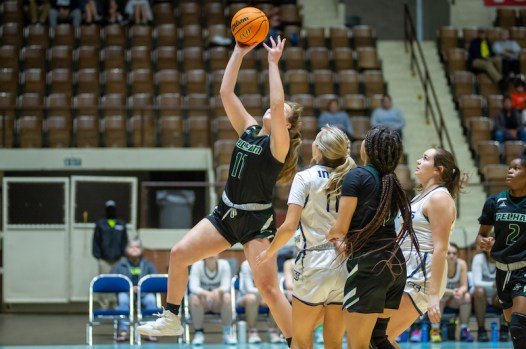 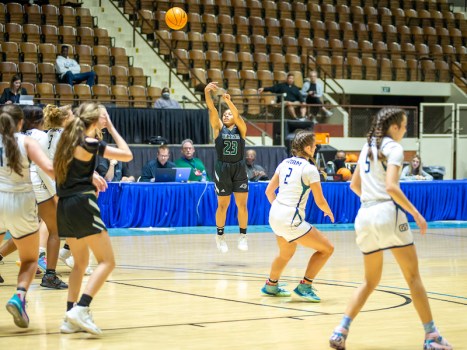 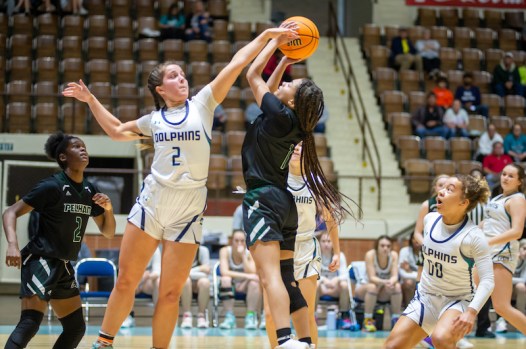 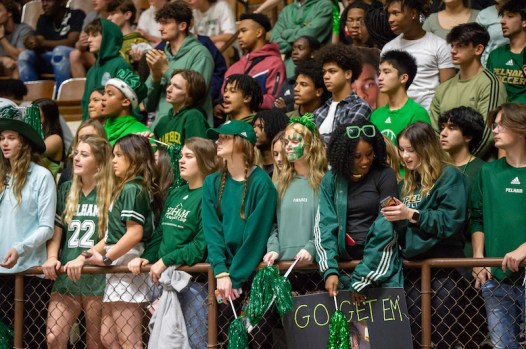 MONTGOMERY – It seemed tough for the Pelham Panthers to top a historic 2020-2021 basketball season entering this year, but they did just that on Thursday, Feb. 17.

Taking on Gulf Shores at Garrett Coliseum in Montgomery, the Panthers took a tight game at the end of three quarters and squashed it with a 19-11 fourth quarter to pick up a 53-41 victory and advance to the Elite Eight for the first time ever.

Up by four entering the final quarter, Pelham didn’t let the nerves get to them, looking to avenge a 16-point loss in the regional semifinal last year.

Instead, the Panthers stared the pressure right in the face and determined it was time to make more history.

Laci Gogan drained a 3-pointer to start the fourth quarter, which was then followed by two free throws from Victoria West that quickly put Pelham up by nine points.

Gulf Shores climbed back to within six points following a 3-pointer, but Pelham responded with baskets from West and Savannah Scarbrough that put them up by 10 points with 4:27 to play.

The lead eventually blossomed to 11 following another free throw, before two minutes of scoreless action ensued.

The Dolphins were able to get back within seven points with 1:49 to play, but at that point, it was too late.

The Panthers made seven of their eight free throws the rest of the way to seal the 12-point victory and school history.

Early in the game, Pelham jumped out to a 7-1 lead and looked to be taking control, eventually leading 9-3.

Gulf Shores, however, responded with a 9-2 run to take the lead for the first time at 12-11, which became the score at the end of the first quarter.

A back-and-forth saw three lead changes between the two teams, with Pelham quickly regaining a 17-14 advantage before a 6-1 run gave it back to the Dolphins with 3:15 to play in the period.

The Panthers then came out in the second half and looked like they were going to run away with it, outscoring Gulf Shores 12-2 through the first 3:47 of the third quarter.

Trailing 34-22, however, the Dolphins battled back with an 8-0 run to end the quarter and cut the deficit to 34-30 going to the final period.

But Pelham had seen confidence grow on the offensive side, and Gulf Shores couldn’t keep the Panthers from a final game-winning run.

The Panthers scored 19 in the quarter after being held to 12 or less the previous three quarters, while the defense finished off a game that saw them give up 12 or less in every period.

Pelham got 17 points from Gogan and 12 from West in the win, while Scarbrough and Myriah Tate both added seven. West also led the team with eight rebounds, while Gogan and Scarbrough each finished with four.

Tate led the team with three assists and finished second with six rebounds.

Pelham’s defense forced 25 turnovers, which were key in an impressive defensive effort.

The Panthers will now take on McGill-Toolen of Helena in the Elite Eight on Tuesday, Feb. 22 at 6 p.m. looking to punch a ticket to the Final Four.