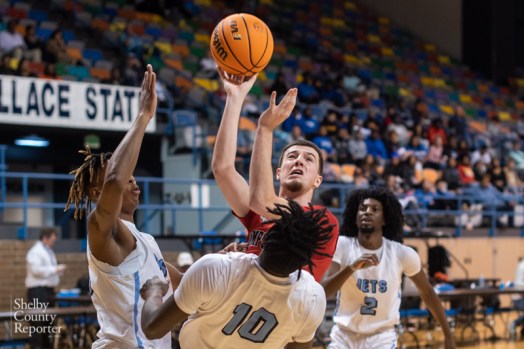 Thompson’s Wesley Roberson played his final game for the Warriors and totaled nine points in a comeback attempt that fell short against James Clemens in the Sweet 16. (Reporter photo/Keith McCoy) 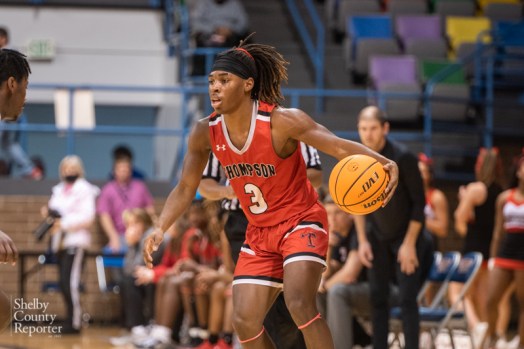 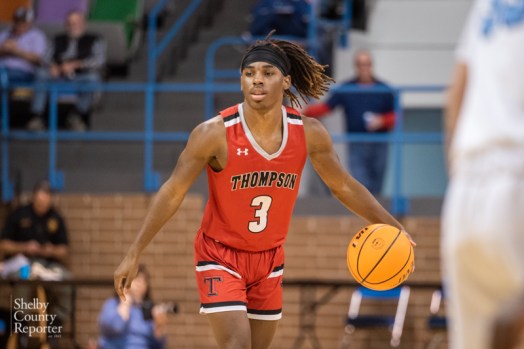 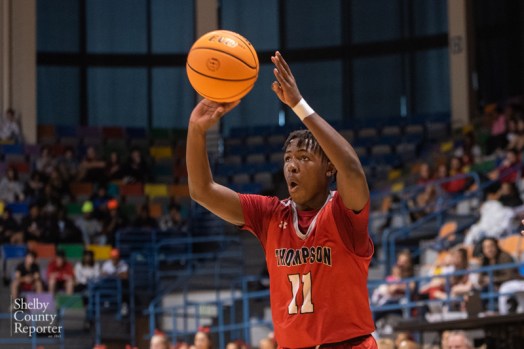 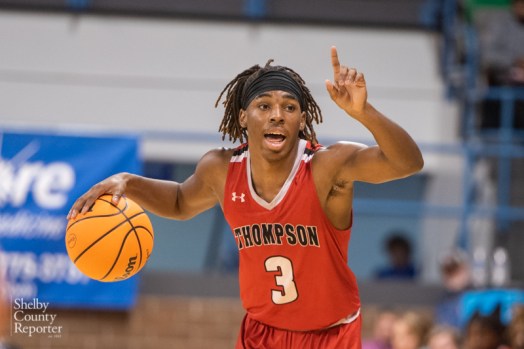 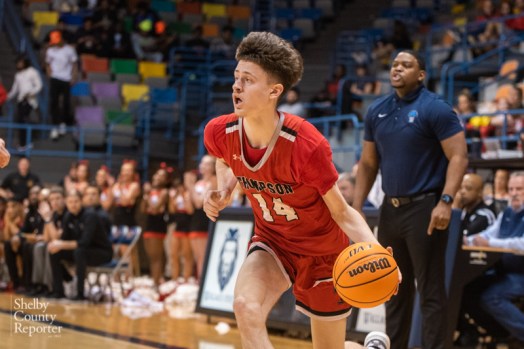 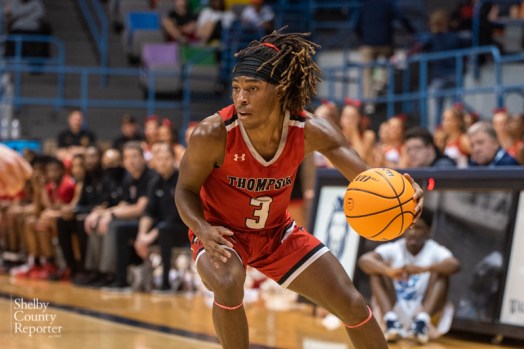 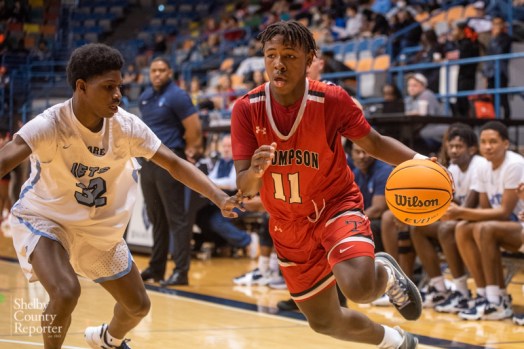 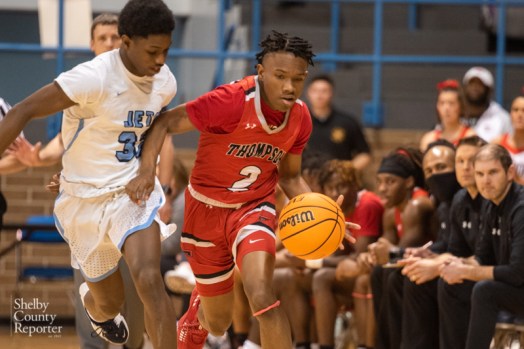 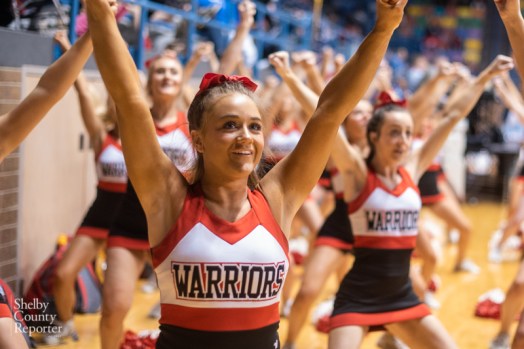 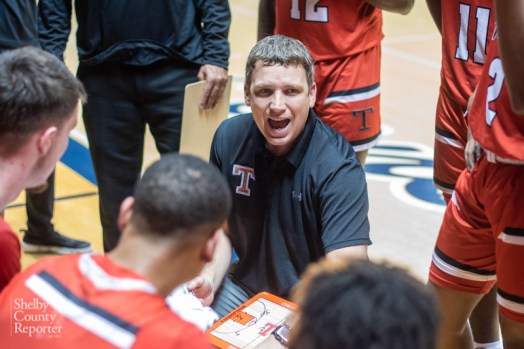 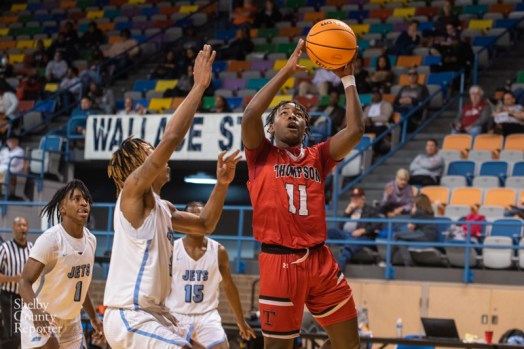 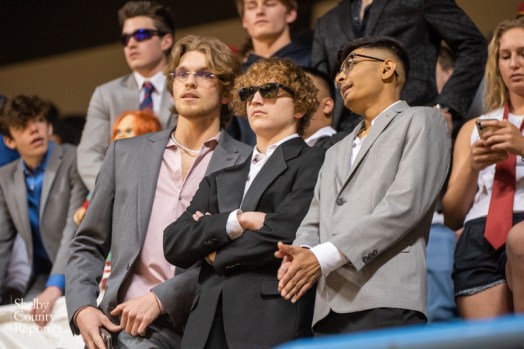 HANCEVILLE – Entering the 2021-2022 basketball season, the Thompson Warriors returned two players from the previous season, only one of which was a senior, making a Sweet-16 run from one of the state’s toughest areas a challenging task.

On Thursday, Feb. 17, however, the Warriors got that opportunity, and despite a 56-38 loss to James Clemens, head coach Dru Powell was proud of what he saw.

“It’s really, really hard to get here in our league,” Powell said after the game. “We’re excited to be here, because as hard as it is to get here, it’s that much harder to get back. I told them, ‘Don’t take this for granted.’ There were some really good teams sitting at home that didn’t get this experience. Learn from it and hopefully we can earn our way back.”

And the future is one reason Powell is excited.

With only three seniors on the team, one of which started last year in Wesley Roberson, he knew getting his team settled in would be difficult, which led to a 14-0 deficit out of the gate in the opening quarter.

“We’ve been in that spot several times now,” Powell said of the early deficit. “We’ve been down big and have been in that position. Sometimes it takes time for our younger guys to feel out the flow of the game. But we told them, ‘We’re good enough to be here, we earned the right to be here.’ Understanding the flow, the speed of the game, the physicality, took longer than expected, but they realized they earned the right to be here.”

Thompson battled back to within 11 at the end of the quarter with a 3-pointer in the final minute the only basket of the first quarter for the Warriors.

The deficit, however, blossomed to 15 points at 20-5 early in the second quarter, before the Warriors started to find some success.

In need of a big third quarter to chip away at the deficit, Thompson got just that.

The Warriors used two separate 6-0 runs featuring a combined six points from Carson Pringle and a combined four from Wesley Roberson—the two starters back—to help trim the deficit to single digits going to the final quarter in a 32-24 game.

“We knew lack of experience would be an issue,” Powell said. “I didn’t know it would be a 16-0 start, but I’m really proud of how these guys responded. Bright lights and big stage, they didn’t let that get to them.”

Thompson capitalized on the momentum, eventually cutting the deficit all the way down to seven points at 36-29 midway through the final quarter.

From there, however, Roberson and Pringle both fouled out with four minutes left, and the Jets responded with a big stretch, ending the game on a 20-9 run over the final few minutes.

Roberson, a senior leader, was proud of his team’s effort despite the loss.

“Coming into the season, nobody expected anything from us,” Roberson said. “Everybody in the locker room believed in each other. When everybody believes in everybody, something special can happen.”

Thompson was led by nine points each from Pringle and Roberson, while Pringle led the team in rebounds with seven. The Warriors also got eight points from Jay Green, who finished 3-3 from the floor.

As a team, the Warriors shot 51.9 percent from the floor but only took 27 shots compared to 44 from James Clemens, who shot 47.7 percent. Thompson also had 26 turnovers compared to 15 from the Jets.