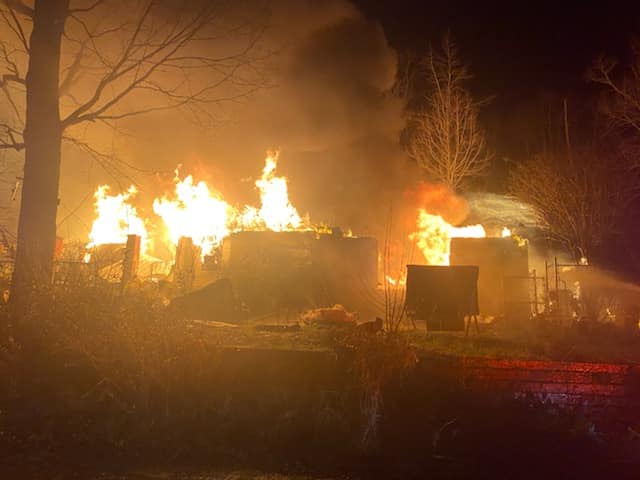 Fire crews respond to a house fire in the Dunnavant community that left one person with minor injuries on the morning of Friday, Feb. 18. (Contributed)

NORTH SHELBY – One person sustained minor injuries in a house fire in the Dunnavant community on the morning of Friday, Feb. 18.

Firefighters from several departments responded to the scene at about 1 a.m. and aided in the rescue of one of the home’s occupants, according to a post on the Cahaba Valley Fire and EMR District’s Facebook page.

“Dunnavant Fire, Cahaba Valley Fire and Vandiver Fire were dispatched to a house fire in the Dunnavant community with reports that a bed-bound occupant was still inside,” the post read. “Crews arrived on scene to find a house well involved and family members still attempting (to) evacuate the bed-bound occupant.”

Crews from Battalion 188 and Rescue 185 made the rescue and provided on-scene medical treatment, while Engine 183 worked to extinguish the fire.

The person rescued was transported to a nearby emergency department for evaluation of minor injuries.

Wilks said the community lost power during storms that moved through the area on the night of Thursday, Feb. 17, but the exact cause of the house fire has not been determined.