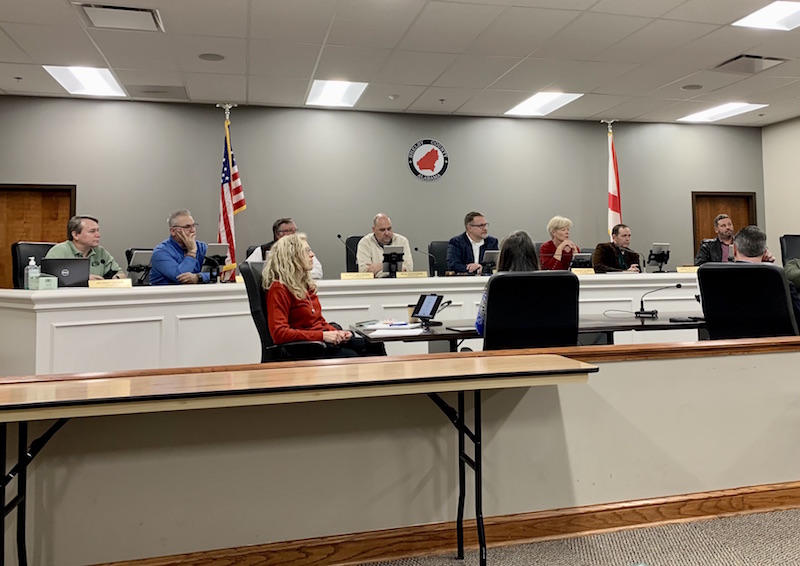 COLUMBIANA – A group of Calera leaders and residents spoke to the Shelby County Commission on Monday, Feb. 14 about ongoing traffic issues on roads throughout the city.

Several members of the Calera City Council spoke during the public comment portion of the meeting, expressing concerns about population growth and new home construction putting more strain on the city’s infrastructure.

“We’re staring at an infrastructure nightmare off Exit 234 and throughout the city,” Councilmember Kay Snowden Turner said. “We need your support as soon as possible. I’m just asking for your sincere consideration for priority funding for us.”

Local resident Todd Workman echoed Turner’s statements, and said the construction of hundreds of new homes in Calera, along with the city’s proximity to Interstate 65, contribute to the high volume of traffic coming through the area daily and causing congestion along roads like Shelby County 12 (Smokey Road) and Shelby County 87.

“I’m not here to stop progress with these cities,” Workman said. “I think the issue for me is do we have infrastructure to support it. It’s going to be a major issue if we keep building the way we’re building.”

County Engineer Randy Cole said the county works to maintain its roads and partners with the Alabama Department of Transportation on projects when possible.

One such project involved the installation of a traffic circle, also known as a roundabout, at the intersection of Weather Vane Road and Shelby County 87 near the Shelby County Airport exit last year to help with traffic flow.

In a previous story, Cole said the Commission had looked at the option of installing a traffic signal, but the overall consensus was that a standard traffic light might hamper traffic attempting to exit I-65 southbound.

“We did not want the queue of a traffic signal to back up and cause folks to come to a standstill on the interstate,” he said at the time.

ALDOT concurred with the county’s assessment that a roundabout would be a good approach to resolving the issue, and awarded a $1-million-plus grant to fund the project.

Now, Cole said the county is looking at congestion on the other side of the same interstate exit, where traffic exits I-65 northbound.

“We’re getting complaints that folks can’t get off of the interstate and turn left, so they’re turning right and going down to the Alabama Power entrance and doing a U-turn,” Cole said. “It shows that we’ve got issues there, and it probably needs to be signalized. It is never acceptable to have traffic backing up on the interstate.”

Regarding county roads, Cole said the concept of adding lanes to alleviate traffic congestion from more residential developments is an expensive proposition.

Commission Chairman Kevin Morris thanked those who spoke for sharing their concerns, and said County Manager Chad Scroggins, who was out-of-town and unable to attend the meeting, was interested in looking at how the county could assist Calera.

“What he wanted me to stress to your group was that he is aware of it, and he was going to be looking at what we could do in coordination with the group there in Calera to look at the problem,” Morris said. “I appreciate you coming here with us today.”