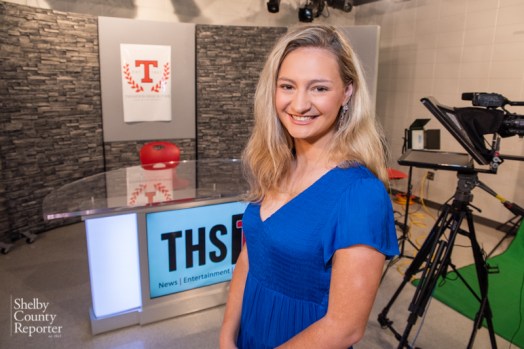 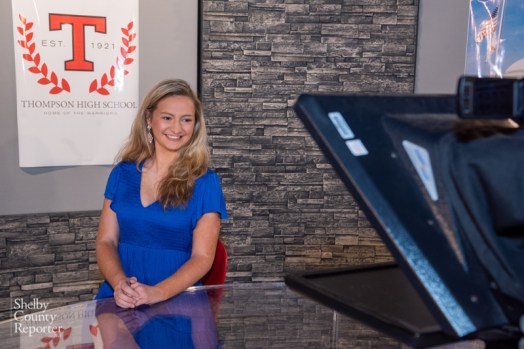 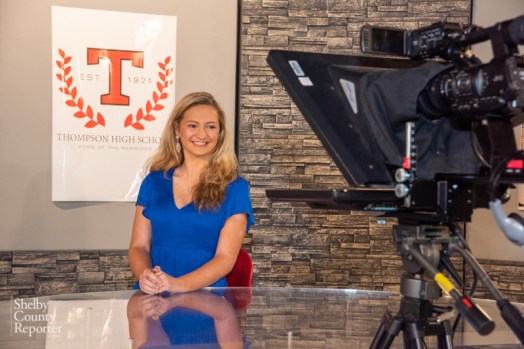 ALABASTER – Coming from a medical family, Ansley Brown had never thought about broadcast journalism as a career, but one weekend in 2021 changed that.

“When I covered the wrestling state package, I saw it, and I watched it back,” Brown said. “I was like, ‘I think this is really good. I think it’s something I could continue to do and improve on.’”

Then, the ASPA Convention opened her eyes. Seeing the awards and different talent recognized, she set the goal of doing the same a year later.

Watching the convention with her classmates and teacher Christina Chambers at Thompson High School, Brown’s nervous hands quickly moved to covering her emotional face after her name popped up on the screen twice as both the Broadcaster of the Year and Journalist of the Year.

“I told everyone beforehand, that it probably wasn’t going to be me,” Brown said. “Looking at all of the competition, I didn’t realize how many talented people there were participating. But my classmates were fully confident in me. I just hoped I wasn’t going to let them down.”

Brown sat in anticipation before the award was announced, and even told Chambers she felt like she was going to be sick.

Then, they announced her name.

“I was very excited,” she said. “I don’t even know what I was thinking. It was just crazy. I had only been in this program since last year and I couldn’t even imagine this year. Last year, I felt like I knew nothing and was the odd man out. I feel like I’ve proved that hard work and dedication and everything just pays off.”

Chambers, who took over the class in August fresh from Fox 6 as a broadcaster, said Brown’s dedication was key in her success.

“Ansley is the type of student who puts in the work. She will sit by herself, she asks questions, she’s constantly working,” Chambers said. “When she is in the classroom, you can tell she wants to get better. The minute I stepped foot on campus, you could tell which students were going to take it seriously. She’s definitely one right away that you could see the potential. She gets it. She understands journalism, she understands how to interview, how to edit, how to write.”

She added that she always emphasized hard work and wanting to improve as important factors in the success of her students, which Brown realized.

Brown had to put together a website that featured different packages for reporting, anchoring, sports coverage and writing, while also sharing other facets of her work throughout media.

It was a time-consuming challenge as a full-time student that had Brown working on the website during downtimes at her actually job at Lifetime Fitness.

She had to do all of that with the pressure of Thompson winning the Broadcaster of the Year award the previous 12 years in a row.

“Last year, the seniors said that one of us had to do it coming into this year since it had been done 12 years in a row,” Brown said. “I was like, ‘OK, that is something I am interested in.’”

So she started in October and spent hours and hours getting it together for three months.

“I was so happy with what I put together,” she said. “I even put a note on my last page thanking them for the opportunity. I figured out a lot about myself in that process. I think it gave me clarity on what I wanted to do and what I wanted to pursue in college and beyond. I was more thankful for that than anything.”

Brown wasn’t even considering the program until a former classmate of hers, Brad Lewis, told her during her sophomore year that she should join.

She went out on a limb, applied and got into the program. That was already further than she thought she would get.

She came in not knowing anything about broadcasting, but quickly picked it up, and by her second semester, she knew it could become a career.

Brown said she enjoys working on packages out in the field, gathering B-roll, doing interviews and editing it to put it together for a production with the entire team.

“I’m proud of the work I produced and that I put myself out there,” she said. “

Now, she’ll not only go on to compete in nationals with a trip to Los Angeles, but she knows she will be majoring in communications when she gets to college, hoping to chase down a job in news or sports reporting.