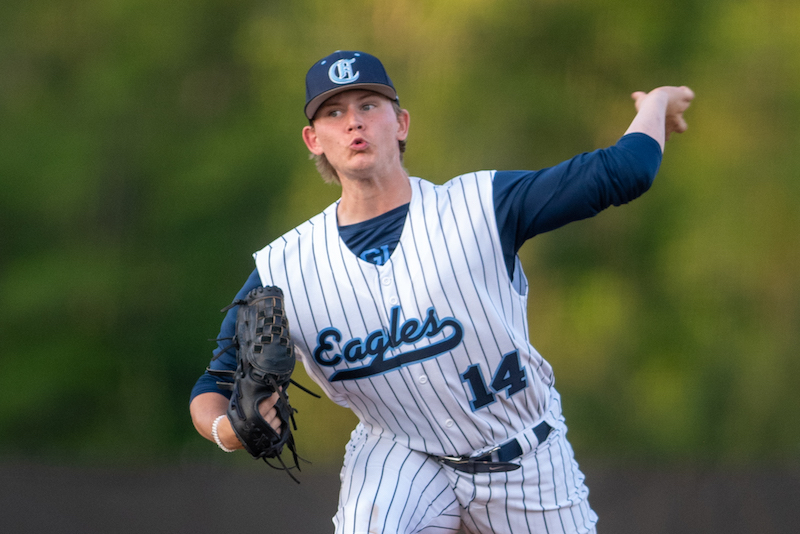 The Calera Eagles picked up two wins on opening day, beating Tallassee by 10 and rival Montevallo by one with a walk-off single. (File)

CALERA – In the first weekend under first-year head coach Joe Sparacino, the Calera Eagles got off to a 2-0 start to the 2022 season on Saturday, Feb. 19 with a 10-run win against Tallassee and a thrilling walk-off victory against county foe Montevallo.

The two wins showed the balance by which the Eagles could win early in the season, using offense to pull away in the opener and clutch play and strong pitching to win the second.

The pitching was on point in the opening game against Tallassee as Matthew Bullard got off to an impressive start for his senior season.

He went four innings and allowed no hits while striking out seven of the 12 batters he faced.

That put the Eagles in front 5-0 through four innings, which became the end of Bullard’s day on the mound.

Tallassee did respond with a run in the top of the fifth, but that was all.

After a quiet bottom of the fifth, the Eagles came back and put the game away for the 10-run rule win in the sixth with a six-run inning.

Tyler Douglas and Cole Seeback totaled multiple hits in the win with Douglas picking up three and Seeback adding two.

Douglas also finished with a game-high five RBIs, while Ben Graham finished just behind with three.

Lane busby closed out the final two innings on the mound for the Eagles, allowing just two hits in that span.

In the second game against rival Montevallo, it took a more thrilling finish for Calera to improve to 2-0 on the young season.

The Eagles were able to take a 1-0 lead in the bottom of the second, which looked like it would be enough for a while.

That was until Montevallo added a run in the top of the sixth to tie the game.

Calera, however, responded in the bottom of the seventh with a walk-off RBI single from Bentley Berry for the 2-1 win.

Also impressive in the winning effort was the pitching. Douglas was especially impressive for the Eagles, going four innings and striking out six in his first action of the season.