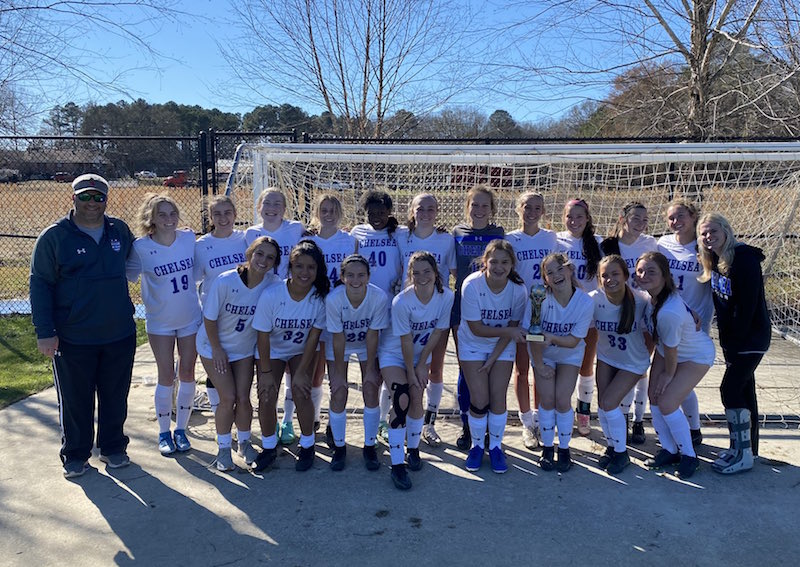 Chelsea’s girls took home the Gold Division title at this year’s Lakeshore Shootout, while Oak Mountain’s girls finished in second with a 1-0-1 record in the Platinum Division. (Contributed)

Early in the season, the Chelsea girls soccer team has been playing at another level, and that continued during this year’s Lakeshore Shootout girls weekend.

Taking on some of the best talent in the state, the Hornets won three consecutive games to finish 3-0 at the tournament to continue an eight-game win streak since their season-opening loss to Oak Mountain.

Chelsea was the only team in the Gold Division of the tournament to win more than one game, giving them 26 points on the 10-point system, which was nine more than Northridge in second place.

The Hornets opened the tournament with a matchup against Spanish Fort and started a thrilling stretch of three games in two days.

Against the Toros, Chelsea was able to claim its first of two straight one-goal victories, picking up a 2-1 win.

Later that night, the Hornets matched up against Northridge and found themselves in another thrilling battle.

But great offensive play helped Chelsea pick up the win as Avery Burleson, Finley Walker and Danielle Burge each had one goal in a 3-2 victory to push the Hornets to 2-0 at the tournament.

Chelsea then came back the next day and put together its best showing of the tournament with a balanced effort. The defense posted its fourth shutout of the season, while the offense added two more goals, one in each half to grab a 2-0 win.

The Hornets finished just four points shy of a perfect score at the event. They have now allowed one goal or less in all but two of their nine games so far, while they have scored two or more goals in five straight.

Also competing at the tournament was Oak Mountain, who had handed Chelsea its only loss this season.

The Eagles, however, competed in the Platinum Division, preventing a rematch between the two teams.

Oak Mountain finished second to Homewood in the division, getting one less game than the Patriots with a draw between the two making the difference in the final standings.

The Class 7A No. 1 Eagles entered the tournament 5-0 on the season, but got one of their toughest tests of the season in the opening game with a matchup against 6A No. 1 Homewood.

And both teams put their defense on display in the tournament, which led to a 0-0 stalemate following an intense battle.

The Eagles also responded a day later with a matchup against rival Spain Park by grabbing a 2-1 victory against the Jags to finish the tournament 1-1.

The Patriots totaled 22 points with their two wins and three shutouts, while Oak Mountain finished with 12 points playing in just two games. Spain Park went 1-2 in the tournament with two one-goal losses, while adding a 3-2 win against Columbus.