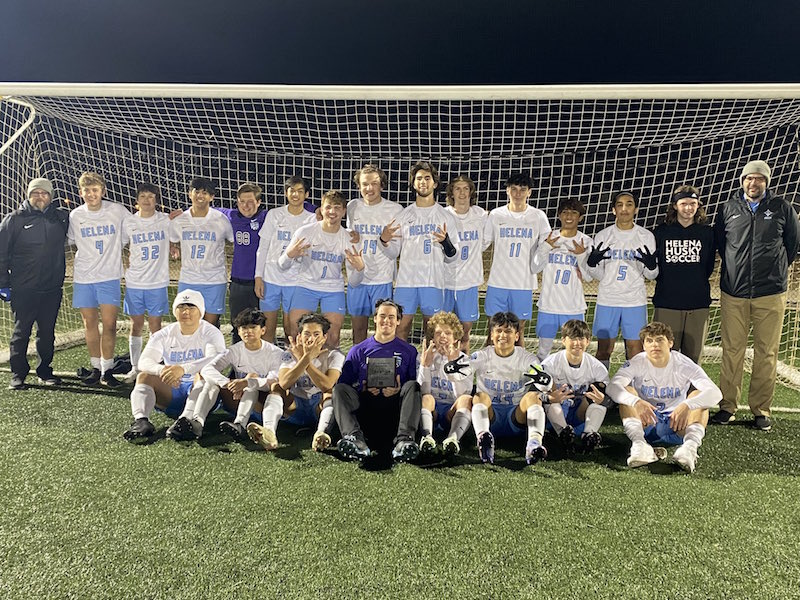 HUNTSVILLE – After an up-and-down start to the 2022 soccer season, the Helena Huskies put together a special run between Friday, Feb. 18 and Saturday, Feb. 19 to bring home the Falcon Fest Championship.

Helena entered the tournament at Merrimack Soccer Complex in Huntsville with a 2-3-1 overall record through its first six games of the season, but that quickly went out the window.

The Huskies opened the tournament with a 1-1 tie against Sparkman, but from there, they found their best stretch of the season so far with three consecutive wins by at least three goals, including a rematch against Sparkman, to bring home the title.

In the opener, Helena did enough in a hard-fought game to pull off a 1-1 tie thanks to a goal from James Solorio and strong defensive match, which became a theme throughout the tournament.

Back in action the next morning at 8 a.m., the Huskies squared off with Buckhorn.

In one of the best outings of the season, Helena posted a shutout, while Solorio, Luis Robles, Conner Henderson and Cade Shannon each added one goal for a 4-0 victory.

That just continued to build Helena’s confidence, especially Solorio’s offensively and the defense as a whole.

Shortly after the Buckhorn win, they took to the field against Randolph and took control early.

Solorio totaled the hat trick with three more goals in a 5-1 victory, while Robles and Cesar Gonzalez each added one goal in a dominant effort.

That punched Helena’s ticket to the championship game, where the Huskies earned a rematch against Sparkman.

Looking for redemption from the tie a day earlier, the Huskies looked like a completely different team this time, using the momentum of their back-to-back wins.

This time around, Gonzalez put together multiple goals with two, while Alex Perry added one.

After the tournament championship, Helena improved to 5-3-2 on the season. The Huskies have posted five shutouts on the season in their 10 games, while they have given up one goal or less in four in a row and five of six.