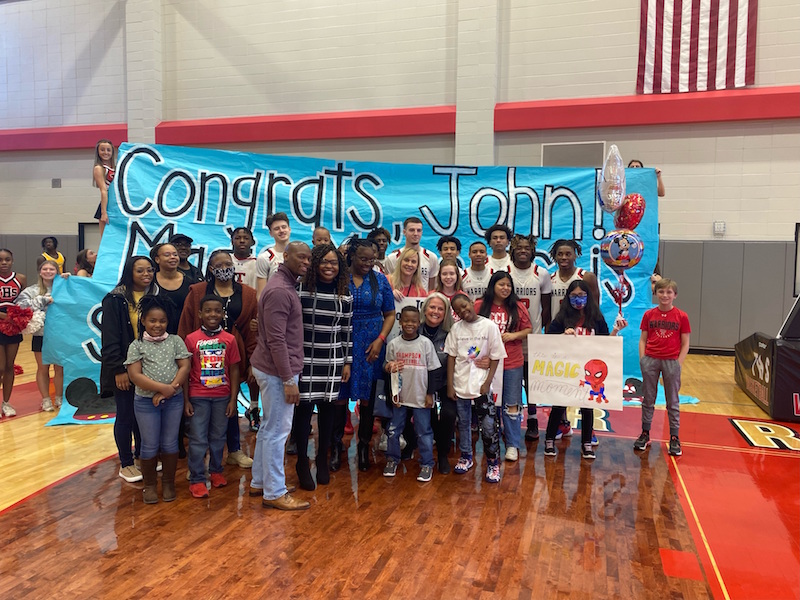 John Ashley was recently surprised at a Thompson basketball game with a surprise trip to Disney World. (Contributed)

ALABASTER – An Alabaster family will be heading to Disney this May after being surprised with the trip through Magic Moments and Alabaster City Schools.

Magic Moments is the only wish granting organization devoted exclusively to creating “magic moments” in the lives of children in Alabama with chronically life-threatening medical conditions, according to the organization’s website.

A magic moment allows children and their families to forget, even if just for a little while, the fear and pain of their illness.

“We were so excited to help surprise him with his dream trip to Disney,” Deaile said. “Coach Dru Powell was immediately willing to help us surprise the student.”

John had a form of bone cancer and has endured treatments that included getting a new bone in his leg.

John’s mother, Asha Ashley, posted on Facebook that the journey has not been easy, but she credits God for helping her family through it all.

Ashley thanked Magic Moments and Alabaster City Schools for helping to create the special moment for her son.

“We still have a ways to go, but Jesus has been with us every step of the way,” she said. “John kept saying, ‘but mama, are you for real? Do we really get to go?”

Deaile said FCCLA is proud to partner with the Magic Moments organization to make dreams come true for local heroes.

FCCLA had a Valentine’s bake sale and all proceeds from the sale went to Magic Moments.

The family trip is planned for May of this year, and Deaile said the FCCLA loved being a small part of John’s journey.