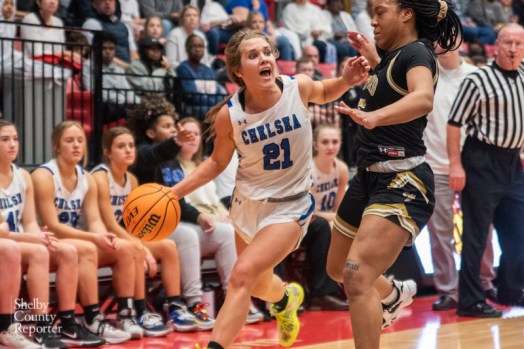 Chelsea senior Sydney Schwallie closed out a special career with eight points and four rebounds in the Elite Eight. The Hornets lost a heartbreaker 53-52 to fall one game short of a second straight trip to the Final Four. (Reporter photo/Keith McCoy) 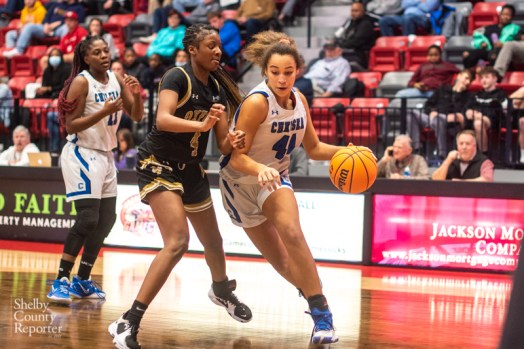 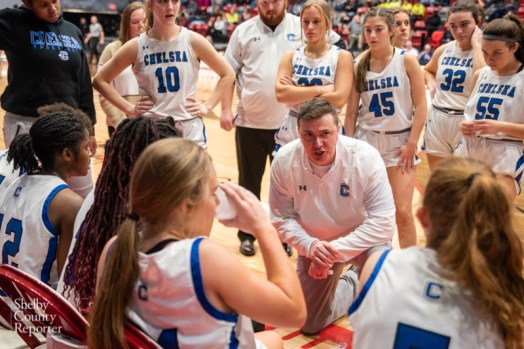 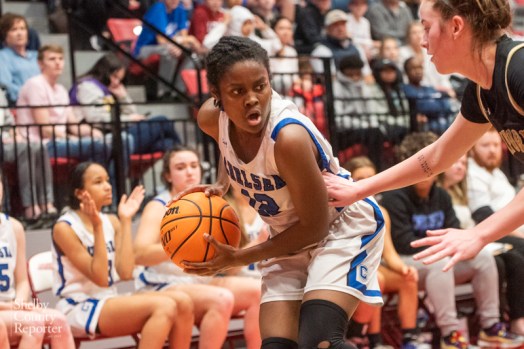 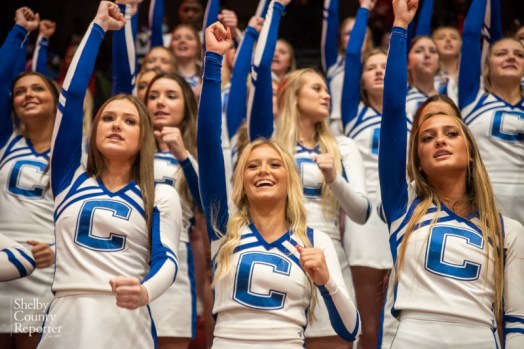 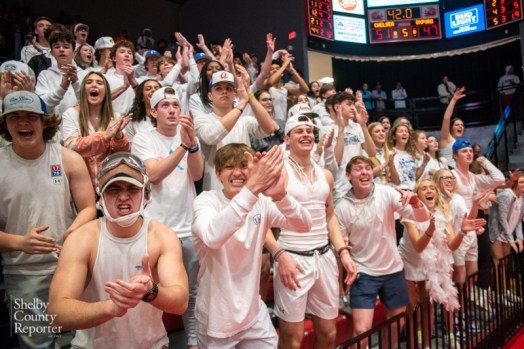 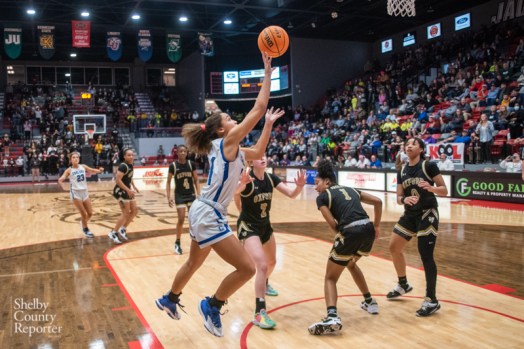 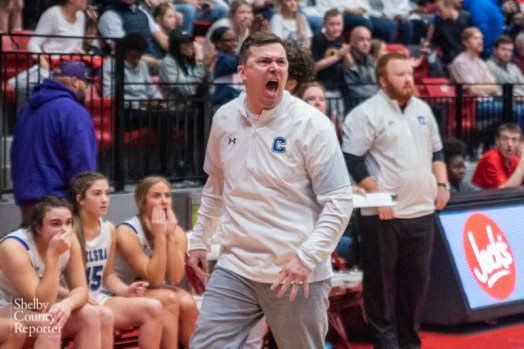 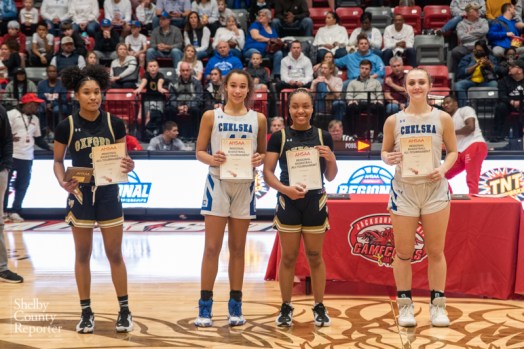 JACKSONVILLE – As the final buzzer sounded on a 53-52 overtime loss to Oxford in the Elite Eight on Monday, Feb. 21, heartbreak ensued for the Chelsea Hornets and five seniors who had poured years of hard work and dedication into changing the program.

The Hornets, who held a three-point lead at the end of regulation only to have a 3-pointer drained at the buzzer after a missed free throw and to then have a chance at the tie with 0.3 seconds left in overtime but miss one more free throw, walked away devastated.

But the five seniors in the program had done something no other had before them, which left head coach Jason Harlow amazed and emotional after the game talking about the group that had been with him all four years at Chelsea.

“I really don’t have words to explain how much those five seniors in that locker room meant to me,” Harlow said. “It’s the first class I had at Chelsea all the way through. They’ve completely turned it around and did it the right way through tremendous work ethic and fantastic character. I’ll always be grateful for what they have meat to me.”

All the group did was take a 5-22 team during the 2017-18 season and turn it into a team that won four consecutive area championships, post a winning record four straight years, make at least the Sweet 16 all four years, win 20-plus games in three straight years, make back-to-back Elite Eight appearances and the school’s first Final Four appearance.

“There wasn’t a lot of tradition, but these girls took that and changed the expectation,” Harlow said. “A lot of people pat me on the back for what a good job I’ve done, but what they don’t understand is the character of these five seniors and what they did to build this program into a team that won back-to-back regional finals and made a Final Four.

“I can’t say enough about their character, not just as human beings, but fantastic basketball players. It hurts so bad that I won’t get to coach them again.”

Despite the loss, Chelsea battled to the end in a game that saw major momentums wings between the first half and third quarter.

Chelsea looked ready to run away in the opening quarter of the game behind a 10-0 run out of the gate.

The Hornets got four points from Lexi Redd and two each from Mary Cartee, Nia Cummings and Haley Trotter in a hot start from the floor.

More impressively, the defense matched the effort, which has been the case all season.

Oxford struggled to find anything offensively early, not scoring until there was 2:05 left in the opening quarter.

Chelsea, on the other hand, scored four more on shots from Cartee and Trotter to extend the lead to 14-2 before an Oxford free throw made it 14-3 going to the second quarter.

Seeing shots fall late in the quarter, the Yellow Jackets had shaken off the nerves, which showed early in the second quarter, putting together an 8-0 run to start the quarter.

That brought them to within three points before Chelsea got right back into a rhythm.

The Hornets hit back-to-back 3-pointers from Cartee and Washington late in the quarter and got one more layup from Trotter to finish the half shooting 54.5 percent from the field and 33.3 percent from three.

Chelsea’s defense held Oxford to 28.6 percent from the field and 0-8 from beyond the arc.

But the game became a tale of two halves.

Oxford made adjustments at the half into a press that saw the Yellow Jackets get into the passing lanes and force frantic dribbling from Chelsea.

The Yellow Jackets used that to their advantage, scoring nine points off turnovers to go on a 17-4 run in the quarter and cut the deficit to 34-32 heading to the final quarter.

“We talked about it,” Harlow said of the pressure. “They’re such a great pressing team and started to jump out of it more. They came into the game with a 2-3 zone, and that’s not who they are. They just got back to their identity. We made a lot of mistakes and turned the ball over in the third quarter. We’ve been a team in the past, with a lead, we try to dominate that first five minutes and we didn’t do it today.”

That led to a back-and-forth final quarter that saw Chelsea lead by as many as five points on two different occasions.

With 1:05 left and Chelsea looking to make it a six-point game, the Hornets missed two open layups at the rim, which was followed quickly by a 3-pointer from Oxford to get within two points.

After turning it over and then getting it back with strong defense, Chelsea made one of two at the line with 17.1 seconds to play for a 45-42 lead.

The Hornets then stepped up defensively again, forcing an air ball with 7.3 seconds left to get the ball back.

But after missing the front end of the one-and-one, Oxford’s Kaleah Taylor drained a 3-pointer right as the buzzer sounded to tie the game at 45-45 and force overtime.

In overtime, Chelsea again had chances to close it out after going up 51-47 with 44 seconds to play.

Oxford, however, responded with a layup 12 seconds later, then and and-1 with 21 seconds left off a turnover from the Hornets.

That quickly put Oxford in front 52-51 with 20 seconds left.

Chelsea got the ball, Trotter drove down the lane for what looked to be a foul, but instead was called a travel.

That gave it back to Oxford, who made one of two at the line for a 53-51 lead with three seconds left.

The Hornets the inbounded the ball and Schwallie was fouled with 0.3 left, giving Chelsea a chance to tie.

But after missing the first of the two free throws, the Hornets fell one point shy despite a make on the second.

Despite the heartbreaking end, the Hornets, especially the seniors reflected on what they were able to do and what it means for the future.

“They’ll keep doing good. Every year, people thought we would be worse, but every year we’ve set new records,” Schwallie said. “Coach Harlow has helped us along the way. We have a good work ethic and they’ll continue to be follow that and be good.”

Cartee said this year’s group was a team of sisters always willing to do what was needed of each other to bring everyone together as a team.