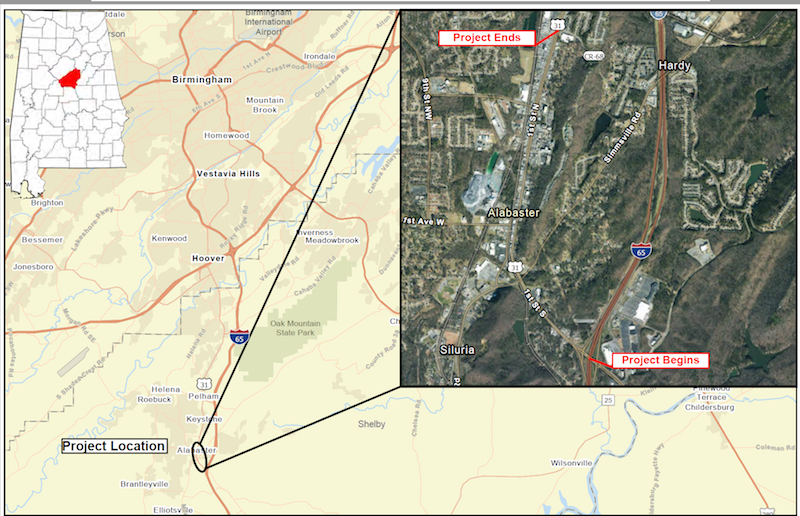 ALDOT is seeking input from residents of Alabaster regarding a project that will modify areas along U.S. 31 and Shelby County 68. (Contributed)

ALABASTER – In an effort to improve traffic flow along U.S. 31 between exit 238 and Shelby County 68, the Alabama Department of Public Transportation is seeking the public’s input on the project until March 4.

According to ALDOT’s description of the project, it will help to provide access management features in Alabaster, including modifying and removing various driveways, median alterations, and modifying turning movements along U.S. 31 from Interstate 65 and Shelby County 68.

Although there is currently no projected start or end date for the project, construction of the project is expected to be completed under normal traffic operations, with intermittent lane closures, according to ALDOT’s website.

ALDOT is interested in obtaining input from residents who use this route.

City engineer Fred Hawkins said Alabaster has a great partnership with ALDOT, and they have been working with ALDOT to improve traffic to the key traffic corridors, including U.S. 31.

“This project will not only resurface Highway 31 from exit 238 to Highway 68, but it will add longer turn lanes at some of the highway’s high-traffic intersections,” Hawkins said. “There will also be some access management changes, which will limit center turn lanes to more focused areas.”

Hawkins said the goal of the entire project is to improve safety and traffic flow along the corridor.

“We appreciate ALDOT making this project a priority, and we encourage residents to participate in the virtual public input session,” Hawkins said.

Anyone wishing to share input, can visit the link Dot.state.al.us/news/publicinvolvement.html.