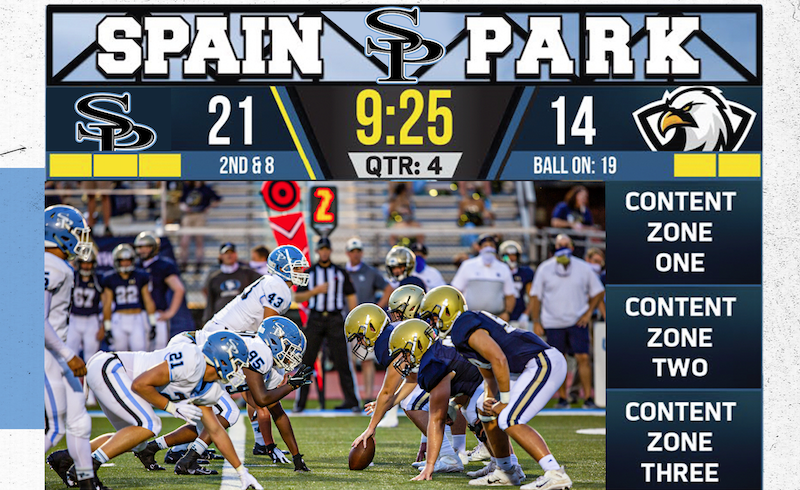 Spain Park is in the process of raising funds to put a jumbotron at Jaguar Stadium for football and track use. (Contributed)

HOOVER – Two months into the job at Spain Park High School and new head coach Tim Vakakes is making moves to try and create excitement around the football program.

One of his first big tasks has been to have a jumbotron built on the field, and that project got a big boost on Monday, Feb. 21.

At the Hoover City Council meeting that night, the city approved contributing $50,000 toward the project to help make it a reality.

“Coach Vakakes, when he came on board a few weeks ago, had a vision and a dream to put a jumbotron at Jaguar Stadium,” Hoover City Council President John Lyda said. “It’s long overdue and the city of Hoover and my colleagues, based on the mayor’s recommendation, voted tonight for a contribution of $50,000 toward that.”

Vakakes said they are 2/3 of the way toward reaching the necessary funding for the jumbotron.

“First thing, thank you to the council and mayor. It’s obviously a blessing to be at Spain Park,” Vakakes said. “I’ve been in Birmingham for 20 something years coaching. People tell me all the time, ‘you deserve it, you’ve earned it.’ Like I told our parents, I don’t feel like I deserve it. I don’t think I’ve earned it. I think I’ve been blessed with it. That’s two different trains of thought. We’re here to serve these kids, they’re not here to serve us.”

He said with that train of thought, he wanted to make sure to do something to create excitement among the players early in his tenure.

“One thing I wanted to make sure was we get some excitement at Spain Park and keep our kids,” Vakakes said. “I was able to get a jumbotron in Ensley at Jackson-Olin, and I said there is no way we can’t do it here. I met with our booster club and we’ve got some really good go getters on the booster club. We’ve got naming rights for the board, and I brought it to the city, and obviously they were gracious to meet with me a few weeks ago and they blessed us with this.”

He added that the project is moving swiftly and they are also making sure it is a jumbotron that can handle track software so that it benefits more than just the football team.

“Once it’s paid for and in the ground, it is going to be a fundraiser moneymaker every year for us and for the program,” Vakakes said. “It’s not just going to be a football deal. It just brings a lot more exposure to our kids and excitement to our kids.”

He said his goal is to match the energy of Hoover High School has always had when it comes to athletics, while reminding people that Spain Park has played for two championships.

Vakakes said he is ready to roll up his sleeves and get to work, while hoping to make the city proud in the process.