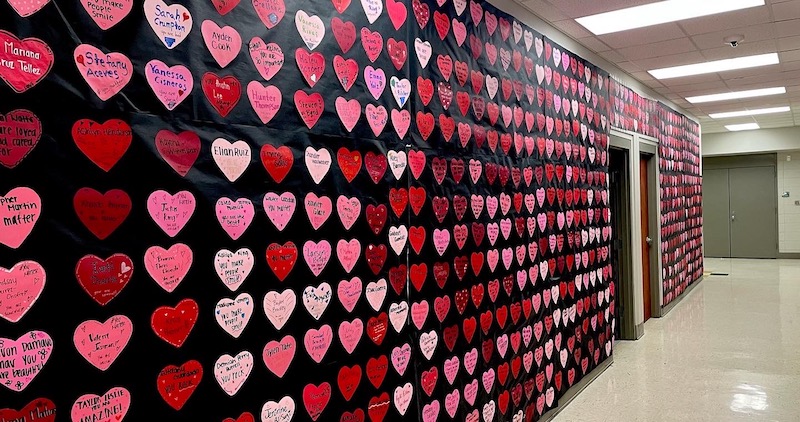 Pelham High School students were more than excited at the return of the #YouMatter movement. The movement involves members of Pelham's United Club passing out handmade valentines to every student in the school with positive affirmations written on them. (Contributed)

PELHAM – On Monday, Feb. 14, the students of Pelham High School received something a little more special than your typical Valentine’s card.

The Pelham United Club reconvened their annual #YouMatter Day where every student in the school receives a handmade paper heart with positive words of affirmation and motivation written on the back.

Juan Vasquez, a teacher sponsor for the Pelham United Club, said the movement is beloved by all the students.

“This is our big project for the second half of the semester, and it’s really important to the kids,” he said. “They want to work on this project in particular, and I think that’s why they sign up for the club.”

The club started the tradition in 2018. The club members spend a good amount of January cutting out hearts – each one individually cut and traced. They put the name of every student in the school on the back of the heart and put a positive message on the other side, something that tells them that they matter and what their value is.

“This is the first time in two years we’ve been able to do it due to COVID, and this year the response was so huge from all the kids,” Vasquez said.

The #YouMatter movement began as anti-suicidal movement that encourages people to reach out to those around them to remind them that they are important. To Vasquez, who is a veteran, this movement is incredibly important as he’s lost people in his life to suicide.

“It’s sad because all they needed was for somebody to tell them that they mattered,” Vasquez said. “And maybe they reached out without us knowing, but you know, in the end the families are the ones who suffer the most.”

In total, the club gives out approximately 1,050 cards.

“We start in January, and it takes the entire month to get them all done,” he said. “The students will either come early before school or stay after school to do all the tracing and cutting. It takes a lot of time.”

The rising cases of mental health issues in adolescents is cause of concern for educators, as many teenagers have reported more feelings of helplessness and depression due to world issues piled onto their everyday high school lives.

Vasquez said seeing the smiles on students’ faces when they receive their heart is proof enough that the #YouMatter movement is more than valid. He added that the heart they receive on that day may be the only time a student hears a positive affirmation from someone in their life.

“To them [the students], high school is their world,” Vasquez said. “That isn’t the reality, you know that and I know that, but to them, this is where they spend their days and this is where they begin to learn who they are. It’s scary and frustrating and hearing someone say, ‘Hey, you do matter in this world,’ that could be everything to them.”

Vasquez said giving students that hope, even if for a moment, means everything to him and the other club members, and they’re more than happy to bring the tradition back after its pandemic hiatus.

“There’s always light at the end of the darkness,” he said.