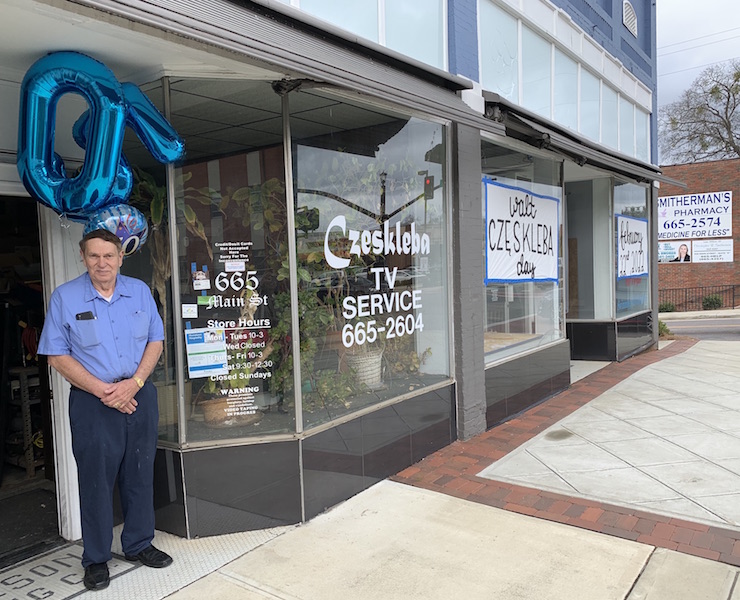 Walt Czeskleba stands outside of his shop, Czeskleba TV Service, on his 50th anniversary in business on Tuesday, Feb. 22. (Reporter Photo/Emily Sparacino)

“When I first opened, there were six other TV repair shops in town,” Czeskleba said. “I was No. 7.”

Five decades later, Czeskleba finds himself with little competition—and the same appreciation he had for his job when he started many years ago.

“Fifty years is a long time,” Czeskleba said on Tuesday, Feb. 22, which the Montevallo City Council declared as “Walt Czeskleba Day” in honor of his 50th anniversary in business. “I enjoy what I do. You have to enjoy your work.”

Czeskleba graduated from Montevallo High School in 1968, and attended electronics school in Birmingham and vocational school in Childersburg for two years.

He worked at a TV shop in Alabaster while attending school, and after completing school, he opened Czeskleba TV Service in Montevallo on Feb. 22, 1972.

The business was initially located in a small storefront on North Boundary Street and soon moved to a storefront on Middle Street.

Czeskleba relocated the shop to its current location at 66 Main Street in 1975.

In addition to TV repair, Czeskleba works on antique clocks and swimming pool pumps and filters in the spring and summer.

He said the challenges of the job keep his mind sharp.

“Just having a job is nice,” Czeskleba said. “I’ve enjoyed every minute of it.”