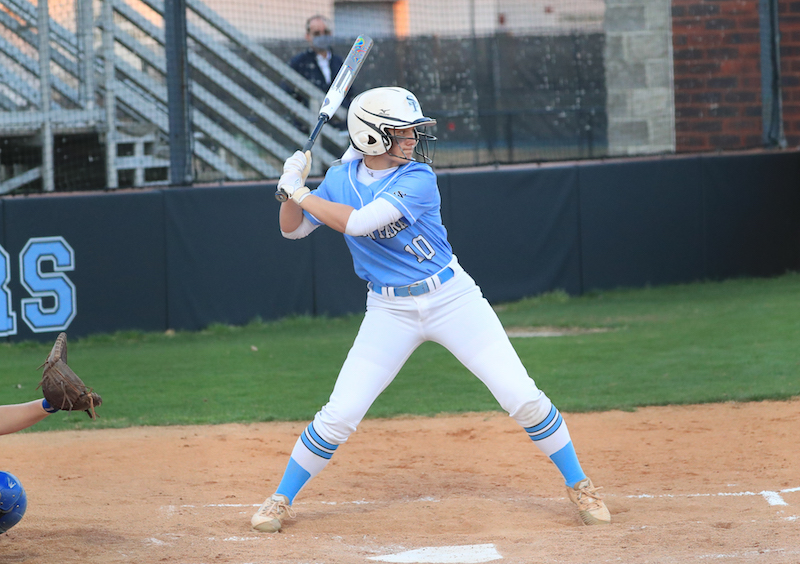 LEEDS – The Spain Park Jaguars bounced back from their first loss of the 2022 season with a dominant effort at the Leeds Greenwave Classic Feb. 25-26.

Spain Park swept through the tournament with five consecutive wins to take home the championship, giving up three combined runs in that stretch and posting three shutouts.

In the opening game of the tournament, Spain Park’s offense was on full display.

Taking on Pinson Valley, the Jaguars put together a 12-0 shutout that saw them outhit the Indians 7-0.

Spain Park scored four in the first, seven in the second and one in the third to complete the quick victory.

Emma Hawkins led the Jags at the plate with a 2-for-2 performance with two RBIs and two runs scored. Katie Flannery and Blakley Watts each added one hit and two RBIs, while Emma Jolley and Maggie Daniel each had a hit and an RBI.

Beyond that, Caroline Whisenhunt and Charlee Bennett had one RBI each, while Morgan Jolley had one hit.

In addition to the strong hitting, the Jags got a combined no-hitter from Katherine Brown and Reagan Stewart in the circle.

Brown tossed two perfect innings, allowing no hits, runs or walks, while Stewart pitched one inning and struck out one with one walk, no runs and no hits.

The bats weren’t as hot in the second game of the tournament against Corner, but despite being outhit 4-1, the Jaguars were able to grab a 5-0 shutout win.

The lone hit came from Watts, who had a two-RBI triple, while Daniel also had two RBIs with a ground out and sac fly.

Ella Reed led Spain Park in the circle with five strikeouts and only one hit in three innings to grab the win.

Spain Park gave up the first run of the tournament in the next game against St. Clair County, falling behind 1-0 after the top of the second.

The Jags, however, quickly responded with a run in the bottom of the second and then put the game away an inning later with a three-run third to pick up a 4-1 win.

Again, they were outhit, this time 4-2, but that didn’t prevent the win.

Hawkins finished 1-for-1 with an RBI, a run scored and a walk, while Watts added an RBI on one walk. Emma Jolley also added a hit and an RBI with one run scored, while Whisenhunt finished with one RBI.

Brown got the win in the circle, allowing one run on four hits and striking out one.

That led the Jags to the semifinals against county foe Chelsea, which set up their most thrilling game of the tournament.

Chelsea struck first in the top of the first with one run to grab the early lead, but Spain Park answered back in the bottom of the second.

Following two scoreless innings in a row, the Hornets then broke the tie in the top of the fifth, which started extra innings. That gave them a 2-1 lead.

The Jags, however, got another crack at the plate in the home half of the fifth and took advantage.

With Bennett placed on second base to start the inning, Whisenhunt quickly tied the game with an RBI single.

Reed then stepped up with a single that moved pinch runner Tatum Lassiter to third, before an error eventually brought her home for the game-winning run.

Bennett and Whisenhunt each had a hit and RBI in the win for Spain Park, while Jolley and Reed each finished with one hit.

Reed also performed well in the circle, holding off the Hornets for the win. She went all five innings and allowed two runs on four hits with four strikeouts.

That earned the Jags a spot in the championship game, and they seemingly saved one of their best performances for last.

Reed got the start in the circle once again, and her flawless effort kept the Yellow Jackets at bay throughout.

She tossed a complete-game shutout, striking out 10 and allowing three hits to help lead the Jaguars to a 4-0 victory.

Run support came thanks to Hawkins, Emma Jolley and Maggie Daniel. Hawkins finished 2-for-4 with an RBI, while Daniel and Jolley each had one hit and one RBI. Flannery also had multiple hits with two, while Morgan Jolley finished with one hit.