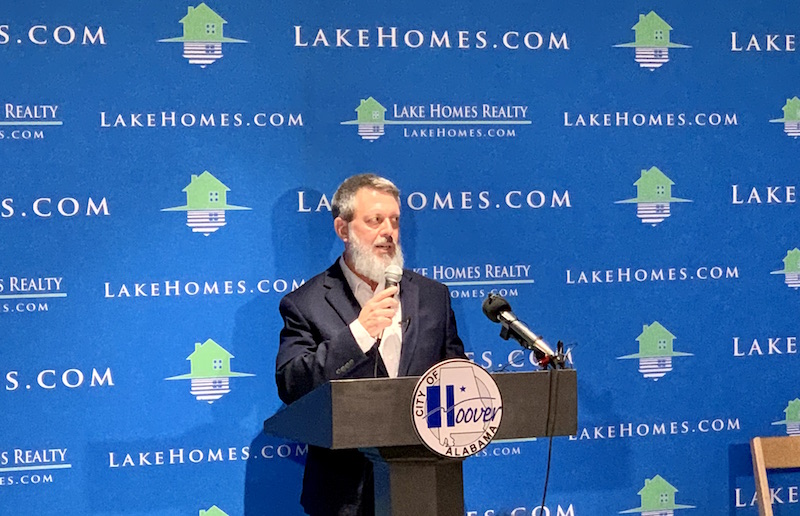 HOOVER – Two technology-based companies have announced their plans to expand services and move their corporate headquarters to an office building in Shelby County’s Meadowbrook area off U.S. 280.

Lake Homes Realty and RealSource Title Insurance and Real Estate Closing will operate from 500 Corporate Parkway after renovations to the fourth and fifth floors of the building are complete.

“We believe that, together, Lake Homes Realty and RealSource will have at least a $500,000 Hoover impact over the next five years,” Lake Homes Realty CEO Glenn Phillips said at a media conference on Monday, Feb. 21. “We’re creating 400 jobs, at least 300 of those here. We will be investing over $1 million just in the office space buildout and infrastructure.”

RealSource operates in 12 states with plans to add more in the near future.

Hoover has been the companies’ corporate home for the past four years, and the expansion to Meadowbrook solidifies their plans to remain Hoover-based as they serve clients across the country.

Also present at the media conference were Doris Phillips, COO of Lake Homes Realty and president of RealSource LLC, and the office building’s owner, Steve Martin, managing principal of SDM Partners in Atlanta.

On Feb. 7, the Hoover City Council approved tax abatements for the companies’ expansion.

“We just think the opportunity here is ripe for growth,” Phillips said during the City Council meeting. “We think that the jobs we create will not only bring people here, but the reinvestment.”

The abatements will allow for the retention of more than 50 jobs and the creation of nearly 300 new jobs over the next several years.

In addition, the project represents nearly $1 million in new capital investment and adds to the cluster of technology-based companies located in Hoover along the U.S. 280 corridor.

“Their average wage would be over $52,000 a year and would include positions in management, customer service, marketing, technology, finance and other similar operations,” Greg Knighton, Hoover’s economic development manager, said. “Based on our impact analysis done here in the city, we believe that from property taxes, building permits fees and indirect sales taxes spent in the city, that Lakes Homes expansion would benefit the city by over $500,000 over the next 10 years, and the impact to Hoover City Schools from property taxes would be over $200,000 over the next 10 years.”

Beginning in 2016, Hoover Mayor Frank Brocato said he and the City Council placed emphasis on growing the city’s base of technology companies and jobs through its economic development and planning efforts.

“We’re here today to celebrate another success for Hoover through the growth of one of its corporate citizens,” Brocato said. “I’m pleased to start 2022 with a strong announcement from Lake Homes Realty and RealSource as they retain and create hundreds of knowledge-based jobs for the residents of Hoover and the surrounding area.”

The total estimated value of all abatements (non-educational city, county and state taxes) to Lake Homes Realty is $102,645.