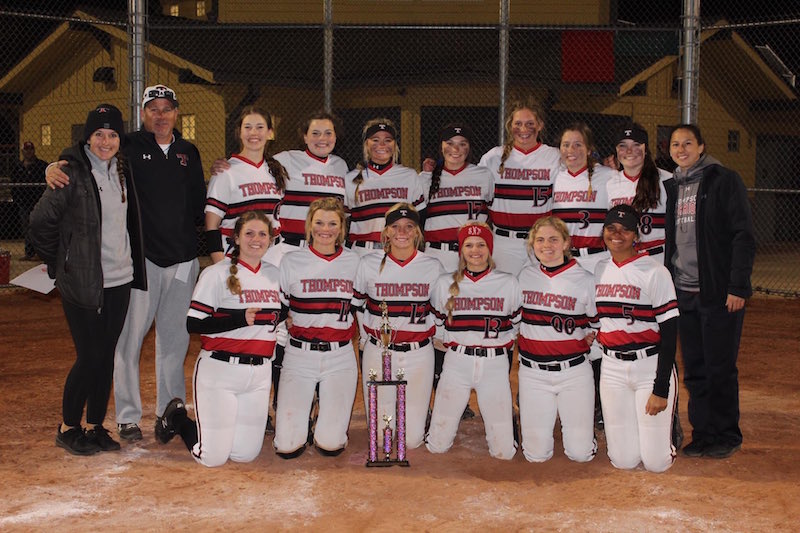 Thompson’s softball team put together another big weekend at the Patriot Classic to finish as tournament champions and improve to 10-1 on the season. (Contributed)

TUSCALOOSA – The Thompson Warriors are making a statement early in the 2022 softball season.

Fresh off last year’s state tournament appearance, the Warriors have sprinted out to a 10-1 start to the new season that included a 3-1 opening weekend followed by a 3-0 shutout against Spain Park on Thursday, Feb. 24.

That led a confident group into the Hillcrest-Tuscaloosa tournament Feb. 25-26, and all the Warriors did to follow up the 4-1 start was go 6-0 at the tournament to claim the championship.

Thompson took down Hatton, Holy Spirit (twice), Vestavia Hills, Pell City and Alexandria en route to the championship, while the Warriors grabbed shutouts in five of those six wins.

In the opening game against Hatton, Thompson followed two scoreless innings with a three-run third to make the difference in a 3-0 shutout victory.

Holly Selman got the complete-game win in the circle, allowing three hits and no runs with three strikeouts.

Later that night, Thompson came right back with another shutout victory in the first of two wins against Holy Spirit.

The Warriors struck first in the top of the second with another three-run inning to take a 3-0 lead behind a two-RBI double from Kendall Chanell and an RBI triple from Motes.

They then added one more in the top of the third for a 4-0 lead, which was more than enough cushion for Kadyn Bush and DeBlock in the circle.

At the plate, Chanell finished 1-for-1 with two RBIs, while Motes went 2-for-2 with one RBI and a run scored. Chalea Clemmons also added one hit.

The Warriors came back the next morning to kick off the elimination portion of the bracket and got a rematch with Holy Spirit.

Thompson gave up its only runs of the tournament in the game, but 11 runs from the Warriors negated that.

Holy Spirit scored three in the bottom half of the third to answer, but that was as close as the Saints got.

Thompson posted two more in the fourth to create the final score of 11-3, as the Warriors outhit the Saints 14-2 in the win.

Jenna Williams, Clemmons and Chanell each had two hits in the win, while Williams led the team with a game-high three RBIs. Clemmons and Channell had two RBIs each, while Savannah Nabors finished with a hit and two RBIs.

That led into a hard-fought battle with Vestavia Hills, as pitching became key the rest of the tournament.

Following three scoreless innings from the Rebels, Thompson struck in the bottom of the third with two RBI singles.

Motes kicked it off with a one-out double, which was followed by an RBI single from Jenna Williams. After a second out was recorded, Laney Williams then added a second RBI single for a 2-0 lead through three.

The Rebels added one base runner over the final two innings, as Thompson closed out the victory.

Clemmons got the win with an impressive outing in the circle, allowing one hit and striking out nine in the complete-game shutout.

Motes, Pate, Jenna Williams, Laney Williams and DeBlock each had one hit in the win.

With that, Thompson advanced to the semifinal game against Pell City where the Warriors gradually pulled away for a 3-0 win.

In a game that featured five combined hits, Thompson scored one run each in the second, third and fourth innings to notch 3-0 shutout.

Laney Williams finished 1-for-1 with an RBI and run scored, while DeBlock and Motes each had one RBI. Tindell and Clemmons added the only other hits for the Warriors.

In the circle, Thompson got another strong outing from DeBlock, who struck out two and allowed no runs on two hits and one walk.

Now in the championship game against Alexandria, Thompson relied on what had worked all tournament—strong pitching and a big offensive stretch.

The Warriors were able to play from in front early after an RBI bunt from Laney Williams put them on top 1-0.

After a scoreless second inning, Thompson loaded the bases in the third.

With two outs, DeBlock drew a walk to bring home a run. Then, Chanell and Tindell followed with back-to-back singles for three more combined runs and a 5-0 lead.

That was again more than enough with Clemmons on a roll in the circle.

She finished the complete-game shutout by striking out six and allowing four hits.

Laney Williams and Tindell each went 2-for-2 with an RBI, while Chanell had one hit and two RBIs. Motes, Jenna Williams and Pate each finished off the tournament with one hit in the win.