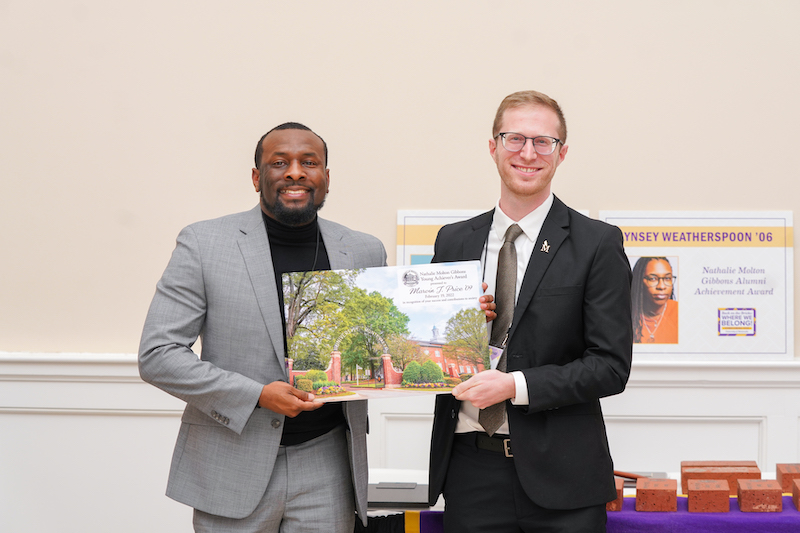 The award is given annually to an alum age 35 or younger whose career and community contributions have reflected positively at the local, state or national level.

“He is a natural and tenacious leader who has an internal drive to be successful but is also conscientious enough to do it in a way that helps build people and communities,” said Christian Sanders, a 2015 UM graduate.

Price, a Birmingham native, is the executive vice president of economic development at the Greensboro Chamber of Commerce. While serving in that role, Price has worked with corporate executives, site selectors and real estate developers to close deals on projects with many notable companies.

“It’s not lost on me that I’m one of the first men of color to receive this award, and that’s because the University of Montevallo has instilled something in me, it’s because they believe in diversity, equity and inclusion,” Price said. “And I truly believe that if we’re going to change things in society, Montevallo is one of the key institutions that will do so.”

Previously, Price served as vice president of economic recruitment for the Charlotte Regional Business Alliance, representing the 15-county bi-state region. Prior to that he managed business development for Spire, the fifth-largest natural gas utility in the U.S. and was project manager for the Birmingham Business Alliance, where he helped bring in more than $250 million in capital investment and create more than 2,000 jobs.

He also volunteered as president of the Urban League of Central Carolinas from 2018 to 2021.

Price is the recipient of many industry and professional awards, including the 2018 and 2020 Consultant Connect Top 50 Economic Developers Award, was recognized as a 2019 and 2021 DCI 40 Under 40 in Economic Development and was named to the inaugural class of the University of Montevallo 15 Within 15.