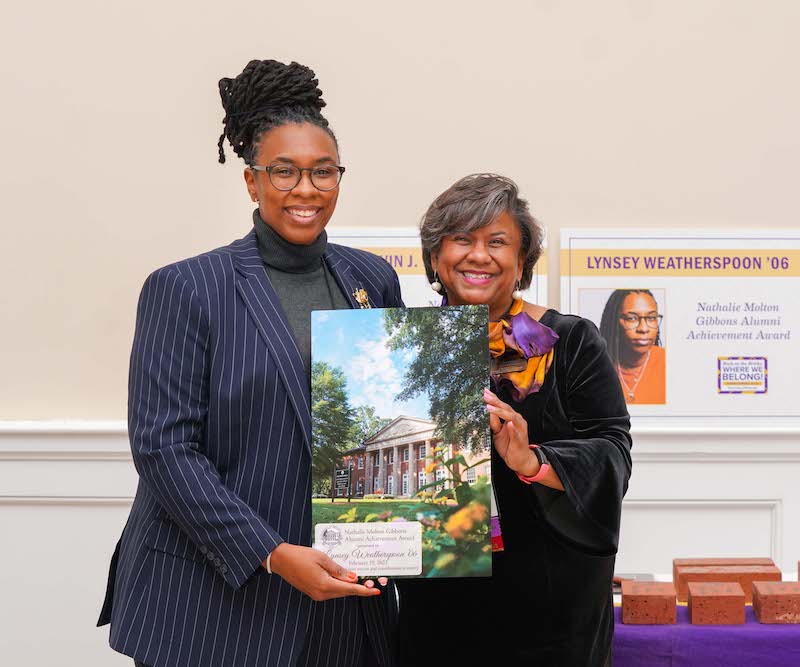 MONTEVALLO – If a picture is worth a thousand words, then the profound and historic work of freelance photographer Lynsey Weatherspoon could fill a library.

Weatherspoon, a 2006 University of Montevallo graduate and McNair Scholar, was selected as the recipient of the 2022 Nathalie Molton Gibbons Alumni Achievement Award by the UM National Alumni Association (UMNAA) at its homecoming awards luncheon at Anna Irvin Dining Hall on Saturday.

The award recognizes an alum age 35 or older whose contributions through career or community service, reflect positively on society at the local, state or national level.

The Birmingham native’s documentary portrait photography has allowed her to make portraits of the last surviving members of the Negro Baseball League; the unique culture of the Gullah Geechee people who reside on the sea islands and coasts of North Carolina, South Carolina, Georgia and Florida; the eruption of protests in Atlanta following the death of George Floyd; and so many other moments in the lives of Americans, particularly those in Birmingham and Atlanta where she’s based.

Weatherspoon’s work has been exhibited at The African American Museum in Philadelphia, Photoville NYC, and has been featured in prominent publications such as The New York Times, National Geographic, TIME, USA Today, ESPN, The Washington Post and MGM.

“Later on in my life, I realized that Montevallo was my security blanket,” Weatherspoon said. “It really just made me feel safe and at home.”

“There was nothing that I didn’t believe that I couldn’t do because Montevallo made me believe that everything and anything was possible.”

Some of her awards include being a 2021 American Photography 37 award winner, a recipient of the 2021 National Geographic Society Grant, being named a 2020 Canon Explorers of Light, taking part in the 2019 New York Times Portfolio Review, named to the inaugural class of 15 Within 15 and making the 2018 The Lit List.