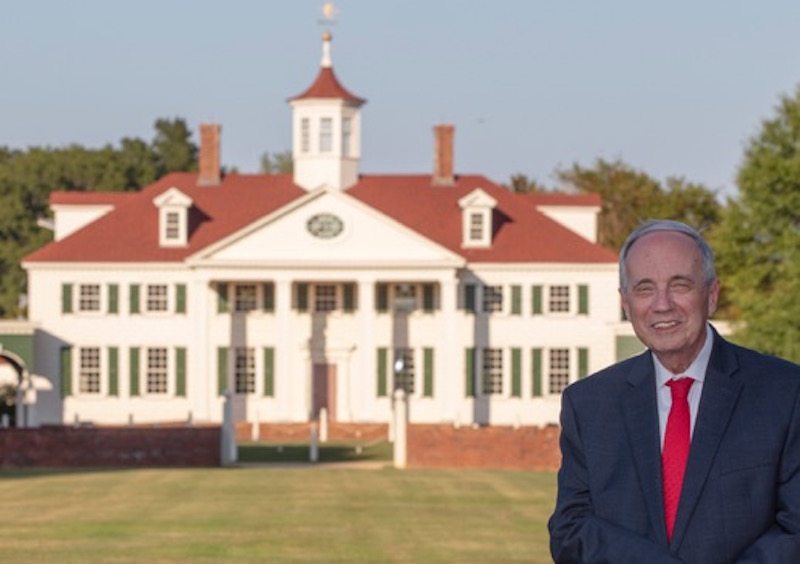 American Village founder Tom Walker has retired as president and transitioned to the role of president emeritus on March 1. (Contributed)

MONTEVALLO – American Village founder Tom Walker has announced his decision to retire as president and transition to president emeritus.

“After much prayer and conversations with my family, I have decided that the time has come for me to retire from my position as American Village President, effective Feb. 28, 2022,” Walker wrote in a press release. “I am both honored and happy that the Board of Trustees of the American Village voted for me to serve in a part-time position as founder and president emeritus. I will continue to have an office at the Village and will focus on a few priorities, including completion of Independence Hall. I will begin that part-time service on April 1.”

Walker said it was a difficult decision to retire from fulltime leadership of the American Village, a place he had the idea of establishing as an American history and civics educational campus to inspire and prepare young people for their roles as good citizens and leaders.

Walker led efforts to build the 188-acre campus in Montevallo, and to design and implement its widely-acclaimed and engaging history and civics programs.

The campus has served more than 750,000 students from Shelby County and throughout the southeastern United States since its opening in 1999, and it also draws thousands of public visitors each year.

“For almost 35 years I have devoted my passion and energy in founding, building and growing the American Village,” Walker wrote. “I will forever be grateful for the incredible work the American Village has done to educate and inspire almost a million students as well as adult citizens to know and cherish our nation’s founding principles. That work and success would not be possible without the extraordinary help of many friends and supporters.”

A search process for the American Village’s next president and chief executive officer will begin immediately, according to the release.

“I am excited to see the enormous talent this search will undoubtedly identify, and I am confident that the right candidate will be chosen by the Board to carry on the American Village’s important mission,” Walker wrote.

In 2017, Walker was one of only 16 citizens appointed by Congressional leaders to the United States Semiquincentennial Commission, which is responsible for leading the nation’s 250th birthday celebration and commemoration of American Independence in 2026.

Walker was unanimously elected as vice chairman of the national commission at its first meeting in Philadelphia.

The American Village has celebrated many milestones since its opening, including the grand opening of the West Wing of Independence Hall in November 2021, representing the first phase of a project to construct a complete replica of Independence Hall before the 250th birthday of the United States of America on July 4, 2026.

Independence Hall joins more than 20 buildings on the American Village’s campus, including replicas of the president’s Oval Office and the East Room of the White House; a colonial chapel reminiscent of Bruton Parish Church of Williamsburg; Concord Bridge, which spans a one-and-a-half-acre lake; and the National Veterans Shrine, patterned after Philadelphia’s Carpenters Hall.

“The work of this incredible institution is more important now than ever before, and it must expand the reach and depth of our educational programs,” Walker wrote. “As I have said before, young people cannot protect our American legacy of liberty and constitutional self-government unless they cherish it. And they cannot cherish what they do not know. We must build good citizens and leaders who will cherish these ideals, and thereby learn to love our country. I look forward to continuing an important role in this work, and I hope you will join me in continuing to support it.”

Walker transitioned to the role of president emeritus on March 1, 2022.