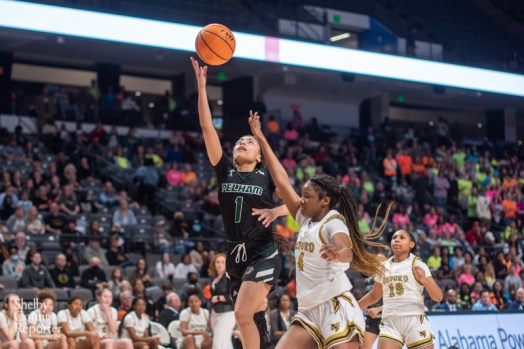 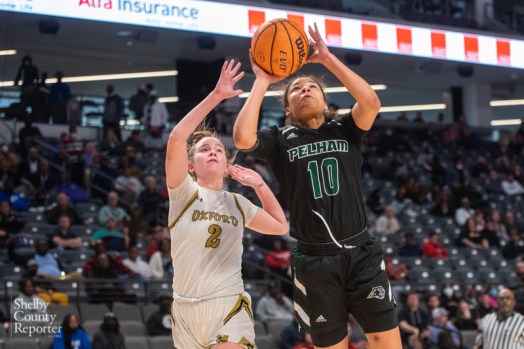 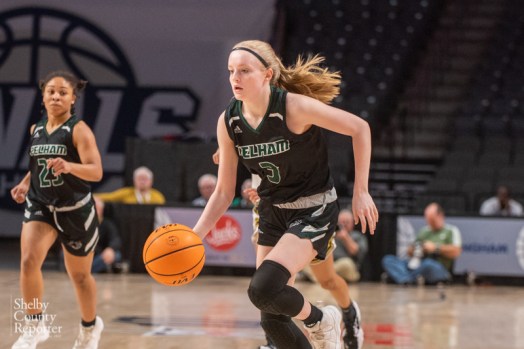 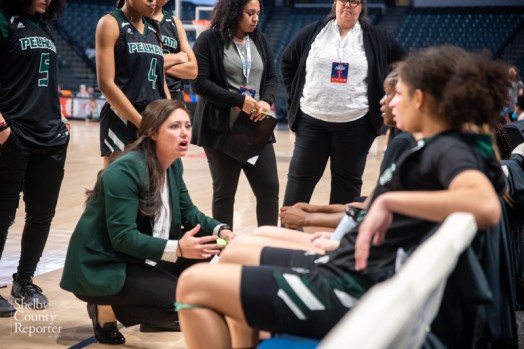 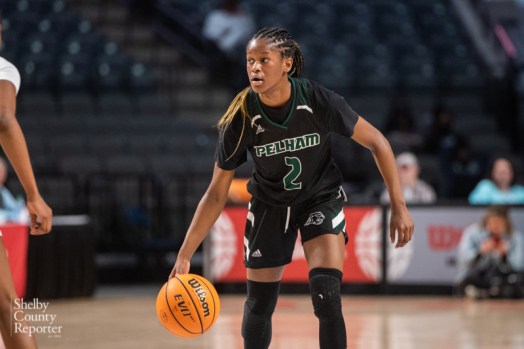 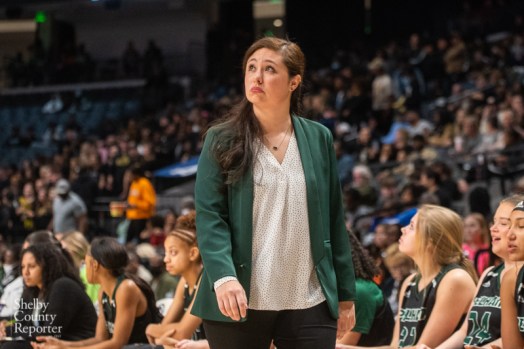 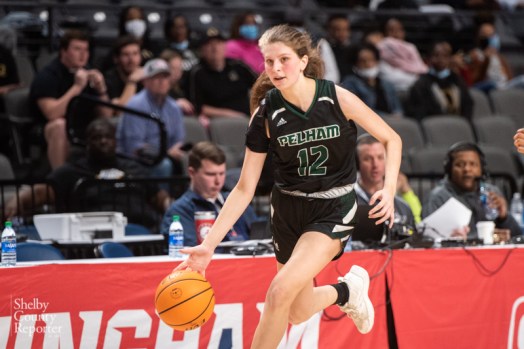 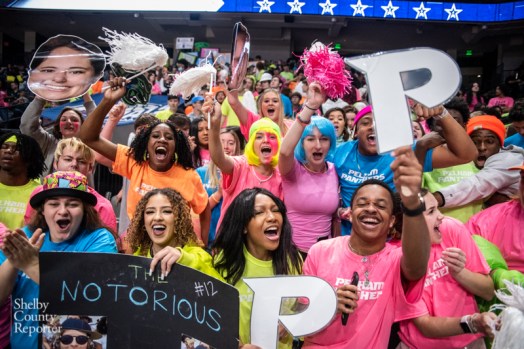 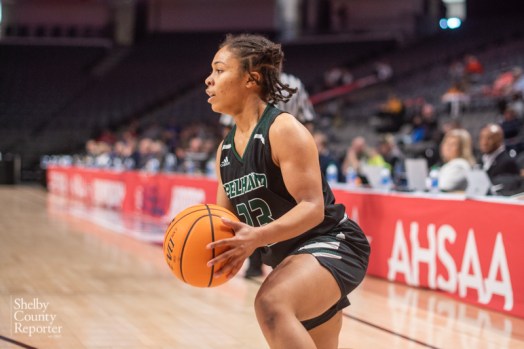 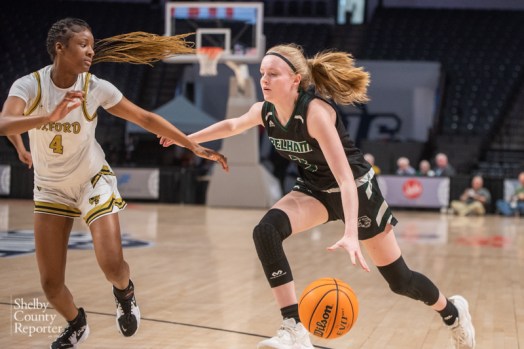 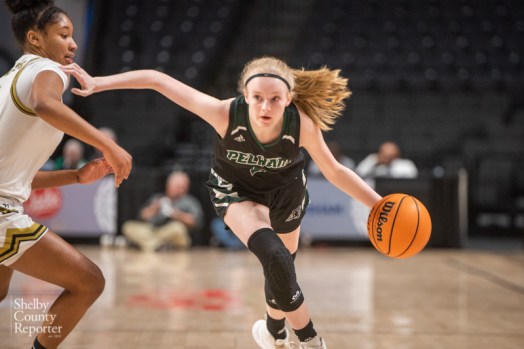 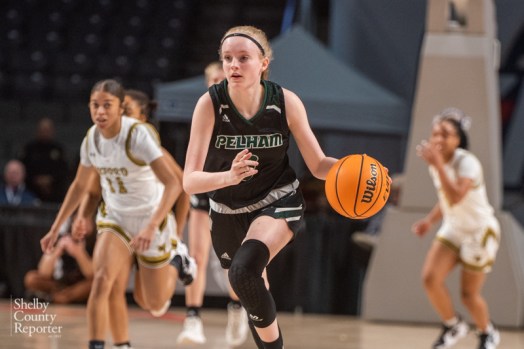 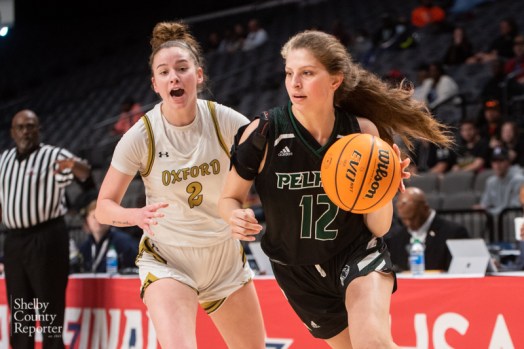 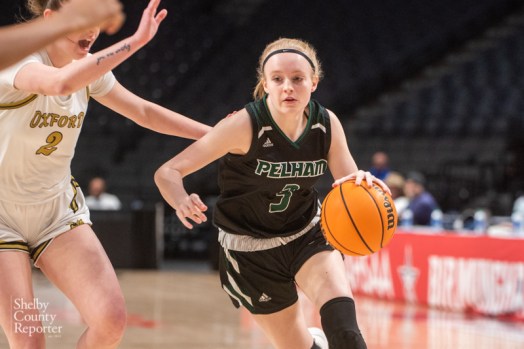 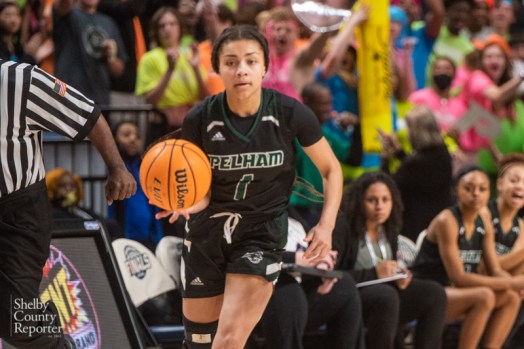 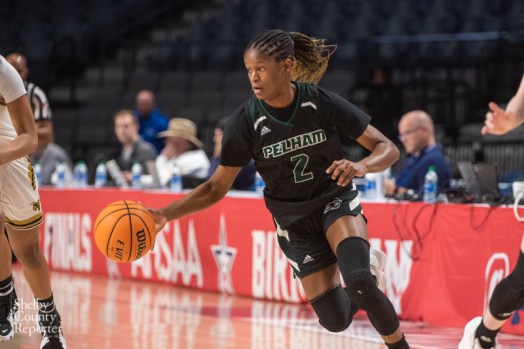 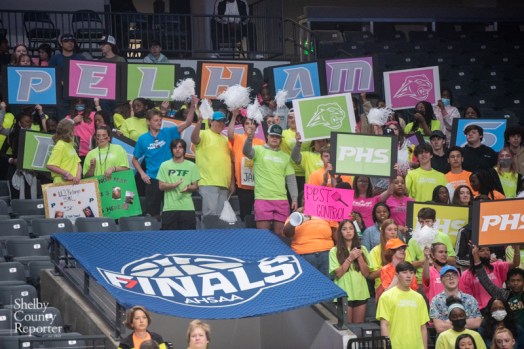 BIRMINGHAM – As they fell to the floor heartbroken inside Legacy Arena after a comeback attempt in a 70-67 loss to the Oxford Yellow Jackets on Wednesday, March 2, the season flashed before the eyes of the Pelham girls basketball players.

But they didn’t stay down for long. As soon as they realized the tenacity by which they had finished their historic first Final Four game in school history, the Panthers quickly bounced back to their feet and comforted one another in front of a raucous crowd chanting in support.

“That was a tough one. With four minutes left in the fourth quarter, I thought it could get ugly,” Pelham head coach Crosby Morrison said. “But this group just showed the character they’ve had, really for the four years I’ve had them. It just shows the character and heart they’ve had for all four years, which is the reason they are here and playing in this type of game. They had character as freshmen, heart as freshmen and grit as freshmen. They have done so much for this program and this staff for four years. I’m just so proud of them.”

That’s when they got together and made a choice. A group that had been under Morrison all four years at Pelham, they decided not to give up.

“That was a lot of seniors on the floor,” Morrison said. “We just basically told them, ‘This is it. Leave everything you have.’ And I truly felt like they did. They left everything they had. They sold out for every loose ball, and every 50-50 ball, they came up with it. We were playing to win at the end, and I kind of felt like they were playing to not lose, so we just tried to capitalize on that.”

The Panthers went on a quick 8-0 run in less than a minute to trim the deficit to 11 points and force an Oxford timeout with 2:10 left.

“We just talked about how we didn’t have anything to lose,” junior guard Laci Gogan said. “Even if you somehow got hurt after diving after balls, it didn’t really matter because we wouldn’t have another game if we lost anyways.”

That attitude continued to create havoc for Oxford, who was trying to preserve the win.

Pelham got to within 10 points three different times over the next few possessions, as the two teams traded baskets and free throws.

Down 67-57 with 42 seconds left, that’s when the constant effort finally paid off.

Pelham got a quick basket from Jaslyn Heflin, which was followed by consecutive turnovers under the Panthers’ basket rom the Yellow Jackets that led to layups for Myriah Tate and Gogan.

All of a sudden, Pelham had cut the deficit to four points with 21 seconds to play.

Oxford then hit two free throws to make it a six-point game again, but the Panthers followed with a chaotic stretch.

Following a 1-2 mark at the free throw line for Tate, the Panthers got two offensive rebounds in a row that eventually ended with Victoria West draining a 3-pointer with four seconds to play.

That cut the deficit to two points at 69-67, but time wasn’t on Pelham’s side.

The Panthers were able to foul to force Oxford to the line with 0.7 seconds to play.

The Jackets missed one and made the second, but there wasn’t enough time for Pelham to get off another shot on the ensuing inbound, leading to the tight three-point loss.

And that never-give-up attitude is something Morrison said made her most proud of this team and the first group of seniors she has coached all the way through at Pelham.

“They had us frazzled, but we responded in the third quarter, and we scored 27 points in the fourth quarter,” Morrison said, looking at her players with a nod of respect as she talked. “That’s just because they refused to quit, they refused to lose. I have such a great group of kids. I’m not only going to miss coaching them in basketball, but just being around them because they’re just such a good group to be around.”

With the loss, a historic season ended in difficult fashion, but the team’s fight was never in question with starting guard Karma Wynn out of the lineup and Savannah Scarbrough playing through a torn PCL.

“Savannah tore her PCL three weeks ago,” Morrison said. “When she went down in practice, we all looked at each other like, ‘That’s it, she’s done.’ She has really rehabbed so hard. She has refused to not practice. She wanted to be back for her team. It just speaks to the character of kids and the culture that we’ve created in that she wanted to be back on the court for her teammates.”

And that effort was part of what created a game of runs, as both teams answered one another throughout the matchup.

The Panthers were able to claim the early lead after back-to-back 3-pointers from Gogan and West put them in front 6-5.

But they struggled to guard the three-point line on the other end of the floor in the first half.

Oxford responded with three in a row from beyond the arc for a 9-0 run and eventually took a 19-8 lead after making five from three in the first six minutes of the opening quarter.

Pelham, however, answered the bell defensively and started running faster to the basketball, which led to several turnovers from the Yellow Jackets and no easy looks from three.

The Panthers capitalized on the shift in defensive play by ending the opening quarter on a 6-0 run thanks to five from Gogan and one from West.

That cut the deficit to five points going to the second quarter, and it didn’t take long to inch closer.

Two straight baskets from Scarbrough cut the deficit to one point at 19-18 early in the quarter for a 10-0 run.

But in a game of runs, Oxford brought a halt to the run with an and-1 that sparked an 8-0 run to go back up by nine.

Pelham came back with another quick 6-0 run to get within three, but Oxford put together a strong close to the half with a 13-6 run.

The Jackets shot 7-12 from beyond the arc and 9-9 from the free throw line in the opening half to take a 40-30 lead into the break.

Early in the third quarter, Oxford started to create separation, eventually extending the lead to 19 points for the first time at 53-34.

The Yellow Jackets, however, missed their first free throw of the game with 34.3 to play in the quarter, while the Panthers got back-to-back layups from Heflin and a layup from West to draw within 14 going to the final quarter.

The Panthers then hit the first two shots of the final quarter to cut the deficit to nine points, but the next 1:07 of the game saw Oxford put together a 10-0 run to go up by 19.

That stretch became the key difference maker late, as Pelham’s fight back started right after.

Even with the loss, Pelham’s players were proud of the comeback effort, while the seniors were elated at what they had done for the program.

And it led to a historic season for seven seniors and a new standard for everyone else.

“We set a bar, a legacy for Pelham High School,” Scarbrough said. “It’s a legacy a lot of people probably didn’t think we could reach, but we did. We proved a lot, and I mean a lot of people wrong. It’s also motivation for underclassmen. We still have that family bond.”

Scarbrough and West led Pelham with 17 points each, while Gogan finished one behind with 16. Heflin finished one point shy of double figures with nine for the Panthers.