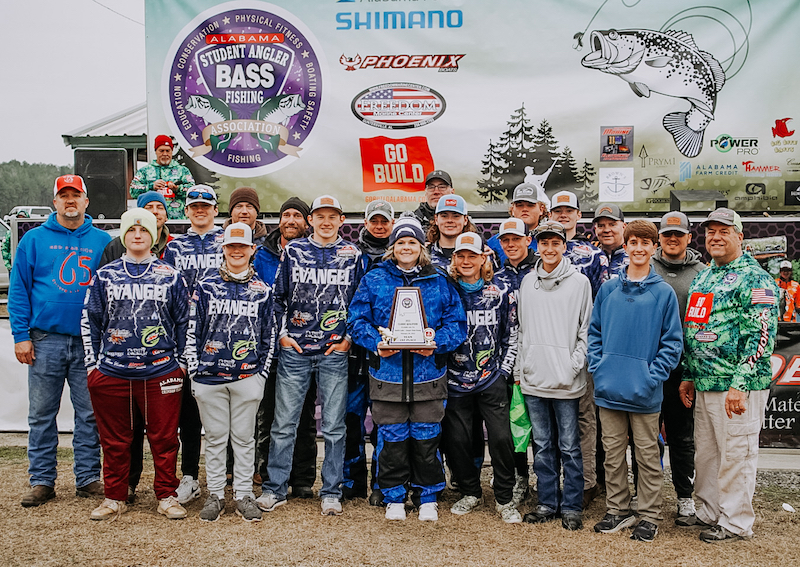 The Evangel Lightning Bass Fishing Team placed first in the 4A to 7A category in the ASABFA Qualifier tournament held on Smith Lake on Saturday, Feb. 26. (Contributed)

Twelve of the team’s 18 anglers participated in the tournament, and three duos placed in the top 15 out of 180 boats with Ellis Nichols and Cameron Washburn placing 11th, Kade Crowson and Skipper Stallings placing 13th, and Thomas Turnbull and Hugh Bates taking 14th place.

The overall win took place in the 4A to 7A category.

“It was outstanding. It was a good day,” said team sponsor Keri Stallings. “The competition is always heavy, because we’re up against schools that are three, four and five times larger than we are. I think it speaks volumes about each angler and what they’re doing and who they are fishing for.”

The other anglers who competed on Smith Lake were Drew Turnbull, Nathan Lisky, Brayden Rives, Simon Stafford, Caleb Miller and Connor Miller. There were two anglers and a captain on each boat.

Stallings said that just two weeks earlier, the team finished third overall in the 4A to 7A category at another ASABFA tournament on Lake Martin. In addition, a team of two girls, Mia Kendrick and Taylor Grace Kyatt, competed on Lake Guntersville.

Needless to say, Stallings is thrilled with the growth of the young program from just four anglers in the beginning to the current count of 18.

“We were very, very excited to see the growth and the interest in the program,” she said. “Literally within the first year we quadrupled in size, and we are very excited about the momentum we have going into next year.”

For those who regularly compete, bass fishing requires a significant amount of preparation. Knowing what to expect going into a tournament comes down to a science—conditions are affected by the weather, the topography of the location and a host of other factors.

“I think the most challenging piece of bass fishing is all about mindsets. If you can maintain a positive mindset while you’re out there, you’re going to keep fishing and you’re going to keep plugging until the very last moment when you have to drive back for weigh-in,” Stallings said.

The team’s next tournament will be on the Airport Marine Trail on March 26 on Lake Neely Henry. Anyone who is interested in learning more about the program may visit Evangellightning.org/bass-fishing or email ecs.bassfishing@gmail.com.