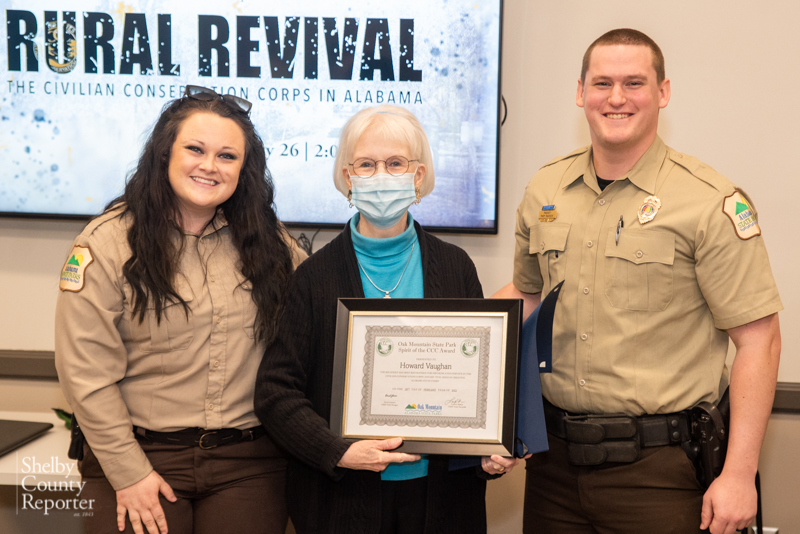 The Pelham Public Library hosted a special presentation on Saturday, Feb. 26 honoring the 80th anniversary of the end of the Civilian Conservation Corps and the organization’s role in bringing Oak Mountain State Park to fruition. Pictured are Alabama State Park naturalist Lauren Massey, Park Ranger Alex Massey and daughter of Howard Vaughn, one of the surviving members of the CCC. (Reporter Photo/Keith McCoy)

PELHAM – On Saturday afternoon, Feb. 26, the Pelham Public Library held a special presentation program commemorating the 80th anniversary of the end of the Civilian Conservation Corps (CCC) and its work bringing Pelham’s Oak Mountain State Park to life years ago.

The Civilian Conservation Corps (CCC) was a work relief program started by President Franklin D. Roosevelt that gave millions of young men employment on environmental projects during the Great Depression. The CCC ran from 1933 to 1942, and this year marks the 80th anniversary of the end of the CCC.

Considered by many to be one of the most successful of Roosevelt’s New Deal programs, the CCC planted more than 3.5 billion trees and constructed trails and shelters in more than 800 parks nationwide during its nine years of existence. The CCC helped to shape the modern national and state park systems thriving today, including Oak Mountain State Park.

“I want to thank everyone for coming out today,” said the library’s director Mary Campbell. “We are very excited to have this program today about the CCC and the work they did out at Oak Mountain State Park as well as the work they did for the state of Alabama.”

John Croom, teacher at Oak Mountain High School and expert on the CCC, gave the presentation going into detail on the CCC program and the development of OMSP.

“Roosevelt promised 250,000 young men meals, housing and uniforms – this was like his pet project,” Croom explained. “It was created by the Emergency Conservation Work Act and initiated 10 days after Roosevelt made a speech proposing the project.”

In order to enroll in the CCC, individuals had to be citizens of the United States, unemployed, have good character, be between 17-23 years of age, not married, out of school, and in physically and mentally fit shape to work. There was an enrollment period of six months, and members were given a total of $30, 25 of which was required to be sent home to the individuals’ families so they wouldn’t starve.

Croom recalled interviewing a surviving member of the CCC and the man saying though the amount may seem small by today’s standards, it was the difference between life and death back then.

“He was the oldest of ten in his family, and he joined the CCC so he could contribute and help feed his family,” he said. “I remember he got emotional, and it honestly makes me emotional to this day, that he said he knew if he wasn’t able to send that money home, his family would have starved to death. His mother was able to take that money and spread it out so his family could eat.”

Croom said from 1934 to 1941, the park saw improvements made by the CCC and also the Works Progress Administration.

“There were plans to make Oak Mountain a National Park, and they actually put it in the state agricultural map as a national park,” Croom said. “It never happened, though, because once World War II came along, young men were chosen to go to war and the CCC numbers started to evaporate quite quickly. By 1942, what happened was Congress had to defund the CCC because it couldn’t afford to fund the war and the CCC at the same time.”

Today in 2022, OMSP is over 11,000 acres, and remnants of the CCC-era like stone foundations, bridges and other infrastructures can still be seen throughout the park.

After the presentation, Representative Kenneth Paschal and Senator April Weaver presented a plaque to Howard Vaughn, a surviving member of the CCC. Vaughn’s daughter, Pam Penrod accepted the award on her father’s behalf due to his declining health.

“On behalf of Representative Paschal and myself, today we want to honor Mr. Howard Vaughn for his professional achievement,” said Weaver. “It is with great pride and special pleasure, today we honor Howard Vaughn for his many professional achievements. At the age of 18, Mr. Vaughn enrolled in the CCC to find a job. Initially he was assigned to a field crew for dam building work where his job was to hold a steel rod against a rock while another hit it with a hammer until a hole was big enough to stick a piece of dynamite in it. In January 1936 when field work resumed after rainy weather cleared, Mr. Vaughn was given the assignment of maintaining the tool room. His responsibilities included cleaning, repairing, replacing and inventorying the tools used in the field and maintaining an orderly and well-organized tool room. For his work he received a letter of commendation which he utilized when obtaining a job with the Birmingham Electric company.”

Vaughn’s daughter was then presented with a special recognition from Lauren Massey and Alex Massey, an Alabama State Park naturalist and park ranger, respectfully.

“On behalf of all of the state park system, specifically Oak Mountain, I would not be here doing my dream job and Alex doing his dream job if it weren’t for the CCC and the work your father did,” Lauren said. “We want to present him with the Spirit of the CCC Award, which is a state park wide award that we present to individuals who exhibit great leadership and conservation spirit for our state park system.”

The presentation concluded with a clip from an upcoming documentary film entitled “Rural Revival – The Civilian Conservation Corps in Alabama.” The clip was presented by the director and producer Tommy Wier, who interviewed Howard Vaughn for the film.

“I had a great interview with Mr. Vaughn, and it was so great to meet him and sit down to interview him back in September,” Wier said.

Wier got the idea to make the documentary 20 years ago, and he decided to go forth with the project due to curiosity about his own father’s experience in the CCC.

“He had a certificate that he graduated Junior High School while he was in the CCC, and he kept it in his office for many, many years,” he said. “I never really knew the story behind it until I asked him about it one day, and all he really said about it was, ‘Well, I got on this train and went all the way across the country, and all I remember is the hot biscuits and lemonade the cook made.’ That should give you some insight into these people were in really bad shape, and the CCC was responsible for getting so many of them into a better spot in life.”

The documentary is set to premiere in fall 2022 for public television.