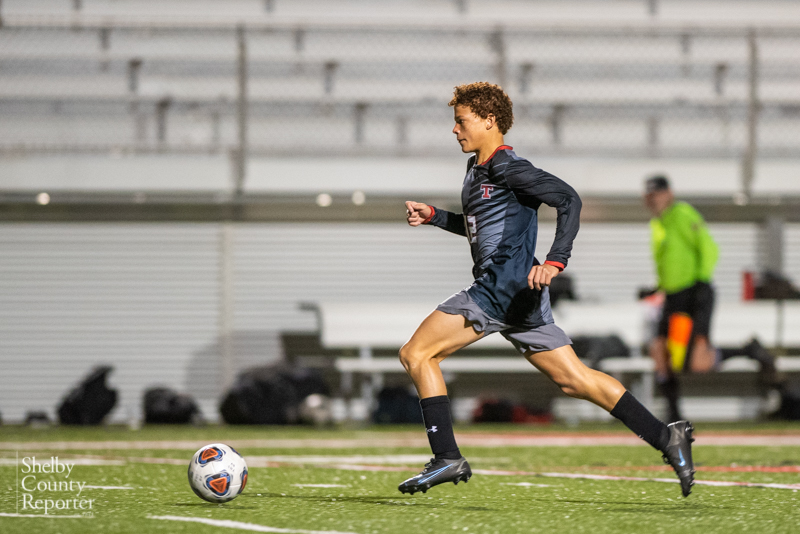 Thompson scored a final-minute goal against Chelsea on Wednesday, March 2, to take down the No. 3 Hornets 2-1. (Reporter photo/Keith McCoy)

CHELSEA – A night after taking down Hewitt-Trussville 5-1 to gain some confidence off back-to-back losses, the Thompson Warriors built off that with their most thrilling win of the young season.

In a knotted 1-1 game with Class 6A No. 3 Chelsea, who entered the match 7-1-1, the Warriors didn’t panic as time started to dwindle.

Instead, they were playing with an advantage thanks to being a man up, and they took advantage.

After Chelsea had gone on the attack for much of the second half, eventually leading to an equalizer and momentum in the final few minutes, Thompson was able to flip a switch.

The Warriors went from trying to prevent the game-tying goal to looking for a game-winner, and with about a minute to play, they found an opening up the left side of the field.

The ball eventually ended up in Daylen Worthy’s possession, and he didn’t hesitate, burying the game-winning shot into the back of the net for a 2-1 Thompson win.

It marked the close of an impressive second half for the Warriors, who took a 0-0 game in the first half and quickly gained an advantage with a goal early in the second half.

From there, the Warriors took advantage of their defense to try and finish off what was a stellar first half.

Chelsea, however, didn’t go down without a fight.

The Hornets hit the crossbar very shortly after falling behind, and they relentlessly put pressure on Thompson’s defense.

Later, a shot was saved by the Thompson keeper before a narrow offside penalty on Chelsea prevented an equalizer late in the half.

With 10 minutes left, however, the Hornets were able to capitalize on the constant pressure.

After earning a free kick, Luke Miller served the ball in, and it caused problems for the keeper, which allowed Grant Saether to score the game-tying goal.

But it didn’t take long for Thompson to come through with another answer to take the late lead and eventually earn the win.