Thompson wins 5 in a row in three-day stretch 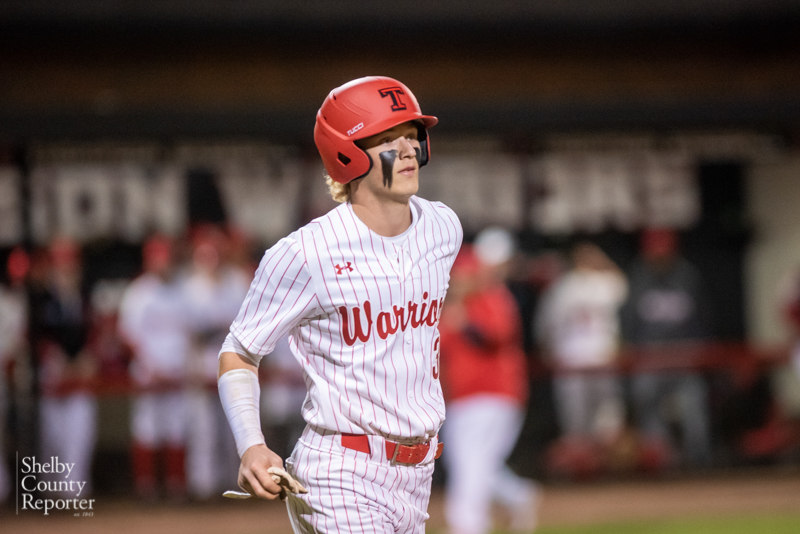 The Thompson Warriors scored 79 runs in five games over a three-day span to not only put together a five-game win streak but improve to 6-5 on the season. (Reporter photo/Keith McCoy)

ALABASTER – Following a 1-5 start to the season, the Thompson Warriors flipped the script in a three-day stretch that saw their offense explode to help play a role in a five-game win streak.

The Warriors scored 79 runs between Thursday, March 3, and Saturday, March 3 to pick up five consecutive wins and improve to 6-5 overall on the season.

The Warriors picked up doubleheader sweeps of Archbishop Hannan and Brookwood in back-to-back days before then taking down Hazel Green 14-10 to close out the busy stretch.

In the opening game of the Thursday doubleheader against Archbishop Hannan, the Warriors scored three runs in the first, four in the third, one in the fourth and four in the fifth to pick up a 12-1 victory.

Thompson outhit the visitors 11-3 in the victory, including a 3-for-3 showing from Ryan Walker. He also added two RBIs in the victory.

Gavin Chandler got the complete-game win on the mound, striking out six and allowing one run on three hits.

In the second game of the doubleheader, the Warriors quickly picked up where they left off at the plate, scoring 17 first-inning runs.

That helped them wipe away a 2-0 deficit in a hurry by replacing it with a 17-2 advantage.

Archbishop Hannan responded with seven runs in the second inning, but the Warriors were just getting started. They added five in the bottom of the second, four in the third and two in the fourth to finish off a 28-9 win that saw them outhit their opponent 17-3.

Ben Pearman led the team with four RBIs thanks to a grand slam in the opening inning that put the final four runs on the board.

Beyond that, Holcomb and Mac Bowman each finished with two hits and three RBIs, while Paracca led the team with three hits.

Walker also totaled three RBIs on one hit, while Arrington, Carson Foote and Edmondson each finished with two hits and two RBIs. Clay Meacham also totaled multiple RBIs in the win with two.

Even after all of the hits on Thursday, the Warriors didn’t take a night off on Friday, March 4, returning to the field to face Brookwood for a doubleheader.

The Warriors again got off to a dominant start in the opening inning of the first game, totaling nine runs for a quick 9-0 lead.

That was already more than enough with the strong pitching of Paracca, but Thompson added six more in the second, one in the third and one in the fourth to finish off a four-inning 17-0 win.

Remarkably, Pearman hit a grand slam for the second game in a row. He found consistency at the plate as well, finishing 3-for-4 with five RBIs and three runs scored. McBride totaled three RBIs on two hits, including a home run, while Bowman also finished with three RBIS on two hits.

Arrington finished 1-for-3 at the plate with two RBIs, while Edmondson added two hits and one RBI. Foote and Paracca each had one hit and one RBI in the victory.

Paracca’s performance on the mound saw him go all five innings, striking out five and allowing five hits in the shutout win.

The excitement continued for the Warriors into the second game of the doubleheader, which was a thrilling battle that took 11 innings to determine a winner.

Thompson jumped out to a 6-0 lead through four innings of play, but Brookwood responded with four in the top of the fifth to draw within two.

The Warriors, however, still led by two and added another insurance run in the bottom of the fifth to take a 7-4 lead.

That advantage held up going into the seventh inning, but Brookwood wiped it away with three runs to tie the game, ultimately forcing extra innings.

After three scoreless innings and a scoreless top of the 11th, the Warriors came to the plate in the bottom of the 11th and quickly regained their offensive composure.

Pearman led off the inning with a single, which was followed by a walk-off RBI double from McBride for an 8-7 win.

Following that exhausting two-day stretch and an marathon 11-inning game, the Warriors came back the next day and found the energy to continue the win streak against Hazel Green.

The Warriors fell behind 6-2 through four innings of play, but a nine-run bottom of the fifth quickly erased the deficit and put them in front 11-6.

Hazel Green battled back with two runs in the top of the sixth to draw within three, but Thompson scored three more in the bottom of the sixth inning, which was enough to hold on for the 14-10 victory.

Holcomb led the way in the win, going 3-for-5 with three RBIs, while McBride finished with two hits and two RBIs. Foote and Paracca each added two hits and one RBI, while Bowman added one hit with two RBIs.

Pearman, Walker and Arrington all finished with one hit and one RBI.