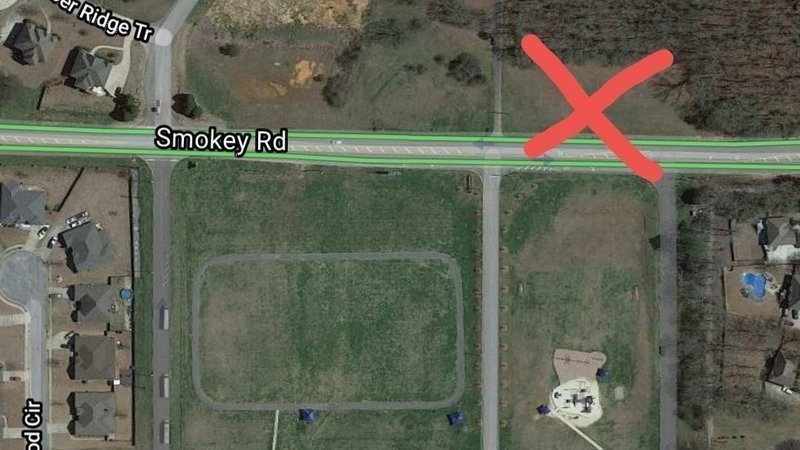 Above is the area where the proposed gas station would be located near Meadow View Elementary school in Alabaster. (Contributed)

ALABASTER – Almost 600 residents in Alabaster have signed a petition against the construction of a gas station near Meadow View Elementary School on Smokey Road.

The petition states the proposed construction would pose a “significant” safety risk to the staff and students at the school, due to the playground being located across the street, and down an embankment from the gas station.

Other concerns cited in the petition include the increase of auto accidents in front of the school near where children often play, and the increased numbers of fuel tankers frequenting the station as well as the storage of fuel at the station posing a risk to the school.

The property, at 2737 Smokey Road, is currently an unzoned parcel of land in unincorporated Shelby County, abutting Alabaster city limits, according to a letter composed by Alabaster Mayor Scott Brakefield to the Shelby County Commission in November 2021 regarding the property.

“This type of intense commercial development is not in keeping with the character of the surrounding residential properties along Smokey Road nor the elementary school directly across Smokey Road from this proposed development,” the letter states. “The increased lighting, noise, litter and traffic inherent with gas stations is not compatible with the residential nature of the area.”

The letter went on to state that if the gas station was constructed, it would increase traffic conflicts, which already remain congested in the area, due to the entrance being misaligned with the entrance to the elementary school.

The city of Alabaster acknowledged that the plan for the development does not include appropriate buffers or fending to separate it from the adjacent house or the nearby Forest Ridge subdivision.

Other concerns noted in the letter to the commission included the fact the frontage is only 190 feet wide and will require the development to be shoehorned into a narrow lot; the grading of the site will require clear-cutting of the site to fit the development, eliminating needed buffers and increasing storm water runoff for the area; the site is too small and constrained to provide proper traffic flow into the site and inside the development; and the long-term viability of the site is in question since it is isolated from commercial areas and will likely leave an abandoned commercial site as a future eyesore.

The city of Alabaster said in the letter to commissioners that it strongly opposed the development moving forward.