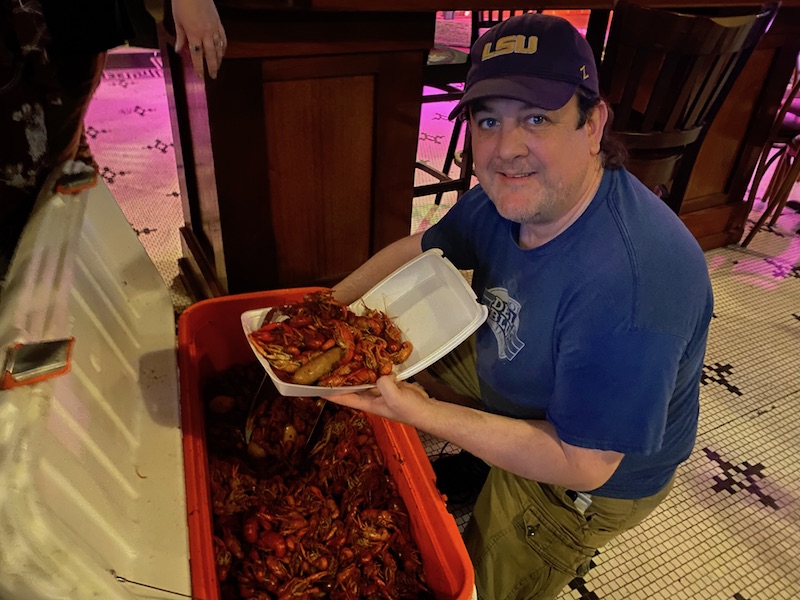 Pelham favorite Delta Blues Hot Tamales passed out crawfish outside Dave’s Pub in Birmingham on Sunday, March 6 to raise money for nonprofit Sunflower of Peace, which is dedicated to providing medical and humanitarian aid for the people of Ukraine. (Reporter Photo/Michelle Love)

PELHAM – Pelham’s Delta Blues Hot Tamales made a trip to its old stomping grounds in downtown Birmingham for a charitable cause on Sunday, March 6. The restaurant’s owners Adam and Fawn Freis were passing out crawfish outside Dave’s Pub as part of an evening dedicated to raising money for the people of Ukraine.

Dave’s Pub partnered with Delta Blues and Cahaba Brewery to raise money for Sunflower of Peace, which is a U.S.-based nonprofit organization whose mission is to provide medical and humanitarian aid for those impacted by the violence occurring in the Ukraine.

The current owner of Dave’s Pub used to work with Adam and Fawn when Delta Blues was located in their former Cobb Lane location, and he reached out to the couple about participating.

“He called me saying he wanted to do something, and he knows we’re like-minded, and he asked if we would be interested in participating. We of course said sure,” Adam said.

The bar was full of guests from all corners of Shelby and Jefferson County who came out to show their support. The patio was full of people messily eating crawfish, potatoes and alligator sausage while a live band played inside.

Guests were suggested to make donations of $15 or $20 but were welcome to donate more if they chose to. Cahaba Brewery offered free merchandise such as drink cozies and stickers, and there was a raffle for various prizes including a Yeti cooler and a free bar tab. Adam said Delta Blues donated their services free of charge for the evening.

At the end of the evening, they managed to raise over $1,000 for the charity, and Adam said they went through close to 200 pounds of crawfish.

Getting involved in such a noble cause took no hesitation from Fawn and Adam, as they both said they try to always lean towards compassion.

“Whenever there’s a crisis going on like that, anything we can do even if it’s not that big, it’s worth the time and effort because there are innocent people being killed, and we wanted to do whatever we could to try and help them,” Adam said.

Delta Blues does crawfish boils several times throughout the year. Fawn and Adam said they are currently working through the details of their crawfish boil set for April 3, and they will announce the detail as it gets closer to the date.

Having such a profound response from the community meant everything to everyone involved, according to the Freises. They said they thoroughly enjoyed getting involved in the community, helping the people of Ukraine and seeing familiar faces downtown on that charitable Sunday.

“It really hits hard knowing there’s a lot of people in our community who are interested in helping people in need,” Adam said. “A lot of people came in and made donations that are significantly larger than the suggested donation, and that make me really happy to see. We just want to let it be known we’re thankful that people stepped up and helped out in what’s a really just cause.”