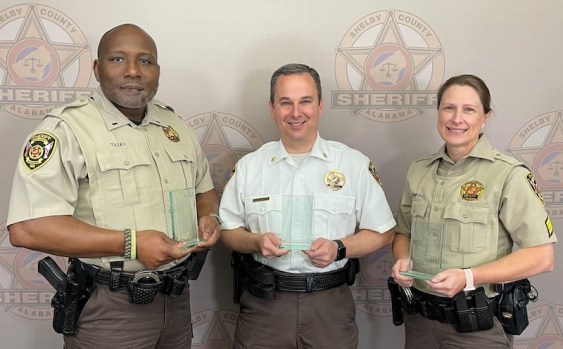 COLUMBIANA – Sheriff John Samaniego said he is proud to recognize Major Clay Hammac, Lieutenant Deon Tilley and Sergeant Debbie Sumrall for their recent award of the prestigious FBI-Trilogy Award in a press release from the SCSO.

Upon completion of each course, law enforcement officers are recognized as recipients of the FBI LEEDA’s Trilogy Award.

Major Hammac is the Operations Commander of the Sheriff’s Office, Lieutenant Tilley serves as a Patrol Watch Commander and Sergeant Sumrall serves as a Unit Supervisor in the School Resource Officer Unit.

“We are incredibly blessed,” Samaniego said. “The men and women of the Sheriff’s Office continue to challenge themselves and raise the standards of professionalism within our agency. These awards are just the most recent example of our deputies choosing to go the extra mile to make sure the services provided to Shelby County are the best in the profession.”

Currently, there are other members within the Sheriff’s Office who are participating in the completion of the FBI trilogy series for executive-level leadership development and three previous recipients of the Trilogy Award.