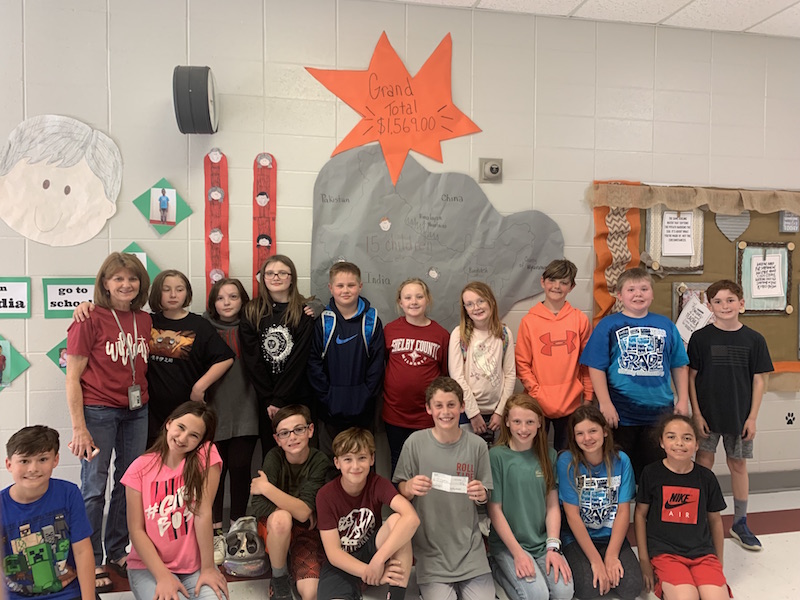 The Serve Team at Shelby Elementary School spearheaded a schoolwide fundraising service project that will help 16 children living in poverty in India to go to school for a year. (Contributed)

Students are getting more than just an academic education at Shelby Elementary School. In the past month, this tiny south Shelby county school has had some great lessons in how hard work and kindness can pay off in all kinds of ways.

In addition to receiving a parks and rec grant from the Shelby County Commission that will allow the school to make upgrades to its playground, the fifth grade classes participated in an E3 (Engaging Elementary Engineers) event with other schools in the county where they won STEAM awards for first place for coding and in art.

Their greatest reward this past month however was a different kind of reward. They learned how good it can feel to help others for no other reason than because it’s the right thing to do.

The Shelby Elementary Serve Team consists of about thirty of the school’s upperclassmen who volunteer to serve their school and community in several different ways.

Any student in fourth or fifth grade can join the team as long as their behavior is in good standing. Principal Stacy Aderholt said these students do everything from cleanup chores to making sure the flag is raised and lowered each day. They also commit to working on service projects that benefit others.

Their most recent service project ended up reaching halfway around the world to India when the Serve team managed to raise enough money for 16 children, who could not otherwise afford an education, to go to school for one year.

For each $100 dollars the team raised, they could send one child to school in India for an entire year.

They exceeded their goal of $1,000 by $600. The Serve Team came up with an action plan that allowed them to go to each grade and explain their goal with a power point presentation that taught their younger schoolmates about the differences in education and finances in a country much poorer than theirs.

“This has made me so happy I could cry,” Aderholt said. “They just showed their teachers how much they value and love their own education by working so hard to provide other children with what they have.”

The entire school, as well as their families, embraced the idea. Children raised money through their churches and many asked for extra chores they could do at home to raise more money.

They had fun with the project too, holding a schoolwide Auburn vs. Alabama coin drive.

Because the teachers guiding the students wanted the kids to understand the importance of how every penny should be used for this important project, the only reward for the winning team was hearing one of their hard core Alabama fan administrators, Chrissy Shaler, reluctantly shout, “WAR Eagle” at the top of her lungs in front of the entire student body.

The Alabama fans, however, were given another chance to win after the first round, when a rematch meant an Auburn-loving Aderholt had to yell “Roll Tide” when the tides turned in the rematch.