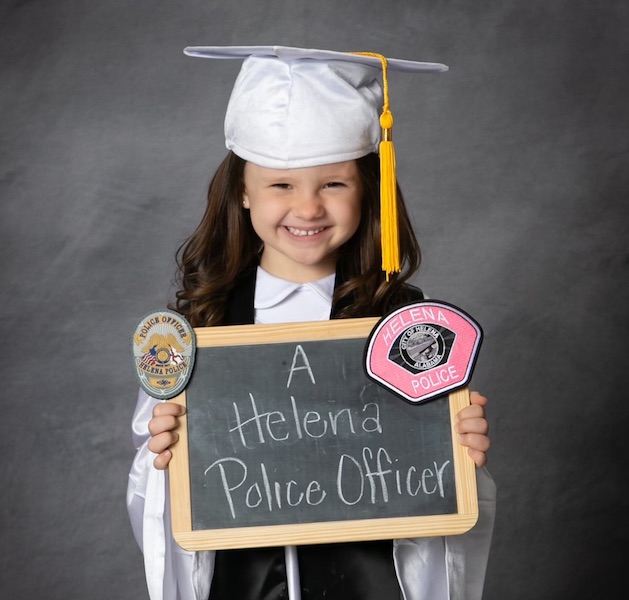 HELENA – Helena Police Department has a new honorary officer on deck in the form of five-year-old Ellie Grace Guy.

“We’d like to introduce HPD’s newest junior officer, Ms Ellie Grace Guy!” the police department wrote on its Twitter page next to a picture of Ellie holding her badges, a smile stretched on her face from ear-to-ear. “Chief Flynn learned she surprised her parents that she wanted to be a police officer when she grew up, and that she really wanted her own badge. Done!”

“For their graduation pictures, they asked us to bring a prop for whatever they wanted to be when they grew up,” she explained. “I texted Melanie [Police Chief Brad Flynn’s wife] and asked if Chief Flynn would have any give away things for her to hold up for her picture. The next day he brought it up to my husband at the high school for her to have for her graduation picture.”

“She thought she was all official,” Lee Anne said.

Ellie’s desire to be a Helena police officer is no surprise to her parents. Lee Anne said her child has been a “first responder-obsessed type child” her whole life.

“Every time she sees a police officer like Officer Flynn, she just loves them. She’s always been drawn to them,” she said.  “She loves the bright lights, and any time there was a police officer or saw an ambulance she was always asking questions.”

Lee Anne said it’s always been important to her and her husband to make sure Ellie sees police officers as friends who are there to protect you.

The police department even offered the chance to take Ellie on a “patrol” of sorts to fully deputize her as a Helena police officer.

“They do these little in-school field trips where the officers came to her school, and of course she told them she wanted to go for a ride in the car,” she said. “They took her picture in the car and they told her they would love to take her on ‘patrol’ with them. We haven’t scheduled it yet, but that’s something we’re going to plan in the near future.”

Having Flynn and the police department go to such lengths to make Ellie feel special made Lee Anne and PJ feel more than proud of their daughter, but proud of the Helena PD.

“The way that our entire police staff in Helena is dedicated to our community is incredible,” she said. “I feel they truly take the time to do small things like that for our kids, and it’s always the utmost importance for them to take care of Helena people…the way they love on our kids and students, the community as a whole, it’s really special.”