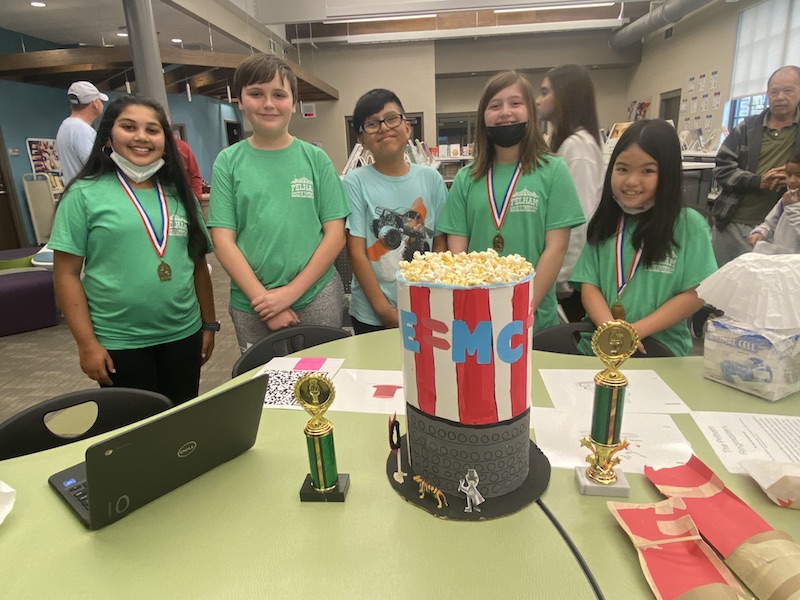 Students in the Pelham Ridge Elementary STEM program brought home five out of eight awards at the E3 STEM Team Showcase competition. The competition was divided up into categories like art, design and an aerial egg drop to showcase what the students have learned in their program. Pictured are winners Avi Desai , Levi Cummings, Oliver Sanchez, Olivia Parr, Thao Nguyen with their winning ringmaster’s hat. (Reporter Photo/Michelle Love)

PELHAM – Students of Pelham Ridge Elementary’s STEM (Science, Technology, Engineering and Mathematics) program were all smiles on Tuesday, March 8 as they presented their wins from the recent E3 STEM Team Showcase.

The Team Showcase allows students in STEM programs the opportunity to come together in teams to present the skills and information they’ve learned in their programs while executing different challenges. The awards were based on categories of art, design and execution, and there were eight awards total. Of the eight awards, Pelham Ridge STEM students won five.

Teachers and parents were crowded around the library tables to admire and beam at the students’ hard work. For the art part of the challenge, each team had to create a ringmaster’s hat that was presented on the table and judged based on execution and appearance. The aerial event was an egg drop where the students had to assemble a device that would efficiently keep an egg safe from a high drop to the ground. Every Pelham Ridge team placed in the design challenge.

The students were not allowed help at the competition and were left to build everything themselves, which makes their wins that much more special, according to Abby Mebane, a math instructional coach at the school and a Leader in Me resource support staff member.

“Everything parents are seeing at the tables are student-created,” Mebane said. “We’re a Leader in Me school, and we want to empower students so they know they’re capable to do things themselves. It’s just so cool what all they’ve accomplished.”

“They are so kind and smart, and it’s so amazing for them to come together as a team,” Reeves said. “They have come so far, and we’re really going to miss our fifth graders next year.”